Kentucky could owe more than $2 million in gay marriage fight

By John Riley on December 29, 2015 @JohnAndresRiley 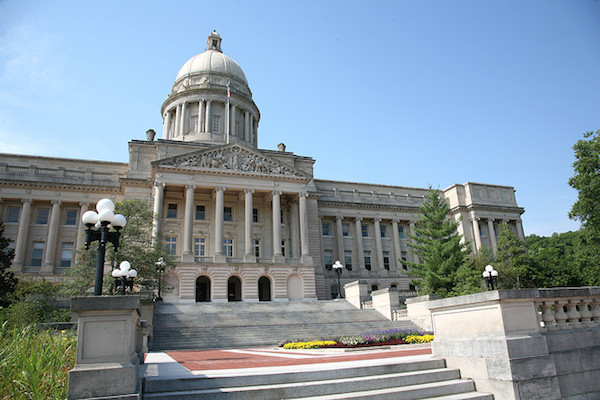 Kentucky Gov. Matt Bevin (R) may have leveraged his opposition to same-sex marriage to get into the governor’s mansion, but, as with any benefit, there’s always a cost. Think somewhere in the range of $2 million, courtesy of Bluegrass State taxpayers.

As governor, Bevin is charged with settling with the lawyers who challenged Kentucky’s ban on same-sex marriage and won, following the Supreme Court’s decision to legalize marriage equality in June. The nine-lawyer team is seeking $2,091,297, which includes a 75 percent enhancement for what they say was “groundbreaking” work on an unpopular case, reports the Courier-Journal.

Of course, Bevin is not solely responsible for the money that Kentucky is on the hook for, as former Gov. Steve Beshear (D) — against the legal advice of then-Attorney General Jack Conway (D) — decided to appeal a ruling overturning Kentucky’s marriage ban, a move that had popular support among the majority of people in the commonwealth.

Under federal law, the losing side in a court case must pay the winner’s legal fees. But Beshear offered to pay only $581,000 in November, which the pro-marriage side rejected. Lead attorney Laura Landenwich called Beshear’s offer “infuriating.”

“His public stance was that ‘we need the Supreme Court to decide this,'” she said of Beshear,” adding that he “knew very well the state would have to pay for that venture.”

Bevin has two options: he can either settle with the lawyers directly, or he can wait for Senior U.S. District Judge Charles R. Simpson III to decide what constitutes a reasonable attorney fee. But the marriage case victors could always appeal Simpson’s ruling, thereby potentially increasing the amount they will receive.

The Courier-Journal reports that, of the three states whose bans on same-sex marriage were tried along with Kentucky’s, the state of Ohio settled for $1.3 million, while Michigan settled for $1.9 million. The lawyers who challenged Tennessee’s bans are still negotiating with the governor’s office in the Volunteer State, but have asked for $2.3 million.

The lawyers that were hired by Beshear to defend Kentucky’s unconstitutional ban say that the Kentucky lawyers’ request for more than $2 million is not a “reasonable” fee, arguing that the number is overinflated and includes charges for doing media interviews and flying to California to consult with a Stanford University law professor. Beshear’s lawyers also point out that none of those lawyers even argued the case before the Supreme Court.

But the attorneys say their ability to do business in the commonwealth — particularly in more rural areas of Kentucky where LGBT rights are unpopular — has been hampered because of their willingness to take up the case challenging the ban. Additionally, they say that the enhancement — which can be tacked on in cases where there are extraordinary results — is perfectly valid considering the case dealt with complex issues that heretofore had never been litigated and resulted in the sweeping legalization of marriage equality across the country.

“Gov. Beshear wanted to fight and he got a fight,” Landenwich said. “Now they have to pay for it.”