By John Riley on December 11, 2015 @JohnAndresRiley 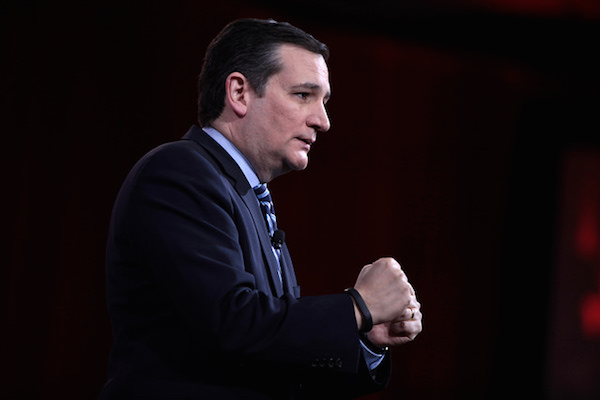 Presidential candidate Sen. Ted Cruz (R-Texas) is slowly starting to emerge as the consensus choice among establishment figures within the socially conservative wing of the Republican Party, earning both the endorsement of evangelical Bob Vander Plaats and the backing of the National Organization for Marriage (NOM).

Vander Plaats, the head of the FAMiLY Leader, a socially conservative political organization that stresses traditional Christian views on topics like abortion and same-sex marriage, called Cruz a man of “deep character” who is both “competent” and has the necessary infrastructure to emerge victorious from what will be a bruising Republican presidential primary.

“I happen to believe that the extraordinary leader that we need for these extraordinary times is U.S. Sen. Ted Cruz,” said Vander Plaats. “As you’ve seen in the polls, he’s beginning to rise. Not only will he be really, really strong here in Iowa, we believe he will be strong in the early states and we believe he can be the nominee to take on and defeat Hillary Clinton and the leftist agenda.”

Vander Plaats’ support of Cruz was hailed as the third key endorsement for the Texas senator, with news outlets trumpeting that Cruz had won the “trifecta” of trusted conservative voices that could help sway voters to support his candidacy. Cruz previously received the endorsement of U.S. Rep. Steve King, known for both his socially conservative views and his hard-line stance against illegal immigration, and conservative radio host Steve Deace. He has also received the backing of influential conservative Richard Viguerie, the chairman of ConservativeHQ.com, a website dedicated to “relaunching the conservative movement” and wresting control of the party away from the more establishment wing of the GOP.

Cruz also earned the backing of NOM, the key organization leading the fight against marriage equality, on Wednesday.

“Sen. Ted Cruz is a proven champion for marriage and religious freedom and someone we can absolutely count on to fight to restore marriage to our nation’s laws and defend the religious liberty of the tens of millions of Americans who believe that marriage is the union of one man and one woman,” Brian Brian, president of NOM, said in a statement. “Sen. Cruz has not only signed NOM’s presidential marriage pledge committing to take specific actions as president, but he has personally authored the pending federal marriage amendment to restore the right of states to define marriage as one man/one woman. Moreover, he has spoken out consistently and forcefully on the campaign trail as an advocate of true marriage. We are pleased to endorse him and will do everything in our power to support his election.”

By signing NOM’s marriage pledge, Cruz — as well as presidential candidates Ben Carson, former Sen. Rick Santorum (R-Pa.), and former presidential candidate Gov. Bobby Jindal (R-La.) — agrees to push for a federal constitutional amendment banning same-sex marriage, push for an overturn of the Supreme Court’s decision in Obergefell v. Hodges that legalized marriage equality nationwide, reverse any pro-LGBT executive orders issued by the Obama administration, support the First Amendment Defense Act to provide special protections for people who oppose homosexuality or same-sex relationships, and order the Department of Justice to investigate incidents of alleged “harassment” of social conservatives who have spoken out against or donated money to defeat same-sex marriage. NOM also spoke highly of former Gov. Mike Huckabee (R-Arkansas) and Sen. Marco Rubio (R-Fla.) and has said that should they emerge as the nominee instead of Cruz, NOM will happily support their candidacies.

“It is imperative that a proven marriage champion emerge from Iowa and go on to capture the Republican nomination,” Brown said. “Too much is on the line for supporters of marriage to sit on the sidelines and take the risk that the Republican nominee is someone who will not fight to restore marriage to the law in our nation. We are at a historic moment, and we urge all conservatives to unite behind Sen. Ted Cruz, a man of principle we can all count on to give his all to the cause of marriage and religious freedom.”

John Riley is the local news reporter for Metro Weekly. He can be reached at jriley@metroweekly.com
← Previous Story Reproductive Rights Alliance
Next Story → Right-wing groups sue over “fix” to Indiana’s RFRA law