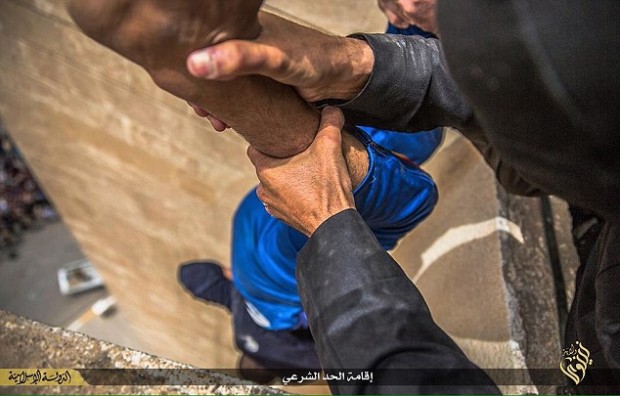 ISIS militants hold a man over the edge of a building, File Photo

ISIS, the terrorist group attempting to establish their own caliphate in the Middle East, has apparently murdered 25 men in Syria accused of being gay.

According to the Syrian Observatory for Human Rights, a British monitoring group, the 25 men were executed in various ways after being convicted of homosexuality in ISIS’s Shariah courts, the Independent reports. ISIS follows a strict interpretation of Shariah law that mandates the death penalty for homosexuality, among a number of other crimes, including adultery and apostasy.

Sixteen of the men were killed by being thrown from the roofs of high-rise buildings, six were stoned to death, and a further three were shot in the head. Those that survived the fall from the buildings were then stoned to death by ISIS fighters waiting on the ground, according to the report, which also states that two of those executed were under 18.

The latest horrific executions by the brutal regime come amid reports that a 15-year-old boy was thrown from the roof of a building after an ISIS leader engaged in a sexual relationship with him. Abu Zaid al-Jazrawi was spared death and instead sent to fight for ISIS in Iraq, where a resurgent army has clawed back ground from the terrorist organization.

Rhuaridh Marr is Metro Weekly's online editor. He can be reached at rmarr@metroweekly.com.
← Previous Story Teenage boy executed by ISIS for being gay
Next Story → Trans passenger humiliated after airport security asked him to remove prosthetic penis