Deadpool is a middle-finger to convention, restraint and child-friendly action

) is an R-rated superhero film at a time when family-friendly, PG-13 fare is the norm. This isn’t Disney’s interpretation of Marvel’s comics — far from it. Deadpool is sexual, sadistic, violent, intensely meta, profane and totally against being a stereotypical superhero movie. At a time when parents blame everything but themselves for influencing their children, a superhero who actively revels in evisceration and ejaculation is a legal department’s idea of hell. The very existence of the film is testament to Hollywood’s reticence to take risks: Deadpool languished in developmental hell for over a decade.

Thankfully, however, it is finally here. It lacks the swollen budget of its Marvel stablemates — a “mere” $58 million, whereas Iron Man had $140 million bestowed upon it. Even last year’s dreadful Fantastic Four reboot warranted $120 million. It lacks a name-brand director, with first-timer Tim Miller at the helm. It also lacks 3D, something of a staple/gimmick of CGI-dense superhero films.

Deadpool also has a main character with whom most viewers will be unfamiliar. As such, the unorthodox action film is actually incredibly formulaic at its core — it’s yet another superhero origin story. Deadpool, alter-ego of Wade Wilson, is a mercenary for hire who undergoes an experiment that results in him gaining superhuman abilities, while in the process gaining a foe who he will ultimately try to destroy. So far, so samey.

Indeed, the formulaic plot is Deadpool‘s greatest weakness, if only because everything else about the film defies genre conventions. If you’ve ever wanted more impact from the fights in a superhero film, you’re in luck, as heads literally roll here. Bodies explode in blood, knives rip through flesh, bullets leave gaping holes. Deadpool revels in its R rating, showing the real impact of a superhuman punching someone in the face. Captain America may grunt and enemies may fly backwards in his franchise, but in reality, bones would crunch and people would scream — and that’s exactly what happens here.

Everything about Deadpool offers something for those unsatisfied with the watered down antics of other superheroes. When he’s angry, Deadpool throws out fucks with gay abandon. When he’s aroused, he has no issue telling whomever is closest — man or woman. He drinks, he dabbles in drugs, he masturbates. He’s a three-dimensional character, with flaws, idiosyncrasies, and a list of psychoses. He inhabits a world of fantasy, but decoupling from the restraints of PG-13 brings it closer to reality.

Conveying all of this is a humorous tone that eclipses anything we’ve seen from past superhero films. Joss Whedon was rightfully hailed for his witty dialogue in the first Avengers film, but Deadpool could be classed as a full-on comedy without any complaints from the audience. Rhett Reese and Paul Wernick’s script may have a predictable plot to follow, but it courses there with a bounty of jokes. From the amazing opening credits to the film’s close, Deadpool constantly manages to draw laughter, whether it’s revelling in genre stereotypes, lampooning lead star Ryan Reynolds (including a subtle reference to his failed outing as Green Lantern), breaking the fourth wall at every possible moment, offering gross-out laughs, or just engaging in snappy dialogue. That it can be so consistent in its comedy while throwing so many styles around is testament to the appeal not only of the script, but also the delivery.

Deadpool was a passion project for Ryan Reynolds and he feels perfectly cast as its lead. His charm, his grasp of comedy, the way he wonderfully fills that tight, red costume — it all works together to make Deadpool irresistible, regardless of whether he’s shooting people in the head, slicing his own hand off, or struggling with his emotions.

It helps that the cast surrounding him are similarly on point. Morena Baccarin is just the right combination of smouldering, damaged, delicate and strong as Deadpool’s girlfriend, going toe-to-toe with Reynolds whether they’re trading insults or she’s penetrating him with a dildo. (This really isn’t Disney’s Marvel.) Ed Skrein is cool and menacing as Ajax, the architect behind Deadpool’s new powers and his eventual enemy, who possesses enhanced strength and reflexes, feels no pain, and lacks the emotions that power Deadpool’s talkative nature and constant joking. Leslie Uggams shines in her few moments onscreen as Blind Al, Deadpool’s cocaine-addicted roommate. Brianna Hildebrand steals focus as moody, teenage X-Men member Nagasonic.

There are numerous standout moments in Deadpool, from the dozens of references it deploys, to Miller’s confident handling of its action scenes, to almost every moment Deadpool breaks the fourth wall by talking directly to the audience. It’s far from perfect — the CGI, for instance, is notably lacking compared with bigger budget films — but, as a whole, it represents something more. Yes, the underlying tale of good versus evil and a hero rising to defeat a powerful enemy has been told dozens of times before, but Deadpool is a glimpse of a future where more comic book films are unshackled from the restraints of appealing to everyone. That future, like this film, is where Deadpool gleefully resides. 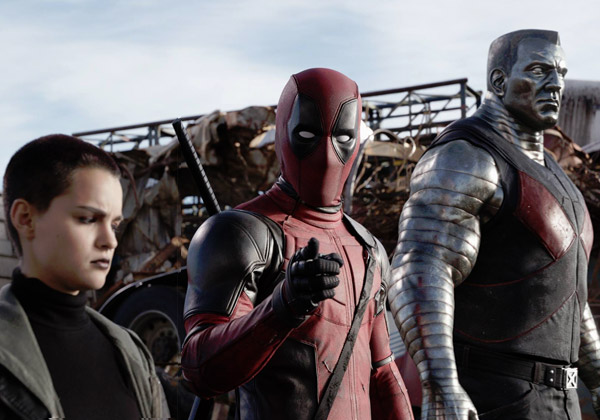