Firewatch is all about story. It's intimate, personal, involving and engrossing.

There’s a confidence to Firewatch (

) that is startling given its origins. Born from a freshman studio of about a dozen people, this little indie game has managed to generate an almost disproportionate amount of excitement. It helps that developers Campo Santo have kept details of their beautiful world almost entirely under wraps. As such, I went into Firewatch blind beyond oblique trailers and a few press shots. Within ten minutes, I’d fallen deeply in love.

From the outset, Campo Santo’s vision is clear. Firewatch is all about story, for better or worse. It’s intimate, personal, involving and engrossing. Its story envelops you, drawing you into the mysteries and questions that proliferate its little slice of fantasy.

The opening moments lay out its backstory (which, for the sake of keeping the experience intact, won’t be spoiled here). You are Henry — verbatim, that’s how the game opens. What follows is a simple, text-based intro to Henry’s adulthood: a burgeoning relationship, his hopes for the future, glimpses into his personality. Emotional devastation unfortunately follows, which leads to burly, bearish Henry packing everything up and driving from his Colorado home to the Shoshone National Forest, on the edge of Yellowstone in Wyoming.

As the title suggests, Henry is there to watch fires during the summer months, staying in his tower and radioing for help should he spot any troublesome blazes. Stepping out of the dense melancholy of the game’s opening moments and into the fresh, vibrant air of Firewatch’s main area is refreshing — even more so when a friendly voice suddenly cuts through the silence, the game’s first moments of dialogue.

It’s Delilah, Henry’s boss and a watcher in the next region over. Speaking through walkie-talkies, their back and forth over Firewatch’s runtime is what ultimately makes the game so fantastic to sink into. It helps that the writing is excellent: the language is natural, there’s unforced humor, Delilah and Henry bicker, banter, commiserate, comment and offer friendly jabs. Their relationship is conducted entirely by voice — and what’s more, it can be shaped by the player to suit their own means for Henry. If you don’t care for Delilah’s interjections and comments, don’t respond. If you want to discuss every little thing with her, feel free: certain objects in any given area can be highlighted and discussed, each interaction deepening the connection between both characters. You can also pick different responses — there’s a full dialogue tree, letting players flirt, admonish, ignore, or collude with Delilah to their heart’s content.

On my second playthrough I tried to deliberately ignore Delilah, but that lasted all of half an hour. When an indignant Delilah objected to one of my responses and stepped away from her walkie talkie, preventing me from talking to her, I was hurt. Her smooth, rich voice was gone, Henry was even more isolated, the silence of the landscape ever more deafening. I didn’t make that same mistake again.

Conversations are essential to making Firewatch what it is, as Henry and Delilah’s relationship mirrors larger themes present throughout the game: solitude, isolation, companionship, regret, and more are expressed through dialogue, as they discuss the various goings on over the course of their summer.

And what a summer. While Henry’s time in his tower starts benignly — investigating fireworks (a potentially massive fire hazard), checking on communication lines, collecting supplies — it devolves into a seemingly complex mystery. Firewatch unravels at its own pace, gradually building the atmosphere that carries through its six to eight hours of gameplay.

As you walk or jog around the Shoshone, clambering up rocks, rappelling down slopes, hacking through bushes, picking up objects and discovering locations, it becomes apparent that this isn’t an action game and Henry’s movements — while freely controlled — are fenced within a very specific narrative. Indeed, after the game’s first two days, which start with Henry leaving his tower on a specific objective, then returning at the end of the day, Firewatch begins to tighten the leash and take control. Days — even weeks — will blink past in short loading screens, as Camp Santo’s story takes shape. One day is given all of two minutes of gameplay. Players are dropped into Henry’s body, there’s a few short pieces of dialogue, then it’s suddenly a week later.

If it sounds haphazard, it isn’t. Instead, it’s the sign of a studio entirely sure of their central narrative. Campo Santo knows the story it wants to tell: one comprising mystery, suspicion, paranoia and exploration as the Shoshone reveals itself to be full of more than just an ever-increasing fire. Indeed, as summer rolls on, that fire gradually builds on the horizon until smoke starts to fill the landscape. As Henry and Delilah become ever more confused — and, on more than one occasion, scared — about the goings on in the valleys and forests, the smoke thickens, obscuring vision and adding to the overall sense of confusion. It’s a metaphor deployed to wonderful effect.

That atmosphere, the slow build of the story, the isolation of the outdoors, they all work together to create — particularly in the game’s later stages — an abject fear of the unknown. Neither Delilah nor Henry can explain what is happening and it transforms Firewatch from a curious mystery into something approaching horror. As Henry clutches his walkie talkie and Delilah begs him to be safe, the dark of night, the cracking of twigs, the rustling of leaves, the whistling of the wind, all combine to make this big, beautiful landscape one of constant threat — and it’s entirely in the player’s head. That’s what makes it so impactful. There may or may not be danger, but you’re unsure, and that in itself is a powerful thing indeed and testament to Firewatch‘s prowess.

Really, everything about Firewatch has been lovingly thought through. It’s set in 1989, so there’s no smartphones, no mobile GPS, no personal technology beyond a disposable camera and a Walkman that appear later in the game. The UI reflects this: Henry navigates the old-fashioned way, by bringing up a map and breaking out an old-fashioned compass to get around. There’s no floating icons or guides here. If there’s a new objective to reach or trail to walk, Henry breaks out a pencil and jots it down. Firewatch is unashamedly disconnected from the modern world — just like Henry and Delilah.

It’s not perfect, however. While Firewatch’s narrative system allows players some degree of freedom, it’s ultimately not enough. On my first playthrough, Henry was tied down by his past, hampered by the guilt and emotion he’d tried to escape in Wyoming. I did that to him through the choices I made. On my second time through, Henry was resolutely trying to move on, to put it behind him, to not dwell on the past when talking with Delilah. Unfortunately, the game’s ending — while poignant — was only more heartbreaking that second time around. Campo Santo offered false hope through my choices and that hope was shattered as I reached its conclusion. Yes, it again speaks to their confidence in giving players a specific ending with only minor differences in dialogue, but it didn’t help the empty pain I felt that second time around. I tried to reshape Henry’s story, but ultimately still had to bend to Campo Santo’s will.

There’s also, at least on PS4, some rather jarring performance issues to contend with. Campo Santo recommends that players experience Firewatch on a competent gaming PC and it’s clear to see why. While those on Sony’s console will have the same gorgeous art style, which is cartoony, dreamy and vibrant, they’ll also have frequent framerate drops, stutters and pauses — especially when moving between locations or when the game saves. That they don’t ruin Firewatch is testament to the strength of its experience, but they’re certainly irksome.

Then there’s the issue of size and length versus cost. Firewatch retails for $20. Players are restricted to one specific region of the Shoshone. It can be fully explored and the story finished in, at most, eight hours. If you eschew exploration in favor of working through the story, completion shrinks to a couple of hours. For some, it might not be worth it.

However, it unequivocally is. Firewatch does raise the question of whether it qualifies as another walking simulator — sure, you can interact with objects and there’s very basic puzzling, but this is largely a narrative-driven game that you’re very much guided through. Take the time to commit to it, though, and you’ll reap its rewards.

Explore each detail that Campo Santo has crafted, revel in Henry and Delilah’s relationship, slowly unpick the game’s central mystery, and those twenty dollars will feel like the easiest you’ve ever spent.

Firewatch is available on PC, Mac, Linux and PS4. 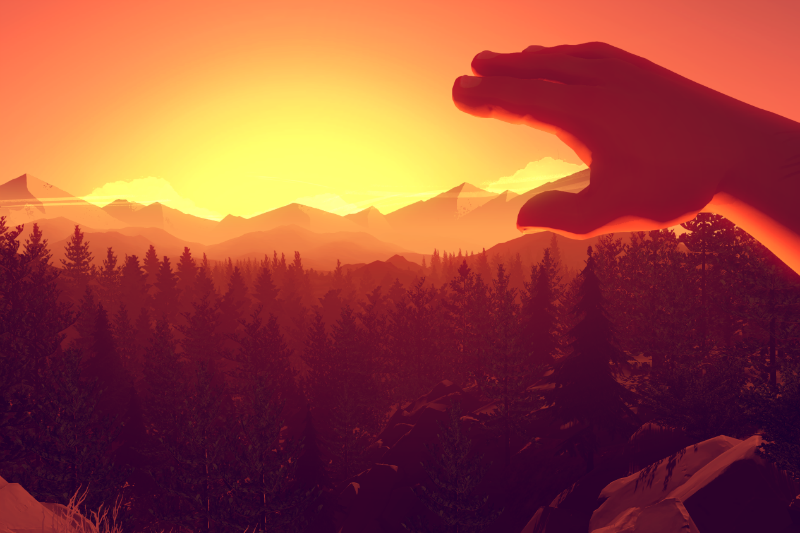