Sit back and enjoy the Trump and Friends extravaganza, because you don’t really have a choice 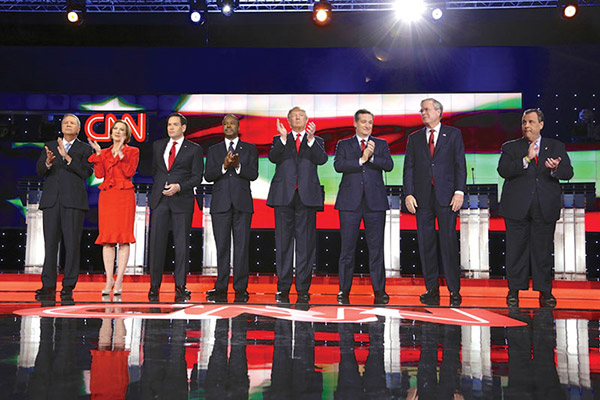 Last night in New Hampshire, the first voters in the nation asked a question that seems suited for a late-night, weed-fueled, dorm-room debate: “If both parties nominate an unelectable candidate, how can anyone win an election?”

It’s a stupid question fit for what so far has been a pretty stupid election cycle. Now, I’ll be the first to admit that stupid can be entertaining. Has there been a funnier campaign moment in recent memory than Ben Carson pulling a Spinal Tap, unable to make his way to the debate stage? Carson really is an aspirational figure for everyone, whether you see him as proof that even a smart man can fail or as an example that if someone as addled as he can do it, anyone can.

Alas, we likely won’t have Carson around much longer given his last place finish in New Hampshire — behind even kid’s-table-debate-champ Carly Fiorina — so we should savor these moments while we can. Especially because now that Donald Trump has effectively branded himself as the Republican Party, what was once an entertaining sideshow has become nerve-wracking exercise in “what if he really does it?”

The kicker to all this — the ponderous musings over whether Hillary Clinton’s campaign is dead or alive, whether Bernie Sanders is a phenomenon or flash in the pan, or whether John Kasich is a savior or a false hope — is that it comes from the electorate of two of our smallest, whitest states, reminding us again that our election system is objectively insane.

First there’s Iowa, where interested citizens don’t actually vote but instead gather in gyms and rec rooms to play Red Rover. Then it’s on to New Hampshire, the nation’s gatekeeper to the White House, where a non-representative slice of America winnows down the field so their fellow citizens won’t need to bother learning about so many different candidates.

All of which proves, high drama cable news stories aside, we don’t take voting very seriously in the U.S.

Iowa’s a gimme, because the lack of secret ballot voting is baldly antithetical to what American democracy is supposed to be. In New Hampshire, a state that takes pride in its irrational and unwarranted position as kingmaker, we saw a miles-long line of cars waiting to vote in the only polling place set up for a city of 27,000 people.

“In those states where many people of color actually live, state legislatures are merrily passing voter ID laws that suppress their votes.”

Again, that’s in a state that considers itself a model of democracy. It only gets worse from there.

I was recently in Australia and watching the U.S. through the eyes of their media was a learning experience. For one thing, they know a lot more about us than we know about them. Basically every Australian I spoke with wanted to know about Trump, Ted Cruz, the east coast blizzard, and why the NRA was misrepresenting Australia’s strict gun laws. Americans would be hard pressed to name an Australian prime minister or even the nation’s capital. (Don’t be embarrassed, I didn’t know the capital either until I went there. It’s Canberra, by the way.)

In addition to driving on the left and the water spiraling the wrong way down the sink, Australians do elections differently than we do. Mainly, they’re required to vote. Imagine that: mandating that citizens in a democracy participate in the selection of their own government, or pay a reasonable fine.

Naturally, this would never happen in America because freedom.

I elicited a lot of “You’re kidding, right mate?” when explaining that we vote on a Tuesday, rather than a weekend or holiday, and that our states are passing laws intended to limit voter participation.

I’m not saying that we should aspire to be Australia, because no democracy is perfect and they have their own bundle of problems. I am saying that for a country that envisions itself a model of democracy for the world, our electoral system is a joke. Just over half of eligible voters go to the polls for presidential elections; barely a third make it out for mid-term congressional elections. While white people will very soon make up less than half of our total population, the whitest of states enjoy disproportionate influence on who the rest of us get to vote for.

And in those states where many people of color actually live, state legislatures are merrily passing voter ID laws that suppress their votes, in sometimes darkly comic ways (as in Virginia’s voter ID law, which accepts gun permits but not college IDs).

Despite all the sound and fury of candidates on the stump, all the popcorn-passing politicos enjoying the show court side, and all the times we tell ourselves that this is how our citizens make their voices heard — it really isn’t. It’s a deeply broken system that holds no real hope for change because too many of the powerful fear any change would lessen that power.
So just sit back and enjoy the show, because someone else has already chosen the channel.