Bills referred by GOP-dominated house to Code Commission for review

By John Riley on February 18, 2016 @JohnAndresRiley 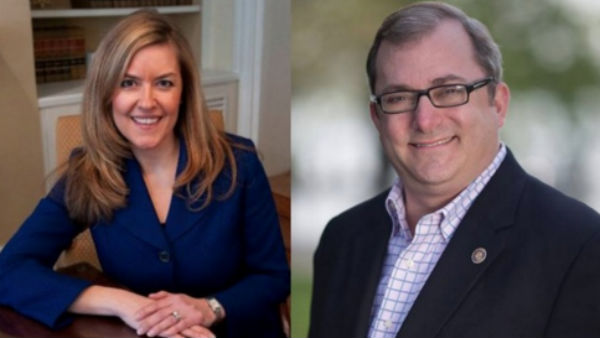 A Republican-led Virginia House of Delegates subcommittee killed two nondiscrimination bills that passed the Senate with bipartisan support, referring them to the Code Commission of Virginia for further review. State Sen. Jennifer Wexton (D-Leesburg, Sterling, Herndon), the lead patron of a bill that would have prohibited discrimination in housing, said she was “disappointed but not surprised” in the House subcommittee, which is stacked 5-2 in favor of Republicans.

“They’re punting the bill,” says Wexton. “I would not necessarily say that they ‘took up the bill.’ They knew what they were going to do before anybody spoke a word. I don’t believe there is a nexus between my bill and the bills they have been sending to the Code Commission. This is an anti-discrimination in housing bill. The bills that have gone to the Code Commission have had to do with gender terms in the context of marriage — husband, wife, things like that. They’re completely different.”

Wexton also says it was the House that recently voted 56-41 on a largely party-line vote to approve a “religious freedom” bill that would sanction discrimination against LGBT people in the commonwealth. And the particular subcommittee to which almost all LGBT-related bills have been referred is stacked in favor of extremely conservative Republicans with a history of anti-gay voting records.

“We’re very disappointed that they referred it to the Code Commission,” says Helen Hardiman, fair housing director for the housing advocacy group Housing Opportunities Made Equal (HOME) of Virginia, Inc. “I think that’s an inappropriate referral. The Code Commission is not going to be able to do anything on the bill. But I’m confident that the legislators who supported it this year, in both chambers, will be back next year pushing for similar bills.”

Hardiman says her organization did fair housing testing to measure the degree to which LGBT people were experiencing discrimination over the past two years in Richmond, Northern Virginia and Hampton Roads. HOME sent two pairs of emails — one from a same-sex couple and one from an opposite-sex couple — inquiring into rental opportunities. In 44 percent of all cases, the opposite-sex couple received various forms of preferential treatment.

“They’re punting the bill…. They knew what they were going to do before anybody spoke a word.”

“A 44 percent rate of discrimination indicates a problem in the commonwealth,” Hardiman says. “People are being denied their housing opportunities based on their sexual orientation. We know it’s a problem, and I think it’s time we addressed it legislatively. Twenty-two other states already have these protections, and I think the time has come [for them] in Virginia.”

The only vocal opposition to the bill, says Hardiman, seems to have come from religiously-affiliated groups and socially conservative organizations. Yet Wexton has cause for optimism in future sessions.

“Every year we’re doing better,” she says. “I carried this bill last year, and it died in the Senate General Laws Committee on a tie vote. This year, it passed the full Senate by a wide margin, with bipartisan support…. You just have to keep hammering away. You just keep trying. Sooner or later, people come around.”

The House subcommittee also defeated a measure that would have prohibited discrimination against LGBT people in public employment, which had also passed the Senate by a healthy margin with bipartisan support.

Sen. Adam Ebbin (D-Alexandria, Arlington, Mount Vernon), the chief patron of the equal employment measure, is also calling out his fellow legislators for refusing to allow an up-or-down on-the-record vote on the issue.

“They’ve realized, in 2016, that their bigotry doesn’t fly with the public,” he says. “And they’re looking for ways to shove what shouldn’t be a difficult question off to others, and evade their responsibility as legislators representing the views of Virginians. They are going to be held accountable for their prejudices.”

Ebbin also pointed to the “religious freedom” bill that passed the House on Tuesday, as an example of the hypocrisy of his fellow General Assembly lawmakers. Ebbin says his colleagues in the House have argued that they are sending all bills — whether pro- or anti-gay — to the Code Commission for further review. But he thinks they’re just trying to avoid dealing with LGBT-related issues.

“They’re looking for ways to shove what shouldn’t be a difficult question off to others, and evade their responsibility as legislators.”

“It is hypocrisy to represent that they will send matters of discrimination or all discrimination bills to the Code Commission, and then to pass the so-called ‘Government Nondiscrimination Act,’ which is anti-gay bigotry under the guise of religious freedom,” he says. “This is the ninth year that their subcommittee has failed to advance nondiscrimination protections for state employees, in spite of the fact that the full Senate has passed such a bill at least five times.”

Much of the opposition comes from lawmakers willing to kowtow to groups like the Family Foundation and the Virginia Assembly of Independent Baptists, who track and score votes taken on bills considered by the General Assembly, says Ebbin. Those votes can then be used to rally their supporters into mounting primary challenges to any lawmaker who refuses to march in lockstep with their conservative agenda.

Says Ebbin, “This is the result of redistricting, where you have legislators who are overwhelmingly concerned about primaries, rather than general electorates.”