PRODUCER: We have a problem. We need something to keep players interested in the Far Cry series. Something bold, something different. Something we can easily add on to Far Cry 4 and that won’t require much work.

PRODUCER: Precisely. What have you got?

PRODUCER: Literally anything. The bosses need some good publicity after the mess of Assassin’s Creed Unity.

DEVELOPER: Well, people really liked that bit in 4 where they entered Shangri-La and got to battle alongside a tiger. What if we made downloadable content that let them play more of that?

PRODUCER: Not bad. But it needs something extra.

DEVELOPER: Uhhh… Well, they also liked the hunting and crafting, so what if we let them use the tiger for that, and make it an essential part of the gameplay, getting food and stuff?

PRODUCER: Do you mean like a survival game? Those are hot right now.

DEVELOPER: Yeah! And what if there were no guns? They had to rely on basic tools. Just bows, arrows, spears, clubs? We could set it in prehistoric times, thousands of years before the main story!

DEVELOPER: No, it’s pretty simple, we just re-skin the Far Cry 4 map, removing any modern buildings and roads, and add some new people and textures and a bunch of animals.

PRODUCER: What about dialogue and characters? We’d still have to script all that out.

DEVELOPER: We could create our own language and then just tell the story through subtitles?

PRODUCER: Oh, okay, I love it! This is great. We can announce it at — Wait!

PRODUCER: I’m thinking…. What if, instead of making it DLC, we just turn it into the next game in the franchise? Far Cry Prehistoric. No. Far Cry Hunter. No, that’s not it. But you get where I’m going with this.

PRODUCER: Yes! And we can charge full price for it! We’ll rake in millions more than we would as DLC. How long would you need to make it a full release?

DEVELOPER: Uhhh… I guess maybe a year or so? We’d need to concept it out and-

PRODUCER: Perfect! I’ll tell the bosses what we’ve come up with.

DEVELOPER: But wait, won’t people be pissed that we’ve made such a dramatic change?

PRODUCER: What do you mean?

DEVELOPER: Well, I mean, is it even Far Cry if there’s no guns? Or strong characters? Or modern infrastructure?

PRODUCER: Who cares? Gamers are idiots. They’ll buy it for the title alone.

It’s a little reductive to brush Far Cry Primal off as merely DLC expanded into a full game, or a reskinned version of Far Cry 4, but unfortunately that’s exactly what you’ll be thinking while playing it. Coming just over a year after that fourth game, Primal drops players into 10,000 B.C., and in doing so diverges drastically from the previous two games’ tested formula. But the problem is that it’s also restrained by being a part of that same franchise: The Far Cry hallmarks of a strong antagonist, compelling narrative and bombastic gameplay are gone. In their place is a game that focuses on a more intimate, quieter, atmospheric experience. Far Cry Primal (

) is undoubtedly a good game — it’s just a pity that it’s a terrible Far Cry game.

Let’s start with its setting: the land of Oros, a, beautiful, fertile, mountainous region in Northern Europe. It’s undoubtedly Primal’s greatest strength. If it is indeed just a reskinning of Kyrat from Far Cry 4 (and similar waterways and roads would suggest that it is), it’s one hell of a redesign. Untouched by centuries — millennia, even — of human progress, Oros is raw, savage, unforgiving, but also gorgeous, bountiful and bursting with every facet of nature’s beauty. Giant trees, plant-rich grasslands, coursing rivers, giant mountains, rolling hills, natural bridges and snow-capped peaks dot its landscape. It’s teeming with wildlife, from deer to goats to wolves to saber-toothed tigers, this is a land where animals are king. Here, man is still stuck firmly in the Stone Age, making tools, establishing villages and mastering fire, but always at the mercy of whatever nature has to throw at him.

As Takkar, a hunter from the Wenja tribe, the player will navigate this world in a near-constant state of apprehension. What could be hiding behind that tall grass? What’s waiting for me in that tree? What was that sound? Where did those wolves run off to? Oros is a place just waiting to kill you, whether at the tooth or claw of an animal, the steep drop of a cliff, the icy water of a lake, or the spear of a member of an opposing tribe. The texture work, lighting and sound design combine to make Far Cry Primal a game where your heart rate rarely has time to sink to more placid levels — especially when night falls, and everything becomes ever more dangerous in the moonlight.

Gameplay, too, has its strengths. While it can be jarring at first going from assault rifles and grenades to a bow and arrow or stone club, the adjustment is relatively painless. If you’re willing to roleplay and accept that killing something was a lot harder in 10,000 B.C. than it is today, it’s much easier to make the transition. If you’ve only recently finished playing Far Cry 4, well, it’s going to be a bitch for the first couple of hours.

Both helping and hindering here is the level of similarity between the games. Hunting and crafting is more essential here than ever, with wood, rock, dust, plants, animal fats and skins and other collectibles being used to craft tools, weapons, ammo, heal your character and upgrade your tribe’s village. The crafting system is dragged straight over from past games, as is tool selection, but it brings some annoying quirks — you don’t craft arrows for your bow in the crafting menu, for instance, instead you make them in the weapon selection screen. This is a UI designed for guns and ammunition that’s been forced back into this setting — and it shows.

And that carries over to too many aspects of Primal. Instead of radio towers, which will unlock parts of the map, you’ll be taking over bonfires. Instead of going on drug-fuelled rampages, you’ll go on annoyingly long vision quests. Instead of a cleaner aesthetic to suit the simpler times, you’ll be constantly inundated with UI elements as you navigate through the world — something essential in a more modern setting, but completely out of place in Primal. Perhaps most egregious is Hunter Vision, which lets Takkar see enemies, animals and collectibles in the environment. It feels so out of place here that it’s almost laughable upon first use (in Far Cry 4, it’s a smart pair of binoculars that picks out targets). It makes much more sense once Takkar gains control of an owl, which can scout ahead for him and identify potential threats — an owl has heightened senses, a human does not.

Here, however, Primal claws back some points. Mastering the world’s various beasts is a delight. Players will be given an owl and a white wolf to start with, but they can add bears, lions, tigers, and even honey badgers to their repertoire. In battle — or while hunting — these animals can be called upon to attack and take down targets, a handy way of surprising a group of enemies. Sit back and snipe with the bow and arrow while a bear rampages in to tear them to shreds. It’s one of Primal’s highlights.

What definitely isn’t is the thin, uninteresting story. Whereas prior games could hardly be passed off as Pulitzer-worthy dramas, 3 and 4 both contained enigmatic, engrossing antagonists, who chided and goaded the player into caring about their quest to take them down. Pagan Min, for example, with his constant chattering over the radio as players progressed through the story, was invaluable in making Far Cry 4 such a fun game to play. Here, there isn’t that same sense of attachment. Sure, there’s a dedication to setting that’s impressive — Ubisoft drafted in linguists to create three distinct languages for the three tribes that would have been appropriate for the time — but Primal’s story is pretty boring. Takkar must take down the tribes that have been murdering the Wenja, in an effort to ensure his tribe is the dominant one in the region. Sure, there’s some morality at play here — if everyone is fighting to survive, who’s good and who’s evil? — but I cared little for the events I was playing through.

It also doesn’t help that content outside of the main story is paper thin. You’ll recognize a lot of the side quests from Far Cry 4, just reskinned for this ancient world. You’ll rescue kidnapped Wenja, interrupt supply routes for other tribes, take over areas and claim outposts. Hunting and crafting occupy significantly more time in this game, but outside of that it’s business as usual for the series.

And that’s really the core of Primal’s problem. It’s a Far Cry game, so it has to adhere to the precedent established by the successful third and fourth entries. The issue here is that, in this Stone Age land, those same gameplay archetypes just don’t work. What Ubisoft should have done is release Primal as just that: Primal. No Far Cry prefix. Without the heavy UI elements and me-too mission structures, Primal could have focused on its core strengths: hunting, gathering, surviving in the land of Oros. It’s there that players will find the most enjoyment in Primal, while quietly stalking their prey, or attempting to tame a beast, or planning an attack on a group of rival tribesmen.

Whatever Ubisoft’s motives with Far Cry Primal, it just doesn’t work. It’s far from a bad game — indeed, it has moments that approach sublime — but by burdening it with the expectations of the Far Cry franchise, it’s destroyed what could have been a fun experience.

Far Cry Primal is available on PC, PS4 and Xbox One. 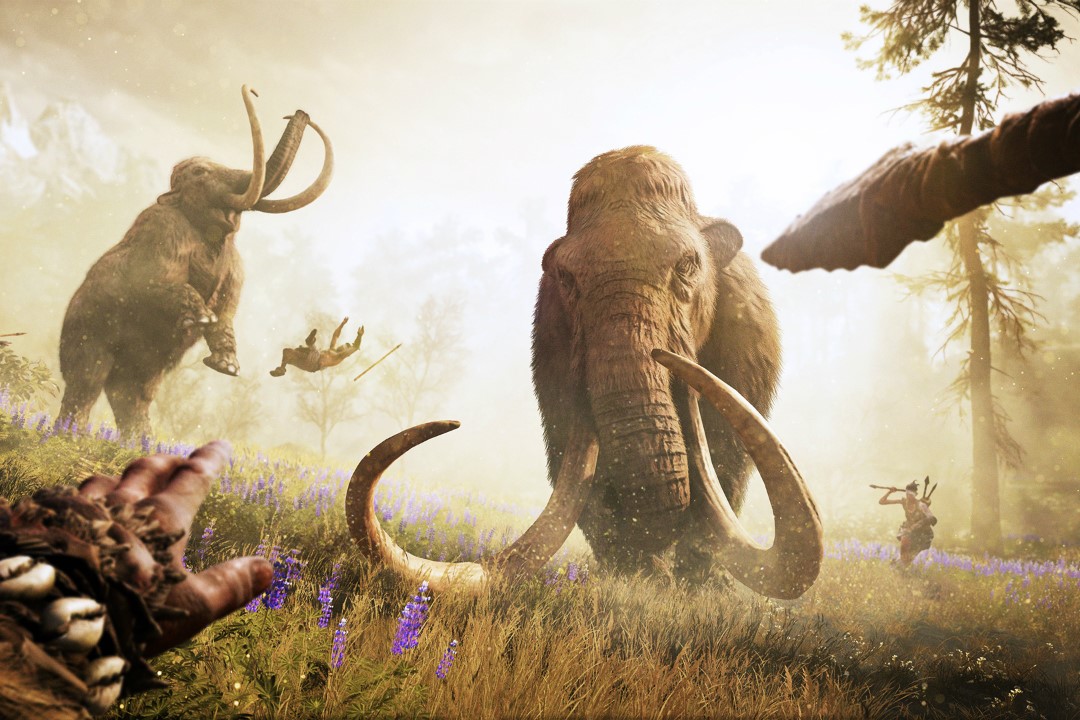