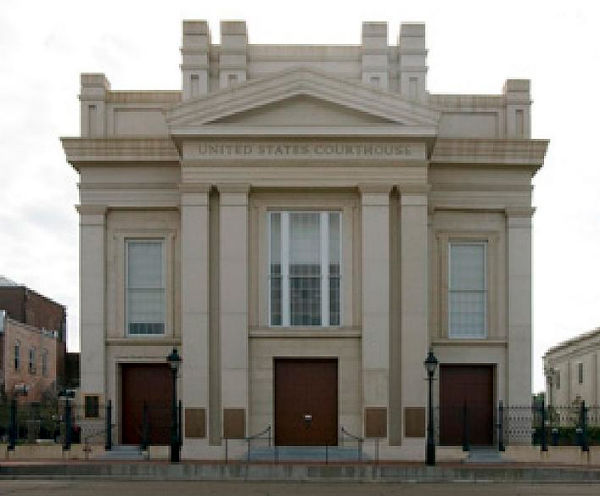 U.S. Courthouse in Natchez, Miss. for the U.S. District Court for the Southern District of Mississippi (Credit: General Services Administration, via Wikimedia Commons).

On Thursday evening, a federal judge in Mississippi has struck down the Magnolia State’s ban on same-sex adoption. Because U.S. District Judge for the Southern District of Mississippi Daniel Jordan III did not stay his ruling, it means that same-sex couples in the state now have a right to adopt, and that the state Department of Human Services is prevented from enforcing the ban.

In his ruling, Jordan explicitly said that Mississippi’s statutory ban on allowing same-sex couples to adopt — the last such law of its kind in the nation — “violates the Equal Protection Clause of the United States Constitution.”

Citing the Obergefell v. Hodges decision issued by the Supreme Court last year, which legalized same-sex marriage nationwide, Jordan noted in his ruling that the majority opinion in the marriage case “foreclosed litigation over laws interfering with the right to marry and ‘rights and responsibilities intertwined with marriage.'”

“It also seems highly unlikely that the same court that held a state cannot ban gay marriage because it would deny benefits — expressly including the right to adopt — would then conclude that married gay couples can be denied that very same benefit,” Jordan wrote. “Obergefell obviously reflects conflicting judicial philosophies. While an understanding of those positions is necessary for this ruling, it is not this Court’s place nor intent to criticize either approach. The majority of the United States Supreme Court dictates the law of the land, and lower courts are bound to follow it.”

Lawyers for the plaintiffs, which include four same-sex couples, as well as the Family Equality Council and the Campaign for Southern Equality ob behalf of other LGBT couples across the state, celebrated Jordan’s decision. Two of the plaintiff couples are hoping to adopt from Mississippi’s foster care system, and the other two are already raising children, but the non-biological parent isn’t recognized as a guardian by the state.

“We are obviously thrilled with today’s ruling, but our clients are beyond ecstatic,” said Roberta Kaplan, the lead attorney in the case. “And that is exactly as it should be. Two sets of our clients have waited many (almost 9 and 16) years to become legal parents to the children they have loved and cared for since birth.  We hope that it should finally be clear that discrimination against gay people simply because they are gay violates the Constitution in all 50 states, including Mississippi.”

“We are so overwhelmed with joy,” plaintiff Susan Hrostowski, who has been raising her son for 16 years with her wife, Kathryn Garner, said in a statement. “…For us, the feeling and the way we have operated as a family have never been impacted by this law. But to have this ruling and to be able to start the adoption proceedings tomorrow means everything to me. There is no greater joy on this planet than to have him as my son and for the world to understand, appreciate and affirm that he is my son. It means everything.”

According to data from the 2010 Census and the Williams Institute at the UCLA School of Law, as of 2014, an estimated 996 same-sex couples in Mississippi were raising 1,401 children under the age of 18, constituting about a third of all same-sex couples in the state.

“LGBT families live in every town across Mississippi and can finally have the rights and protections that every family should,” Rev. Jasmine Beach-Ferrara, the executive director of the Campaign for Southern Equality, said in a statement celebrating Jordan’s decision. “This ruling is a critical step forward in the journey toward full equality in every sphere of life for LGBT people in Mississippi.”

John Riley is the local news reporter for Metro Weekly. He can be reached at jriley@metroweekly.com
← Previous Story For one D.C. family, accepting their young transgender daughter was a non-issue
Next Story → Missouri state senator: Expanding gay rights hurt Illinois’ economy