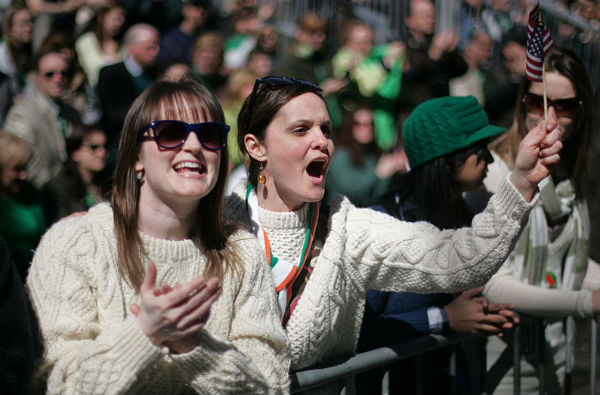 “I never thought I’d see the day when I could march up Fifth Avenue in the St. Patrick’s Day Parade with my husband. When we started in 1991, after getting arrested so many times for protesting the parade, wow, what a moment this is.”

—Brendan Fay, chairman of the Lavender and Green Alliance, a Queens-based LGBT rights group of Irish-Americans, speaking to The Washington Post. For years, parade organizers said gay people were allowed to participate, so long as they didn’t identify themselves as gay with signs, shirts or buttons.

The refusal to acknowledge and allow out marchers and LGBT groups to participate in the St. Patrick’s Day Parade became a rallying cry for LGBT activists, who protested their exclusion from the event for years. Last year, Mayor Bill de Blasio refused to march as long as the ban continued, and Guinness and Heineken withdrew their sponsorships. Under public pressure, organizers finally relented and “eased’ the longstanding ban by allowing an LGBT contingent from NBCUniversal to march, and said they’d add a second LGBT group in the future. This year, that honor went to the Lavender and Green Alliance.

Similar movements have occurred in other cities. In Boston, organizers lifted their own longstanding ban on gay marching contingents in 2015. The original ban was upheld as part of a 1995 Supreme Court case, Hurly v. Irish American GLIB Association, which found that parade organizers, in their role as private citizens, could not be compelled by the state to include groups with whom they did not wish to associate, and that such an exclusion was protected by the First Amendment. Beginning last year, organizers of Washington, D.C.’s St. Patrick’s Day Parade allowed a contingent from The DC Center for the LGBT Community to march, something the group did again in this year’s parade on Thursday afternoon.