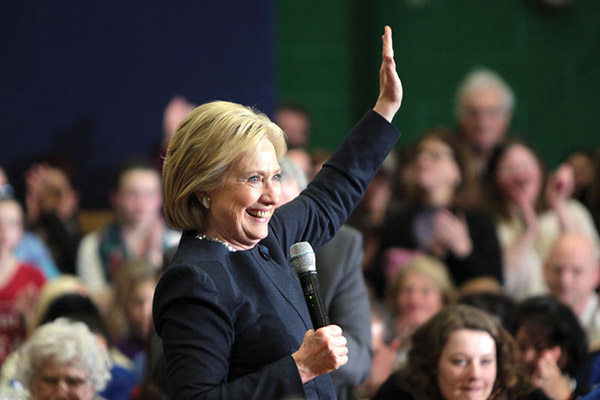 Democratic presidential candidate Hillary Clinton has issued an apology for comments she made praising former President Ronald Reagan and his wife Nancy Reagan’s legacy on AIDS at former the First Lady’s funeral on Friday.

Speaking to MSNBC during the televised broadcast of the funeral, Clinton said that the Reagans “started a national conversation” about the AIDS epidemic when “nobody would talk about it.”

“It may be hard for your viewers to remember how difficult it was for people to talk about HIV/AIDS back in the 1980s,” Clinton said. “…When before nobody would talk about it, nobody wanted to do anything about it, and that too is something that I really appreciate with her very effective, low key advocacy but it penetrated the public conscious and people began to say, ‘Hey, we have to do something about this too.'”

Clinton’s comments were shocking to many within and close to the LGBT community, as the Reagans are often blamed for ignoring or making light of the severity of the AIDS crisis. Last year, on World AIDS Day, Vanity Fair debuted a short documentary, When AIDS Was Funny that included audio of Reagan’s press secretary, Larry Speakes, laughing off a question from a journalist asking about the White House’s response to AIDS. And BuzzFeed’s Chris Geidner reported that Nancy Reagan even turned down a plea from her friend, actor Rock Hudson, who was suffering from the disease, to help get him transferred to another hospital that could better treat him.

Immediately, the former Secretary of State’s critics pounced on her comments, with the Huffington Post’s JamesMichael Nichols characterizing them as “polarizing, inaccurate — not to mention offensive.” Gawker’s Sam Biddle accused Clinton of “revisionism” on the history of the AIDS crisis, calling the comments “shocking, insulting and utterly inexplicable.” Prominent LGBT and AIDS activist Cleve Jones took to Facebook, writing: “Hillary Clinton is praising Ronald and Nancy Reagan for ‘starting a national conversation’ about HIV/AIDS. Utter bullshit. Disgusting. Really, just stop it.”

Even allies of the Democratic frontrunner criticized the comments, with Chad Griffin, the president of the Human Rights Campaign (HRC) — which has endorsed Clinton for president — took to Twitter, writing: “While I respect her advocacy on issues like stem cell & Parkinson’s research, Nancy Reagan was, sadly, no hero in the fight against HIV/AIDS.”

While I respect her advocacy on issues like stem cell & Parkinson's research, Nancy Reagan was, sadly, no hero in the fight against HIV/AIDS

Within hours, Clinton’s campaign issued an apology, as well as a statement elaborating on and clarifying her past record on HIV/AIDS. The campaign also took to Twitter, writing: “While the Reagans were strong advocates for stem cell research and finding a cure for Alzheimer’s disease, I misspoke about their record on HIV and AIDS. For that, I’m sorry.”

Hillary Clinton’s statement on her comments about the Reagans' record on HIV and AIDS: pic.twitter.com/RtIs0zpJfk