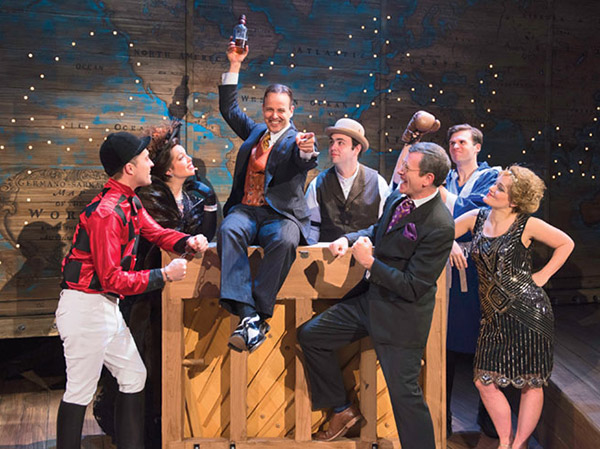 It hasn’t been an easy road for Road Show, the latest, hardly greatest work from Stephen Sondheim. Even now, 17 years after the show first came to life as Wise Guys and after multiple, extensive changes, the current Signature Theatre production will prove worth the journey only for die-hard Sondheim fans.

It’s hard to get into this jazzy/folk-y musical tale, also known to Washington audiences as Bounce from its one and only previous local run, as part of the Kennedy Center’s 2003 Sondheim Celebration. Road Show (

) is the embellished story of two real-life brothers who traveled the world in search of fame and fortune nearly a century ago — but ended up with only fleeting success and a whole lot of bad karma as a result of various scams, concocted by eldest brother Wilson Mizner (Noah Racey). Naturally, the more-honest Addison (Josh Lamon) had more success, and he becomes the chief protagonist here.

Addison is also gay, though that’s something you might not pick up on until the show’s best song, “The Best Thing That Ever Has Happened.” Addison sings this kiss-ending ballad with Hollis Bessemer (Matthew Schleigh), who, aside from a little initial flirting, we previously only know as Addison’s partner in business, not romance. That’s just one of several spots where John Weidman’s book feels underdeveloped, leaving us uninterested in the action. From the outset, we get a little dizzy hop-scotching around the world with the Mizner brothers in a span of just a few minutes. And so it goes: Road Show would rather keep pursuing adventure and possibility than slow down to explore love and relationships in the here and now.

Even director Gary Griffin’s strong cast — with most actors taking on several roles — seems at a loss here and there. Sherri L. Edelen, for example, is over-sentimental in her portrayal of Mama Mizner, as if to cover up the fact that the character doesn’t seem to really know her own sons. Lamon also plays up the sad-sack, spine-less schmuckiness of Addison, adding to the challenge of mustering much enthusiasm for the show.

Also not helping the cause is the low-key, small-budget way Signature has staged the one-act, intermission-less show. A few members of the ensemble pick up instruments every now and then, but Jacob Kidder is the only full-time musician utilized, playing piano right from the thrust stage. In their letter in the program, Signature’s Eric Schaeffer and Maggie Boland invite comparisons between Road Show and West Side Story, the last Sondheim show staged in its Max Theatre. No one going to see Road Show expects to see the kind of spectacle and showstopping stagecraft, complete with 17-piece orchestra, that went into putting on one of the greatest musicals ever made — which also became the largest in Signature’s history. Yet in light of that, you certainly can’t help but wish for more.

Doug Rule covers the arts, theater, music, food, nightlife and culture as contributing editor for Metro Weekly. Follow him on Twitter @ruleonwriting.
← Previous Story Domestic Disturbance: Othello (review)
Next Story → Olney and Round House team up for Angels in America