The Simpsons “The Burns Cage” (review): Smithers comes out

Smithers' big coming out story is a rushed, messy affair, but it treats his sexuality with welcome nonchalance

It’s been a long time since The Simpsons was anything close to being culturally relevant. The show’s long, miserable demise has come at the expense of a legacy that, at one time, found America’s most famous family the yardstick by which all other animated series — and even many sitcoms — were measured. Able to deftly balance heart, humor, satire and narrative, in its prime, The Simpsons was untouchable.

This is not a story about the jaundiced residents of Springfield returning to their former glory. Instead, Sunday night’s “The Burns Cage” (

) was a reminder that there are some in the writers’ room who still care about their characters, who’ve been forced to weather so much mediocrity over the years. Conceived by Rob LaZebnik, the episode finally deals with something long known to fans and townsfolk alike, but finally acknowledged by everyone: Waylon Smithers’ sexuality.

Smithers’ unrequited love for Mr. Burns has fueled numerous jokes over the years, many humorous, some bordering on homophobic (an earlier joke this season about Smithers climbing into the ass of a Burns’ statue was particularly tone-deaf). Through 27 seasons, Smithers has lived in purgatory, his sexuality and any love life referenced through euphemism and off-handed comments, all while he pines for his cold-hearted boss. No more. Waylon Smithers came out, folks, and in the gayest way possible: a musical number.

It’s one of the highlights of an otherwise imbalanced episode. As Mr. Burns once again ignores Smithers’ attempts to profess his love, the embattled assistant sings his way through the power plant. There are nuclear puns in abundance (“Can’t you see the fire/Burning in my core?” “Is there a half life for hope?/I know the answer is ‘Nope.'” “I’ve failed at my mission/No fusion, just fission.”), but the message is clear: Smithers’ love for Burns is starting to deeply scar him. It’s here that Homer, Lenny and Carl step in, determined to try and find him a man.

Of course, it’s for entirely selfish reasons: Smithers is so hurt that he’s taking it out on the men, forcing them to work more. The solution? Get him laid. It’s a human reaction, one free from any discussion of his sexuality — indeed, Smithers never actually says “I’m gay,” and a single joke reinforces that everyone already knew, while also poking fun at the show never directly stating it. “I know the answer,” says Lenny. “We have got to get that guy a woman. A woman who can find him a man.”

It’s a wonderful moment, dealing with Smithers’ sexuality as the non-issue we’d all like to think of it as being. It’s a shame, then, that what follows is a haphazard half hour of Smithers quitting his job, finding a boyfriend, and then ultimately reconciling with the fact that Mr. Burns is the only man he will ever truly love. A mixer at the Simpsons’ house pairs him with Julio, Hank Azaria’s heavily accented Cuban bartender. From here, there are glimmers of Simpsons humor of yore: Homer uses “Grinder” to find Smithers a man, an app Marge stumbled across while looking for pepper grinders. Smithers and Julio, after several dates, are shown picking up a license from a government official as two other men kiss nearby — they’re then seen happily fishing, fishing license in shot. When Smithers and Julio travel to Cuba, Julio tells Smithers he requires “100 percent commitment, okay?” A shirtless man walks past, drawing his eye. “Okay, well maybe not 100, but at least like 20.” The jokes, among numerous others, land because they’re working with the narrative, not just shoehorned into it — a style The Simpsons used to excel at, but which has been largely forgotten in recent years.

Unfortunately, the episode’s B-plot hurts the main story. A school production of Casablanca starring Lisa and new student Jack Deforest falls flat on several levels, only redeeming itself in one sight gag: a banner on opening night pokes fun at elementary school kids performing material as mature as Casablanca, advertising “Tomorrow Night: A.M. Kindergarten presents Equus.” The time spent on this side story could easily have been used to flesh out Smithers’ tale of woe, but really, like most episodes of The Simpsons these days, character development was jettisoned at the expense of cramming in more absurdist humor.

LaZebnik should have been more confident in Smithers’ story alone, with the Simpsons employed to help him experience life without Burns. The show has tackled homosexuality in a variety of ways, from the tour de force of “Homer’s Phobia,” with Homer facing his prejudices towards gay men, to “There’s Something About Marrying,” where Patti comes out and tries to marry her partner — only this time it’s Marge who has the problem. “The Burns Cage” sets itself up to be an episode about unrequited love, self realization and acceptance by one’s peers — all under the guise of sexuality — but what it ultimately offers is halfhearted at best.

The pace with which “The Burns Cage” throws Smithers through his new experiences is the episode’s undoing. From acknowledging that everyone is aware of his love for Burns, to exploring a relationship, to returning to the status quo, it’s almost comforting that his emotions are so roughly handled — the writers are showing the same disregard for Smithers as they do every other character on the show, forcing him through quickfire changes before tying a neat bow around everything, so the show’s canon remains intact the following week. If that doesn’t say that being gay is a non-issue, I don’t know what else does.

Ultimately, Smithers’ big coming out story — for better or worse — really isn’t that big of a deal. In a series like The Simpsons, where characters are frozen in time, forced to bend to the whims of an increasingly apathetic production team, it’s hardly surprising that the Burns/Smithers dynamic wasn’t drastically altered. Smithers stays with Mr. Burns at the episode’s end, with Burns giving Smithers his oft-delayed performance review. It is, appropriately, “Excellent.”

However, that Smithers was allowed the freedom to taste life outside of the Power Plant — and that viewers were invited along for the ride, however bumpy — was a rare moment of warmth in a show that nowadays resorts to punchlines over emotions. It was far from perfect, but for late-game The Simpsons, that’s seemingly good enough. As for Smithers, he summed up his personal torment perfectly, in a comment to a dejected Milhouse:

“What keeps you going is the thrill of the chase, the possibility that one day you might get what you want,” he says. “Even though the reality is, you probably never will.”

For fans of The Simpsons, still hoping for a return to the glory days of old, it’s a poignantly bittersweet moment. And then, because they just can’t help themselves, it’s trampled on by a joke about Moe prospecting for gold with a child.

The Simpsons airs Sundays at 8/7c on Fox.

The Simpsons: "The Burns Cage" 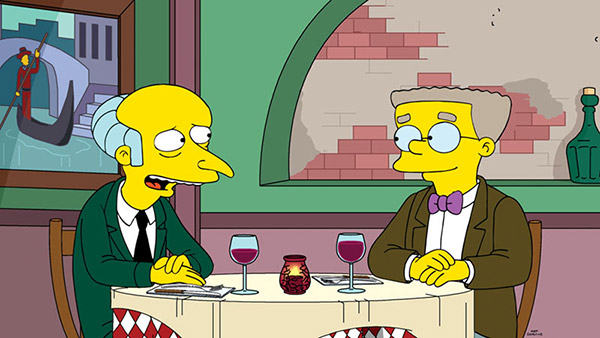