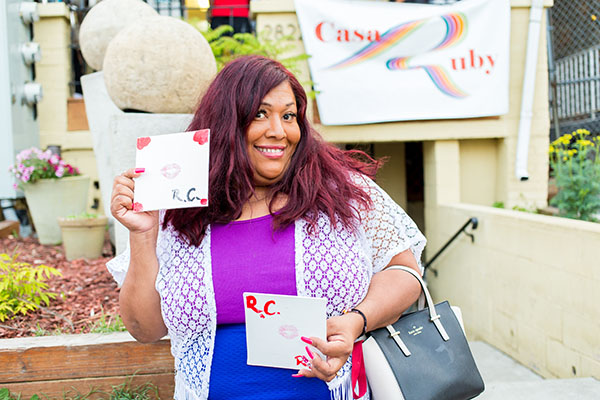 “Love has always been the medicine to address big, big, big issues,” says Ruby Corado. “I am a very simple person who wants to leave a tiny, little mark in this city by showing how much I love my community. Even with the limitations that I have every day, I want to show them that they are loved.”

The executive director of Casa Ruby, which offers support to D.C.’s homeless LGBT youth, is describing the artistic process behind her submission to a collaborative art installation sponsored by Marriott Rewards. The exhibit, “Love Travels,” will be unveiled during the Capital Pride festivities next month.

Corado’s submission is a simple design featuring a bright red lip print smacked into the center of a small canvas. “Kisses are an expression of love,” she says. “I’m not a painter. I wanted it to be very simple because that’s how I am.”

Marriott Rewards has enlisted young LGBT advocates from around the world to participate, including Jazz Jennings from TLC’s I am Jazz.  “Always love yourself for who you are,” Jennings wrote in an Instagram post. “Once you can do that, spread that love to many others across the world like rainbow flowers gliding in the universal wind.”

Always love yourself for who you are. Once you can do that, spread that love to many others across the world like rainbow flowers gliding in the universal wind. #FriendofMR Share your own expression with everyone using #LoveTravels and #MyPride

Well-known LGBT YouTubers Miles Jai, Shannon Beveridge, and Cammie Scott, as well as Pepe and Teo from Mexico and Trent Owers and Luke Shayler from London, all posted videos documenting the creative process for their subscribers.

“We really wanted to represent the diversity that was in the LGBT community,” says Marriott spokesperson Cherilyn Williams. “We really looked for a diverse mix of influencers that had a story to tell and that wanted to share it through an expression of art and love.”

The general public can contribute to the installation by posting paintings, doodles, photographs and handwritten expressions by using hashtags #LoveTravels and #MyPride on Instagram and Twitter.

“That’s what ‘Love Travels’ is about — providing a platform for people to tell their own stories and their own experiences,” Williams says. For each submission posted by Wednesday, May 25, the hotel chain will make a donation to Casa Ruby, which operates a community center and two shelters in D.C. for LGBT youth ages 18 through 24.

“Our homeless youth programs are underfunded and we have a waiting list of more than 100 people that are waiting to get in,” Corado says. A portion of the donations will go towards Casa Ruby’s HIV Fellowship Program, aimed at lowering HIV and sexually transmitted infections within the city’s transgender community. The remaining proceeds will go toward the organization’s homeless youth programs, including expenses that aren’t traditionally covered by grant funding.

“When you run housing programs for youth, you are assuming the role of a parent,” Corado says. “We take these kids and bring them into a system of care. It’s not just giving them a bed —  they need haircuts, they need underwear.” Providing for Casa Ruby’s residents in a holistic way is vital to Corado, as it helps create a welcoming home environment.

Accomplishing this requires financial help from the community, including corporations, which Corado says don’t often make LGBT philanthropy a priority. Marriott is keeping the amount of its donations and other details about the campaign “top secret” for the time being. “We have a couple of surprises in store for both the unveiling of the art installation and for the parade that will be announced just before Capital Pride,” teases Williams.

Says Corado: “I would like this campaign to be an opportunity to show corporate America that…there are still some people in our community that have yet to achieve queer liberation.”

To contribute your own artwork to the installation to benefit Casa Ruby, post a photo of a painting, doodle or hand-written expression using hashtags #LoveTravels and #MyPride on Instagram or Twitter by Wednesday, May 25.