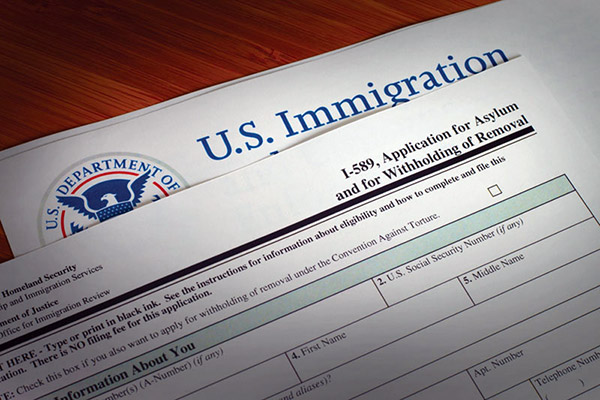 Michael Namelum has a bounty on his head if he ever returns to Azerbaijan.

The 34-year-old’s father and male relatives have sworn to kill him because he is gay and was once engaged to a man in the United States. And it’s not just an empty threat: when Namelum was just a child, the men killed an older cousin who was suspected of being gay.

His father has even targeted his mother and 16-year-old sister because of his sexual orientation.

“My father found out, and he targeted my mother for producing a gay child. And he blamed her, as if she knew what I was, and didn’t tell him. He tried to burn my mom’s hands. He literally dragged her to the kitchen, turned the stove on, and lit her hands on fire. And my sister came to help her, and that was how they escaped,” Namelum says. “They are hiding in terror because my father could find them at any time. In fact, as we’re talking right now, they might be getting killed.”

Namelum was blackmailed by a police officer who tried to extort money from him. That officer ended up raping and torturing him.

Namelum, a human rights activist, had twice been attacked while in Azerbaijan. Once, in the mid-2000s, he was blackmailed by a police officer who tried to extort money from him. That officer ended up raping and torturing him. In 2011, Namelum was attacked and gang-raped by three men for his activism on HIV/AIDS prevention among men who have sex with men (MSM) and on LGBT rights, including his involvement with a group that supported LGBT Americans abroad in Azerbaijan.

Namelum came to the United States and reunited with a former boyfriend — he had previously lived here for a year in 2006 — and the two began talking about getting married. Then, just weeks before their wedding, they broke up, leaving Namelum in the lurch.

At the time, Namelum was based in Dallas with his ex-fiance. He knew he couldn’t return home because of the threats against him, so he decided to apply for asylum. But first, he had to get out of Texas — he had been warned that he would be more likely to have his application rejected coming from an anti-gay state. So he moved cross-country to live with friends in Washington, D.C., sleeping on their couch for about a year.

Upon moving to D.C., Namelum began forming ties with fellow asylum seekers and torture survivors. He became involved with both Center Global, a program of The DC Center, and the Torture Abolition and Survivors Support Coalition (TASSC), and applied for asylum. Because government regulations prohibit asylum seekers from even applying to obtain a work permit for six months after they initially apply, he was unable to work, having to rely on charity and limited support from groups like Center Global in the form of gift cards for food and prepaid Metro cards for transportation.

With the help of a pro bono lawyer, Lindsey Wilkes, Namelum was able to expedite his case, having it heard within six months. He calls it a “miracle,” particularly considering that most asylum seekers can wait years before even being granted a hearing to see if they will be granted asylum.

That’s currently the situation facing Michael Ivanov, a 31-year-old asylum seeker from the Crimea region of Ukraine. Ivanov, who was a scientist in his home country, is currently in school because he has not yet been scheduled for a hearing regarding his application, due to a massive backlog in processing applications from those seeking asylum.

Ivanov’s mistreatment began as a child, when he was bullied, harassed and picked on by his classmates and neighbors because they suspected he was gay. When he was 14 or 15, a classmate even threw a lit firework into his backpack, but was never punished for it.

Five men wearing surgical masks descended upon Ivanov and began beating him until he lost consciousness. He was left lying in a puddle of blood until a passerby called an ambulance.

Ivanov, who contracted HIV from an untested blood transfusion in 2010, was also denied medical treatment because of his HIV status. This denial of treatment continued even after a 2012 incident that left him seriously injured and hospitalized. During that incident, Ivanov was contacted by a man named Andrey, who he began corresponding with for about a month. They agreed to meet at a local park one evening, but it turned out to be a set-up: five men wearing surgical masks descended upon Ivanov and began beating him until he lost consciousness. He was left lying in a puddle of blood until a passerby called an ambulance. Ivanov received such poor treatment at the hands of hospital staff that they discharged him even though he still had broken bones, severe lacerations, and damage to his right eye.

Unfortunately, such mistreatment of LGBT people is not uncommon in many regions throughout the world. The recent news of two LGBT rights activists who were hacked to death with machetes in Bangladesh highlights the severity of the threats that many LGBT people face abroad, particularly in countries where homosexuality is criminalized. For many asylum seekers, fleeing to another country, such as the United States, becomes the only viable option if they wish to remain alive.

Daniel Tendai, another asylum seeker, says his involvement with the LGBT group Gays and Lesbians of Zimbabwe (GALZ) placed him on the government’s radar as a potential threat to its anti-LGBT stances. But it was an interview that he did while at a U.S. conference, in which he suggested that the United States do more to help the LGBT community in Zimbabwe, that became the turning point.

“I got messages from people telling me that it had gone viral,” says Tendai. “And, to me, that meant that something could get really bad if I tried to go back home. They would be waiting for me.”

Tendai has since been living with a friend in Rockville, Md. while he waits for a pending hearing date to review his application for asylum. He is receiving help from a pro bono lawyer, but realizes it may take years before he is officially granted asylum.

“I want to live a normal life, where I am free and my rights are protected, and I can be who I am.”

“I would want to return to Zimbabwe, if and only if the system changed. But I cannot go to Zimbabwe right now because of the very strict laws [against homosexuality] there,” Tendai says. “I will not be free and I do not know what would happen to me…. I want to live a normal life, where I am free and my rights are protected, and I can be who I am.”

Despite the obstacles that LGBT asylum seekers face upon arriving in the United States, there can be positive outcomes for some. Namelum has since obtained a steady job with an international research institute that focuses on women’s rights, along with private health insurance. He has continued speaking out on behalf of LGBT rights, lobbying Congress on issues from the importance of making the position of Special Envoy for the Human Rights of LGBTI Persons permanent to speaking up for immigrant transgender women who have been detained in male detention centers. He has even met with House Minority Leader Nancy Pelosi (D-Calif.) on two separate occasions.

“I am an activist. You guys created a monster,” he says. “I make speeches, I give interviews. Being an activist gives me strength, it gives me power. It helps me to heal…. I feel empowered to stand up for people who are currently being tortured and killed, in Russia, Azerbaijan, Turkey, Iran, Uganda, all over Africa.”

Due to how quickly he was able to obtain a hearing on his asylum status, Namelum is just two months shy of being eligible to apply for a green card, which will make him, in legal terms, a lawful permanent resident of the United States.

“America has become home for a lot of LGBT people who came here, and America saved their lives by providing them shelter and a new home,” says Namelum. “D.C. is my home. This is my country now. And I’m proud to be here, to be alive, and thankful.”

John Riley is the local news reporter for Metro Weekly. He can be reached at jriley@metroweekly.com
← Previous Story Saudi Cleric: Homosexuals shouldn’t be punished
Next Story → Italy will finally recognize same-sex unions — with some concessions