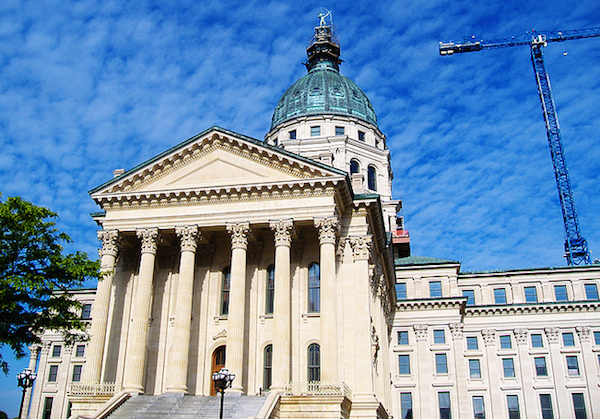 A pair of resolutions working their way through two red-state legislatures this week seek to condemn the Obama administration’s guidance on how schools should treat transgender students and deal with issues of gender identity. The resolutions, which have been introduced in Oklahoma and Kansas, are another example of a political backlash in conservative states against the administration’s interpretation that sex discrimination laws apply to transgender people and others who do not conform to “traditional” gender roles or stereotypes.

Earlier this week, Oklahoma attempted to pass a “bathroom bill” that would have required schools to — without building any new facilities — provide a religious accommodation that could not include offering the use of single-occupancy restrooms to students who have religious objections to homosexuality or feel uncomfortable about the prospect of having to share facilities with transgender students. That bill later failed to emerge from committee in the House of Representatives after some Republicans objected to meddling in individual school districts’ own already-enacted solutions or accommodations for transgender students.

However, Republicans appear united and all too happy to get on board with a resolution supporting an ongoing lawsuit by Oklahoma’s attorney general, in conjunction with representatives from at least 10 other states, against the proposed guidance issued jointly by the U.S. Department of Education and the U.S. Department of Justice earlier this month. It also suggests that Oklahoma schools may choose to opt out of the guidance issued by the Obama administration on how schools should deal with transgender-related issues. The resolution has already passed the House, is expected to be taken up and passed by the Senate.  Meanwhile, in Kansas, lawmakers are considering approving a similar resolution that condemns the guidance and specifically rejects the Obama administration’s stated position that Title IX’s prohibitions on sex discrimination apply equally to transgender students.

The American Civil Liberties Union, which is leading the fight on behalf of multiple transgender students in various states, blasted the decision by state lawmakers to attempt to undermine the federal government by passing laws or resolutions that target transgender people for discrimination.

“It’s astonishing that lawmakers haven’t yet realized that peddling these discriminatory measures is harmful for everyone — their constituents, business and the economy, and their own political careers,” ACLU Staff Attorney Chase Strangio said in a statement. “It is time for those who claim to represent us to stop making transgender people the punching bag. They should instead use this opportunity to learn about who transgender people are  — our daughter, our neighbors, our doctors and teachers and waiters — and how we can learn from our differences.”

Laid Out in Color: DC Public Schools hopes its guidance on transgender students will serve as model policy for other school districts