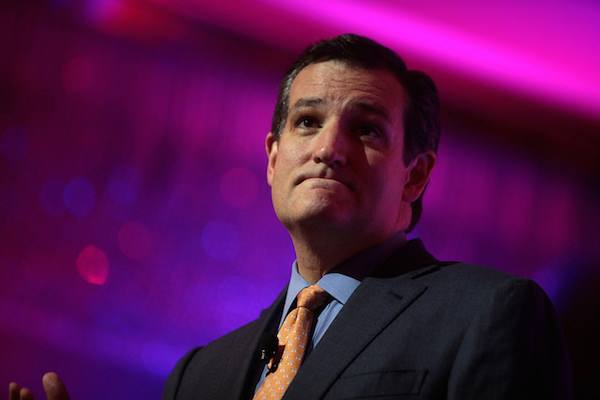 Last year, when Ted Cruz first announced his candidacy for the presidency, we compiled a list of 10 anti-gay statements the Senator from Texas had made. Reflecting a pre-marriage equality America, the extremely conservative Cruz had repeatedly railed against same-sex marriage, homosexuality, gay pride parades, and assaults on “religious freedom.”

Now, as Cruz’s campaign bites the dust and America is spared the possibility of one of the most conservative presidents in recent history, we decided to revisit Cruz’s rhetoric to see just how much it’s changed since he started vying for votes. As it transpires, the bigotry is still very much intact, except there’s been a shift — as with the religious right as a whole — from focusing on those pesky gays and their right to marry, to those pesky transgender people and their need to urinate.

“ISIS is executing homosexuals — you want to talk about gay rights?“

(May 2015) — Early in the campaign, Cruz attempted to deflect from constant questions about his personal homophobia. Cruz believes homosexuality is a choice, that marriage equality is an “assault” on faith, and that business owners should be able to refuse to serve LGBT people. To try and deflect from those facts, he reminded the media that ISIS was killing gay people. Cruz wasn’t throwing gay people from buildings, so thought he should be immune to questions about gay rights.

“I would encourage everyone here to be lifting up in prayer the court that they not engage in an act of naked and lawless judicial activism, tearing down the marriage laws adopted pursuant to the Constitution.”

(June 2015) — In this awkwardly worded speech, Cruz instructed audience members at the Faith and Freedom Coalition to pray for the Supreme Court to reject marriage equality. Hindsight would suggest that the plan didn’t go so well — the court ruled in favor of same-sex marriage a week later.

“The last 24 hours at the United States Supreme Court were among the darkest hours of our nation.”

(June 2015) — Cruz, during a campaign stop in Iowa. Needless to say, he wasn’t particularly happy when the court ruled in favor of marriage equality.

“I have been proud to fight and stand for religious liberty…for my entire career, and I will be proud to continue to do so as President of the United States.”

(August 2015) — Sorry, Ted, you’ll have to “stand for religious liberty” as a senator, as you’re not going to be president. Widely considered a conservative metaphor for legalizing discrimination against the LGBT community, supposed attempts to protect “religious liberty” have resulted in the wave of recent religious freedom laws in Republican-led states. Unsurprisingly, Cruz is a big fan.

“Look, these guys are so nutty that the federal government is going after school districts, trying to force them to let boys shower with little girls.”

(November 2015) — As the debate over marriage equality subsided, Cruz joined other conservative figures in switching focus to another vulnerable issue: transgender bathroom access. After the Justice Department supported a transgender student’s fight to use a bathroom consistent with his gender identity, Cruz used a conservative radio show to claim that “the federal government is coming in saying that boys, with all the god-given equipment of boys, can be in the shower room with junior high girls —  this is lunacy!” No, Ted. Your argument is, however.

“It’s also been reported that he was registered as an independent and a woman and a transgendered leftist activist.”

(November 2015) — In the wake of a shooting at a Planned Parenthood in Colorado that left three people dead, Cruz attacked the media and the political Left for daring to suggest that the shooter, Robert Lewis Dear, was part of the anti-abortion movement. Unfortunately, Cruz’s bizarre, transphobic statement was untrue — Dear was a deeply conservative, deeply troubled Christian who is widely believed to have targeted Planned Parenthood because abortion services are offered there.

“It was illegitimate, it was lawless, it was utterly contrary to the Constitution and…we should fight to defend marriage on every front.”

(December 2015) — Six months after marriage equality was ruled upon by the Supreme Court, Cruz was still beating a dead horse and claiming that it could be overthrown. In a conference call with E.W. Jackson — notorious for calling gay people “perverted,” “degenerate,” and “frankly very sick people” — Cruz promised his presidency would not “enforce this lawless decision that is a usurpation of the authority of we the people in this country.” By that time, however, a majority of people supported marriage equality. Awkward.

“He’s more interested in promoting homosexuality in the military than he is in defeating our enemy.”

(December 2015) — In that same conference call, Cruz also attacked President Obama and the end of Don’t Ask, Don’t Tell, claiming it had lowered military morale. He then claimed that the military is “now focused on trying to promote transgendered soldiers,” decrying it as “some left-wing social experiment.” The Pentagon is widely expected to revoke a ban on transgender servicemembers this year.

“Men should not be going to the bathroom with little girls.”

(April 2016) — If 2014 was all about DADT, and 2015 was the year of marriage equality, 2016 is shaping up to be the year of trans people trying to urinate in peace, while Republicans make it needlessly difficult. During a town hall with NBC, Cruz seized on prevailing rhetoric among conservative Republicans that women and girls are somehow at risk of trans women using public restrooms. Cruz believes men are able to “go alone into a bathroom with my daughters,” despite there being no evidence of a trans person ever attacking a woman or child in a restroom. A recently passed law in North Carolina forced trans people to use a restroom or changing facility that corresponded with their birth gender — unsurprisingly, Cruz thought the draconian measure was “perfectly reasonable.”

“If Donald Trump dresses up like Hillary Clinton, he still can’t go to the girl’s bathroom.”

(April 2016) — After Donald Trump surprised everyone by supporting the right of trans people to use the bathroom of their choice — he told Today Caitlyn Jenner could use whichever restroom she liked in Trump Tower — Cruz went on the attack. In an advert, he regurgitated several tropes used by conservatives, including: “Should a grown man, pretending to be a woman, be allowed to use the women’s restroom? The same restroom used by your daughter? Your wife? Donald Trump thinks so.” In one of several last-ditch attempts to garner votes, Cruz latched onto the issue of transgender bathroom usage to scare conservative voters into choosing him over Trump. Clearly, it failed.