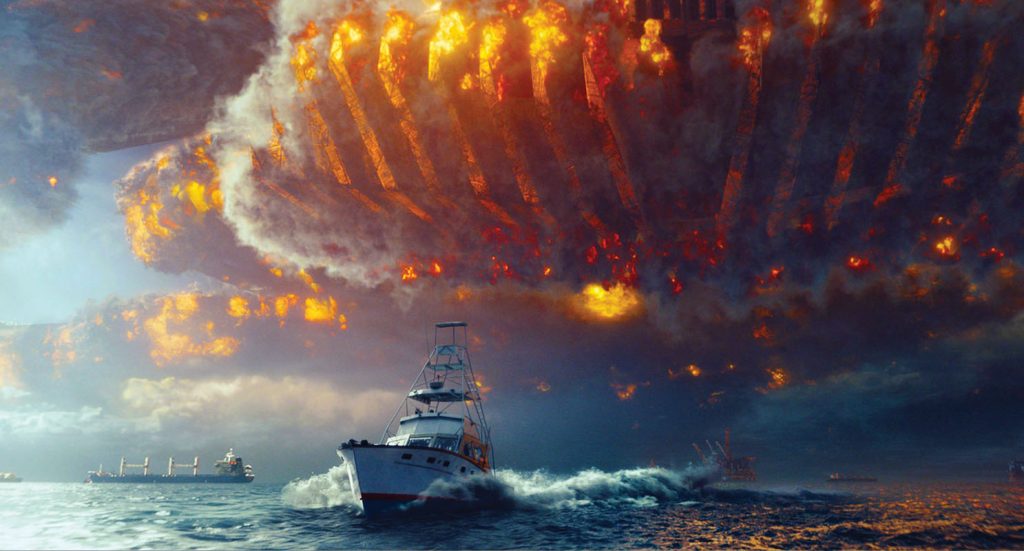 The aliens return, this time with a 3,000-mile-wide spacecraft that plants itself coast-to-coast across the Atlantic, felling London in the process (talk about a grand Brexit), in Independence Day: Resurgence (

By going absurdly gargantuan, Emmerich limits what he can do in terms of destruction. Dark brown clouds pretty much fill the screen, turning it to a mass of murky muck. Meanwhile the implausibilities of the narrative pile upon one another until the film sinks under the force of its own idiocy, culminating in an ending — SPOILER ALERT! — that denies us what we paid good money for: the visceral pleasure of watching a 3,000 mile wide spaceship’s apocalyptic destruction. Instead, it just gracefully waves a white flag and flies away, no doubt to prepare for a return twenty years hence in Independence Day: Regurgitation, where stars Jeff Goldblum and Liam Hemsworth will fight the aliens with walkers and Efferdent.

The movie is a cavalcade of cheap, cluttered, badly-executed effects, and features some of the worst 3D moments in the history of ever; at times the actors look as though they’re performing in front of vintage postcards. With no Will Smith to provide lightness of being, we’re instead saddled with the leaden Hemsworth, whose idea of a compelling performance is to dislocate his jaw and yell as loudly as possible for as long as possible. One fears for his lungs. If not his career.

We’re also stuck with an idiosyncratic Goldblum, a crusty Judd Hirsch and a manic Brent Spiner (as Emmerich’s — gasp! — token homosexual), all of whom feel like they’re here for a hefty paycheck to help maintain the lifestyles to which they’ve become accustomed, thanks to Apartments.com, Taxi, and Star Trek: The Prior Generation. Cuddly newcomer Travis Trope plays Hemsworth’s fawning pet bae. The goo-goo eyes they make at one another cause one to wonder if they shouldn’t just get a room — there are sure to be plenty of vacancies amid all the rubble.

With all this talk about keeping people out of the country, maybe it’s time we looked at shipping this destruction-minded German back to his homeland.