Should the LGBT community arm its members, or ally itself with organizations pushing for greater gun restrictions? 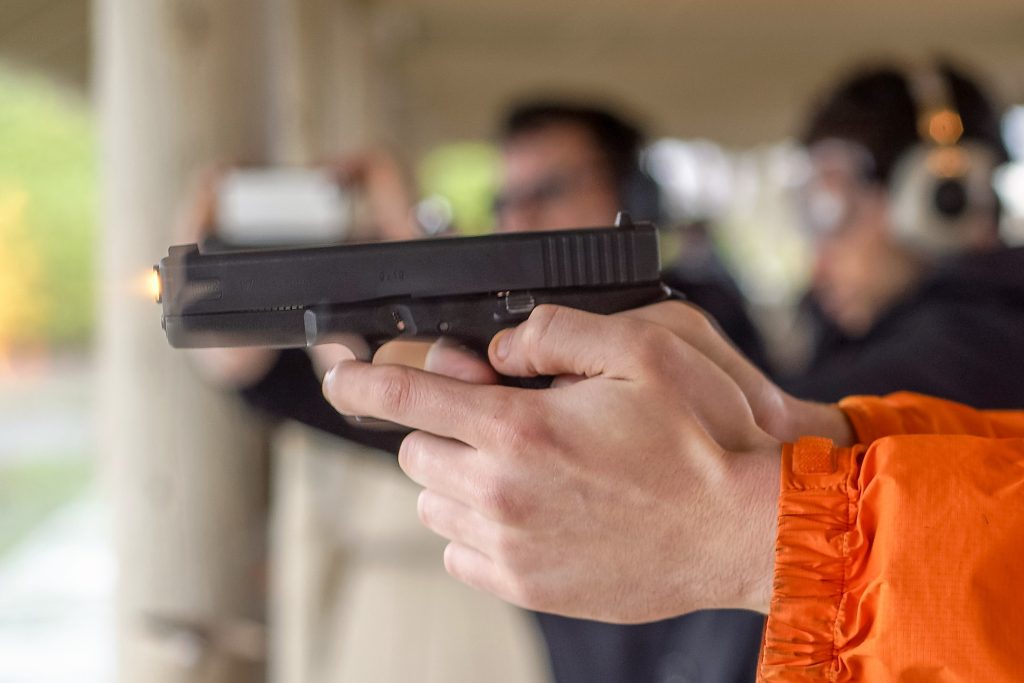 On the evening of October 10, 2012, Wayne McNeil sat on his front porch in Mobile, Ala., listening to music at the end of a long, hard day. As midnight neared, he stood up to go indoors. A sudden noise — a firecracker? — caused him to spin around. He saw two young men standing in the street, one brandishing a gun. McNeil desperately tried to get into his house. Instead, he stumbled and collapsed on the stoop, having been shot twice through his chest.

“One of the men held his gun in my face and asked if I liked it,” says McNeil. “And I said, ‘No.'” When McNeil held his arm up to defend himself, he was shot a third time at point-blank range, through the armpit. “The bullet lodged in my back,” he says. “Somehow, miraculously, I’m still alive.”

After life-saving surgery, McNeil gave no thought to becoming an advocate for greater restrictions on firearms. But the May 2014 shooting that killed six and injured 14 others near the University of California, Santa Barbara convinced him he needed to take some type of action.

Turning to the Internet, McNeil found an organization called Everytown for Gun Safety. He wrote to them about his own ordeal and was invited to become part of the group’s Survivor Network, which connects people who have survived violent crimes and helps them become public advocates for sensible gun restrictions. The Survivor Network also provides a support system for victims, which was activated as soon as news broke of the mass shooting that killed 49 people and injured 53 others at a gay nightclub in Orlando, Fla., during the early hours of June 12.

“After people started to emerge from the shock of what we were seeing, everybody started reaching out to each other,” he says. “I personally don’t know how I would have made it through Sunday without having people who truly understand what it feels like to see that news and to know what bullets are like, or to know what it’s like to lose a loved one.”

Cable news broadcast wall-to-wall coverage of the shootings, the focus largely placed on gunman Omar Mateen’s stated allegiance to ISIS and the anti-LGBT sentiments that purportedly fueled his rage. The focus quickly shifted to the availability of weapons designed to quickly kill large amounts of people. How was Mateen able to obtain a gun, despite having previously been placed on an FBI terrorist watch list? The fires for debate were fully fueled.

The Human Rights Campaign immediately endorsed several gun control measures, including limiting access to assault-style rifles, expanding background checks, and preventing people with a history of domestic abuse from purchasing guns. On Monday, the Senate heard four gun-related measures, including two supported by Democrats. One would have expanded background checks for all licensed and private gun sales. The other would prevent people on government watch lists from accessing guns, and deny the sale of a gun to anyone who might seem likely to engage in terrorist activities. All four measures failed, casualties of partisanship (and NRA donor dollars).

Supporters of the Second Amendment reject the idea that restricting firearm use is the right course of action in the wake of serious gun-related tragedies, instead preferring to arm themselves. Following the Orlando attack, the Pink Pistols, an LGBT group that seeks to educate and train LGBT people in firearm use for self-protection, saw a significant boost in interest. The total number of chapters increased to 40 and membership on the group’s public Facebook page surged.

“A gun was used, so it’s got to be the gun’s fault,” says Gwendolyn Patton, First Speaker of the Pink Pistols. “But that doesn’t address the issue that it wasn’t a gun that did this. A person did this using a gun. It sounds like a difference about a distinction, but it’s not. It’s very important, because the attitude that ‘the gun did it’ is largely projection. And we can’t afford to be engaging in emotional projection when we’re dealing with such a critical issue.”

Patton, who lives in the suburbs of Philadelphia, says the Pink Pistols don’t necessarily object to background checks, as long as the data is not retained and used to create a national registry. Such registries, she points out, have resulted in firearm confiscation in New York, Washington, and post-Katrina New Orleans. She notes that a background check is only good as the data put into it, emphasizing the need for up-to-date, accurate information. A person who mistakenly ends up on a restricted list must be able to petition to have themselves removed, she asserts.

In the wake of Orlando, Patton has suggested lifting prohibitions like those in Florida that prevent patrons from taking their guns into clubs and bars, which she nicknames “victim disarmament zones.” She’s also floated the idea of “designated defenders,” people permitted to carry firearms into nightspots and use them in the event of an attack.

“Just as we have designated drivers that stay sober to get their friends home safely in their car, we should also have designated defenders, people who are allowed to carry a firearm in a bar but stay sober so there’s no issue of impairment,” she says. “And that way, if something horrible happens, and you either get an attacker who evades the [doormen of the] bar or nightclub or restaurant that serves alcohol, and decides to shoot the place up, someone in there has a chance of helping and stopping this person, and reducing the number of injured and dead.”

“They were not in the wrong place at the wrong time. They were in the right place in a nation with the wrong gun laws.”

“It’s asinine,” says Shannon Watts. “The idea that we’re going to arm people who are dancing and drinking in a nightclub and expect them to respond to a mass shooter with a semi-automatic rifle, and not shoot and kill people, is ridiculous.”

Watts, a Denver-based mother of five, is the founder of Moms Demand Action for Gun Sense in America. She utterly rejects arguments put forth by groups like the Pink Pistols, calling them “NRA talking points.”

“Look at the states in America that have passed stronger gun laws,” she says. “Those states have seen their rates of domestic homicide by gun, police shootings by civilians with guns, mass shootings, gun trafficking — all of these gun crimes — cut in half. But when you look at a state like Missouri, that had strong gun laws and reversed them, you see a spike in gun homicides and suicides.”

Watts argues that the NRA is “not about saving lives at all” — they just want to sell more guns. The key to saving lives is stronger gun regulations.

“It’s just like climate change. You can decide you don’t want to believe it, but credible scientists agree, on climate change and on gun violence. The best way to prevent gun violence is to have stronger national gun laws,” she says. She also points out that federal laws are much more likely to effect change than a “state-by-state patchwork.”

“The Chicago area has strong gun laws,” Watts points out. “But guess what? You can go 20 minutes over the border into Indiana, you can be a criminal, and still buy a truckload of guns at a gun show, take them back over the border, and sell them out of the back of your truck to kids. It happens every day.”

As the mother of a gay teenager, the Orlando shootings “hit close to home” for Watts. Arguments by pro-gun groups that the death toll could have been lower had people been armed is victim-blaming, Watts says.

“It’s almost like saying these people at the Orlando nightclub were responsible for their own murders. They’re not,” she says. “They were not in the wrong place at the wrong time. They were in the right place in a nation with the wrong gun laws.”

With each shooting, affected communities — whether LGBT people after Orlando, women’s groups after a Planned Parenthood shooting in November, or African-Americans and religious groups after a shooting at a church in Charleston, S.C. — have begun to foster relationships with gun violence prevention organizations like Everytown and Moms Demand Action. In turn, those organizations have borrowed a page from the LGBT movement’s push for marriage equality, choosing to work on a state-by-state basis to reform gun laws, rather than looking to the U.S. Congress for solutions.

“Much like marriage equality, it’s not going to happen unless people use their voices and their votes,” Watts says. She also notes that the political landscape for those who support tougher firearm restrictions is more favorable than it was before President Obama took office.

“Eight years ago, no Democrats wanted to talk about this issue. Flash forward to 2016, guns was the wedge issue among Democrats, when they were fighting to be the strongest on the issue,” she says. “And now, going into the general election, Secretary Clinton is calling this the most important issue to vote on in 2016.”

It’s an issue that, for Watts, supplants all others.

“I personally have a hard time focusing on the economy, and healthcare, and education, if I don’t know my 15-year-old is going to make it home from school.”

In the wake of the Orlando massacre, should we have stronger gun control?

On Sunday, June 12, there were 42 other reported shootings across the United States. Eighteen people were killed and 41 injured. Five children died.

John Riley is the local news reporter for Metro Weekly. He can be reached at jriley@metroweekly.com
← Previous Story Anti-gay pastor will have to relocate his church after praising murder of Orlando victims
Next Story → Orlando: Much has happened in the two weeks since the shootings