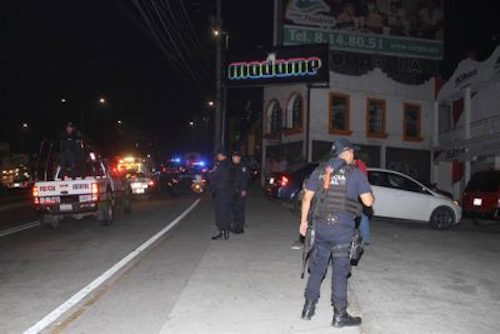 On May 22, three gunmen reportedly walked into La Madame, a gay club in Xalpa, Veracruz, and opened fire on almost 200 people inside. At least five people have died, though some reports suggest seven, and even as high as 15.

“All I remember is hearing gun shots, people started to fall down,” one of the victims told local media. “I threw myself on the floor and crawled inside the bathroom, after a few minutes I went out and saw all these people in a pool of blood, it was a nightmare.”

Veracruz State Ministry of Public Security reported finding shells belonging to an AK-47 and an AR-15 rifle — a similar gun to that which was used by Omar Mateen to kill 49 LGBT people at Pulse nightclub in Orlando.

Witnesses apparently reported a fight in the bar prior to the shooting, while the secretary of public security claimed that the shooting had been drug-related. GayNZ.com, one of the first English-language news sites to report the story, claim that the shooting was downplayed by both local media and authorities. That could suggest why the attack is only now coming to light in the wake of the Orlando shootings.

“It disturbs me greatly that this story is not being picked up by the English-language media around the world, and the gay media especially,” said co-publisher of GayNZ.com, Jay Bennie. “The Mexican Government and media have downplayed this tragic event. No Eiffel Towers are being lit up for our Mexican LGBTI brothers and sisters shot to death in a mass shooting, no flowers are being laid outside Mexican embassies, no candlelight vigils anywhere.”