President Obama: Orlando was terrorism, but also “an attack on the LGBT community”

"We can't wipe away hatred and evil from every heart in the world," Obama said. "But we can stop some tragedies." 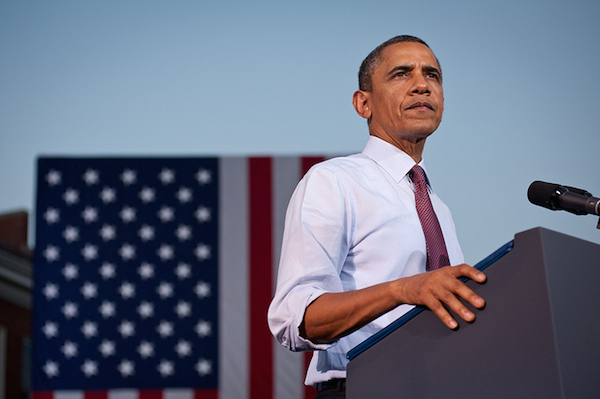 “Today, once again, as has been true too many times before, I held and hugged grieving family members and parents and they asked, ‘Why does keep happening?’ And they pleaded that we do more to stop the carnage.”

—President Barack Obama, speaking in Orlando after meeting with families of the victims of Sunday’s mass shooting, CNN reports. He called their grief “beyond description,” saying that the community had been “shaken by an evil and hateful act.”

“Today, we are reminded of what is good,” Obama said, standing in front of a memorial to the victims. “That there is compassion and empathy and decency and most of all, there is love.”

But the president also reminded reporters of lax gun legislation that had allowed Omar Mateen to buy an assault rifle and handgun, despite being investigated twice by the FBI.

“Our politics have conspired to make it as easy as possible for a terrorist or even just a disturbed individual to buy extraordinarily powerful weapons, and they can do so legally,” Obama said.

He told reporters that it would take “more than just our military” to prevent such atrocities happening again, saying “we’re going to have to take different kinds of steps to prevent something like this from happening.

“We can’t wipe away hatred and evil from every heart in the world,” he continued. “But we can stop some tragedies. We can save some lives.”

The president also called the attack “an act of terrorism but also an act of hate – this was an attack on the LGBT community,” NPR reports.

“Hatred toward people because of sexual orientation, regardless of where it comes from, is a betrayal of what’s best in us,” he added.