“I’m obsessed with amusement parks,” says Robert. “I’m obsessed. That’s my life.” Although the 31-year-old Baltimore native isn’t shy about picking local favorites — he loves Six Flags America, Hershey Park and King’s Dominion — he has a list of standards a park should abide by. “Busch Gardens has amazing roller coasters,” he says, “but they don’t have a lot. It’s a lot of money to get in and they don’t have a lot to offer, because I don’t like shows, I don’t like all that mumbo jumbo. I’m there for the rides. A lot of coaster enthusiasts get mad at me because I’m more about the quantity in the park over the quality of the park.

He’s currently looking for work in the hotel field, but would relish a chance to one day work in upper management at a theme park. “I’ve been all over the country and through Canada on rides in amusement parks,” he says. “I know how they should function and how they should work. I’m weird, I don’t criticize a park for the way it looks unless it’s dirty. When I went to Six Flags Magic Mountain, it was just dirty everywhere. When I went to La Ronde in Montreal, it was just disgusting. Some people complain about how some parks don’t have enough shade, and stuff. I’m like, ‘Well it’s fucking summer, what do you expect?'”

What’s on your nightstand?
My alarm clock, a noise machine and a lamp.

What’s in your nightstand drawer?
Old memorabilia, because I keep everything. Things like letters, postcards, a card from my mom. And, of course, condoms and lube.

Are you a night owl or an early riser?
I am an all-the-time person. It boggles my boyfriend’s mind how I’m always up.

What’s the last thing you bought?
I treated myself to two pairs of running shoes from Sports Authority because they’re going out of business.

If you could have any superpower what would it be.
The power to heal all illnesses so people don’t have to suffer anymore. Cancer and HIV are the biggest things I would want to take away because they’re two of the biggest incurable diseases. Everyone could be happy and not have to lose anyone.

What did you last binge watch?
Friends, because they don’t have Will and Grace on NetFlix.

What was the last movie you saw?
Finding Dory. It was not as good as the first one.

Who was your first celebrity crush?
Jonathan Taylor Thomas from Home Improvement. His hair was beautiful.

Name three musical artists you are currently listening to.
Willam, from Drag Race, love her. Taylor Swift, amazing. Katy Perry, because her music to me is so relatable.

What are your three favorite night spots?
Definitely Town, because the drag show is amazing. There’s a place in Baltimore called Max’s, which is in Fell’s Point. It’s a straight bar, but that’s pretty cool. There’s also a bar in Baltimore called Mixers that’s about as big as a table. It’s a hole in the wall where everyone knows everyone. It’s fun.

What’s your drink of choice?
Any kind of cider. I’m not big on hard alcohol and I don’t like beer, so I’ve chosen cider as my go-to drink.

Pick three people living or dead that you would like to have cider with?
Walt Disney, because I’m obsessed with Disney World. Ellen DeGeneres, because I think she is hilarious without being vulgar. And the CEO of Six Flags, so I could get a job there.

What’s your pet peeve?
Judging someone before you know them.

What’s your favorite food?
Crab — I’m from Baltimore. I don’t like to pick them, I only like to eat them. Just give me a crab cake.

Get Robert’s Wraparound Coverboy Mug! 50% Off for a limited time. Click here.

What kind of animal would you be if you could be any animal?
An otter, because that’s what I relate to in the gay world, as I am quite hairy.

What’s you biggest turn off.
Being shaved.

Describe your dream guy.
Someone a little taller than me. I’m not a chaser but I like thick guys. Body hair. And just treats me well, in a loving way. Someone that would do things I want to do, even if they didn’t want to do them, because it makes me happy.

What’s the most unusual place you’ve had sex?
A public campground shower.

What’s the most memorable pick up line that you’ve heard?
I’ve had a guy say something along the lines of “Do you want to see my Maserati?” I just looked at him like, “No,” and walked away.

What was your best date ever?
Probably my current boyfriend. We went to Texas Roadhouse and sat there for three hours talking. He didn’t look at this watch to see what time it was. Neither of us wanted to leave at the end. It just flowed, it just worked.

What was your worst date ever?
I was dating this guy when I moved back to Baltimore. He wasn’t ready for me to meet his roommate, so he had us sit in his car in the parking lot of his apartment complex for three hours. We just sat there and talked. It was winter, it was cold. I was like, “I’m ready to go.”

What’s your dream vacation?
DisneySea in Tokyo. The backup would be to go to some third world country and volunteer to help kids.

Star Trek or Star Wars?
Neither.

Salt or pepper?
Neither. I don’t use condiments on things.

Cedar Point or any other amusement park in the world?
If it’s Disney, then Disney.

What’s your greatest fear?
Not being happy.

If your home was burning what’s the first thing you’d grab while leaving it?
My safe. It’s small. It’s got my social security card, my passport and all that.

Does size really matter?
No. I don’t like big penises. I think they’re weird-looking and tacky. Everyone talks about it. I’m like, that doesn’t make you who you are, that doesn’t make you a good person. As long as they know what they’re doing, that’s all that matters to me. If I take their pants off and it’s huge, I’m like “No, not going back here.”

What would you like to be remembered for?
How good of a person I am, how caring I am, and how I put everyone before me.

What do you like best about your life?
I like that I’m alive in this time right now. This time that we’re having all this craziness with terrorism and bombings. But on the flip side, all the progressiveness with the LGBT community. How we can get married now and we can legally adopt a child in any state. That’s huge.

What do you like least about your life?
That I don’t try enough, I don’t do enough. I always say, well I’m going to do that one day, and I don’t because I’m too scared, I’m too introverted.

Would you rather live longer or be wealthier?
Live longer. Money doesn’t buy happiness. I would rather live a steady life getting by than have a million dollars in the bank all the time and have friends that only want to be my friends because I have money or people that want to date me because I have money. I’d rather someone want to be my friend and date me because of who I am as a person.

Who’s your idol?
My mom, because of everything she’s been through in her life. She still puts on a positive, happy face and tries to provide for her children, even though we’re 31, 27 and 28. Still bends over backwards for us. Even though all the things that she’s been through her life, she’s still here and happy.

Finally, what’s your philosophy of life?
Do what is going to bring you the greatest happiness and don’t care what people think. Especially in the LGBT community, we’re so judgmental of each other. It needs to stop. It’s just too much. 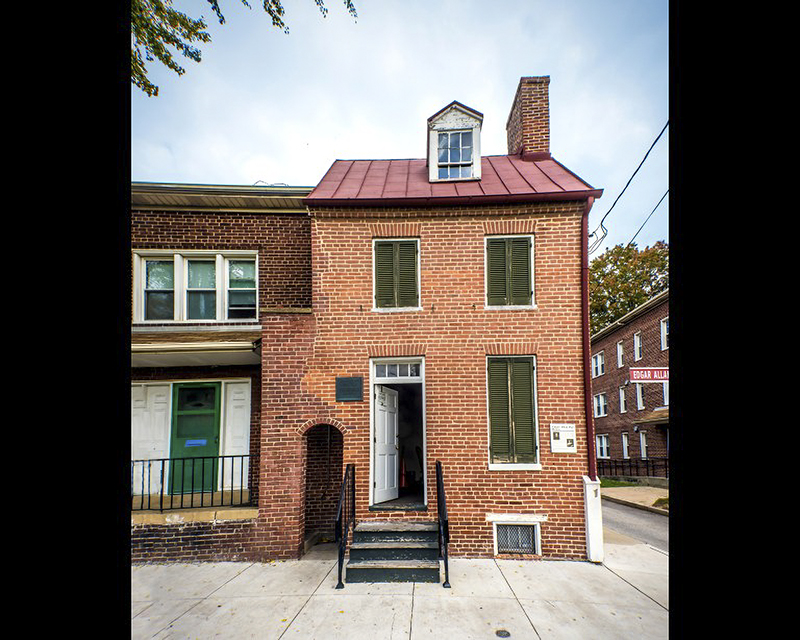 Actors, artists, scholars, merchants, and fans of Edgar Allan Poe will converge on Baltimore the first weekend in October to celebrate the legacy of the famed American writer in commemoration of the 172nd anniversary of his death. Organized by Poe Baltimore and the Poe House and Museum, this year's 4th Annual International Edgar Allan Poe Festival can be enjoyed virtually as well as in person.

The weekend offers a free, daytime lineup of events in Poe Park on the grounds of the house and museum dedicated to the pioneering author of the macabre, with a few supplemental offerings off-site requiring ticket purchase. The latter includes a week-long "Poe Film & Fashion Exhibit," which explores the mysteries surrounding his death as well as the fashion and costumes from recent film and TV programs about his life and works, such as Netflix's Altered Carbon and the forthcoming movie 3 Days Rising starring Peter Greene, Ice-T, and Mickey Rourke. Also offsite is the festival's official Black Cat Ball on Saturday, Oct. 2, a "Hollywood Gothic" masquerade and costume party at the elegant 1840s Plaza, followed by an After Party at Poe's Magic Theatre at the Holiday Inn Baltimore Downtown.