“The article was not intended to do harm or degrade members of the LGBT community, but intent doesn’t matter, impact does.”

–The Daily Beast, in a note from the editors on their website, apologizing for an article — “The Other Olympic Sport In Rio: Swiping.” — that appeared this week and promptly sent the internet into an uproar.

In the article, journalist Nico Hines used Grindr, Tinder and other apps to see what athletes were online and looking for sex in the Athletes Village in Rio. Hines, who is straight, messaged various athletes (predominantly male and gay). He then included their information — including participating sport and home nation — in his article. Information that would have easily identified them to anyone on their team.

Below is an excerpt from the article, with identifying information removed by Attitude:

The [height], [weight] athlete from [nationality], who sent his address, had a Rio 2016 duvet cover as his main picture. His profile read “I’m looking for sex” in both English and [language]. He asked for “a sex foto” but I’m a bit of a prude like that, so I sent a selfie from the fencing earlier this week.

Naturally, this led to fears that athletes from countries where being gay is still illegal — or, at the very least, heavily frowned upon — would be outed and thus at risk of violence or discrimination (or worse).

In addition, the editors also went through three different headlines: 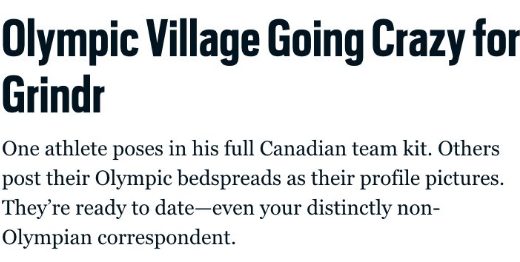 After outcry from readers, Daily Beast amended the article with a lengthy editor’s note, apologizing for publishing the identifying information. However, they have now taken the “unprecedented but necessary step” of deleting the article entirely.

Below is the note, in full, posted on their website:

The Daily Beast does not do this lightly. As shared in our editor’s note earlier today, we initially thought swift removal of any identifying characteristics and better clarification of our intent was the adequate way to address this. Our initial reaction was that the entire removal of the piece was not necessary. We were wrong. We’re sorry. And we apologize to the athletes who may have been inadvertently compromised by our story.

Today we did not uphold a deep set of The Daily Beast’s values. These values—which include standing up to bullies and bigots, and specifically being a proudly, steadfastly supportive voice for LGBT people all over the world—are core to our commitment to journalism and to our commitment to serving our readers.

As a newsroom, we succeed together and we fail together, and this was a failure on The Daily Beast as a whole, not a single individual. The article was not intended to do harm or degrade members of the LGBT community, but intent doesn’t matter, impact does. Our hope is that removing an article that is in conflict with both our values and what we aspire to as journalists will demonstrate how seriously we take our error.

We were wrong. We will do better.

But criticism of Daily Beast and Hines’ reporting will likely continue, after readers, athletes and professional organizations blasted the story.

The Society of Professional Journalists, a body representing journalists in America, said: “Such a story has no place in a modern media organisation,” and urged Daily Beast to apologize to the athletes involved.

Amini Fonua, a Tongan swimmer, said the website “ought to be ashamed.”

As an out gay athlete from a country that is still very homophobic, @thedailybeast ought to be ashamed #deplorable https://t.co/qzS9rDFJwx

No straight person will ever know the pain of revealing your truth, to take that away is just… I can’t. It literally brings me to tears 😭😭

It is still illegal to be gay in Tonga, and while I’m strong enough to be me in front of the world, not everybody else is. Respect that.

And there was plenty of outrage from other Twitter users:

.@dailybeast allowed a white straight man to abuse his influence and violates the right of #LGBT athlete. Journalism at its lowest.

So…@dailybeast is trash. @NicoHines is trash.
Whomever Hines’ editor is is trash.

You don’t endanger lives for clicks.

Did The Daily Beast go too far with their story, or is the internet overreacting to the potential threat it posed? Let us know your thoughts in the comments.