Angels in America: Exclusive portraits of Round House and Olney’s landmark production

Eighteen months ago, Ryan Rilette and Jason Loewith had lunch at Kantutas, a Bolivian restaurant in Wheaton. Both were the newest artistic directors at two of Montgomery County’s most prominent theater companies — Rilette with Bethesda’s Round House, Loewith with Olney — and were looking to expand their audience base, trying, as Loewith puts it, to “program aspirationally to the audiences that we wanted, not necessarily the audiences we had.” They had worked together years before at the National New Play Network and were friends, comfortable with sharing ideas, goals, dreams for their respective companies.

They wanted to collaborate.

“What if we did a play together? Is there a way we can do a play? What would be the big difficult play that we would want to do together that would be something that we couldn’t do on our own?”

Both said, simultaneously, “Angels in America.” 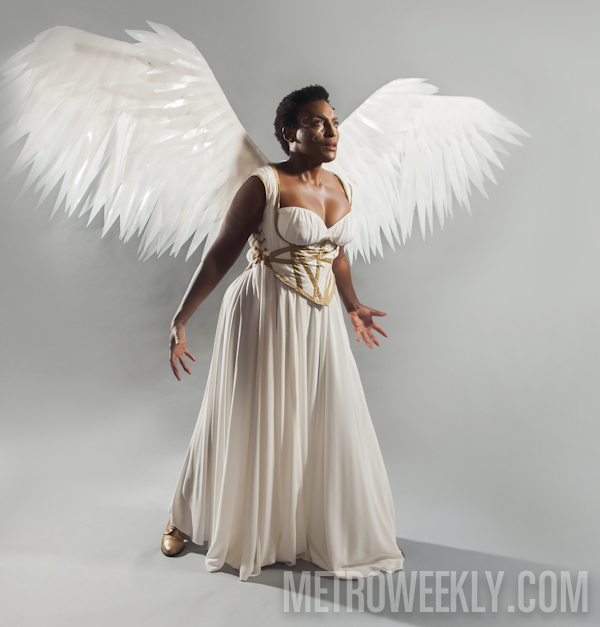 The Angel, Angels In America at Roundhouse — Photo: Todd Franson

And with that, Loewith and Rilette set Round House and Olney on a path to create a no holds barred production of Tony Kushner’s majestic, sprawling, two-part dramatic upheaval about the onset of AIDS, gay life in the ’80s, and the politics of shame, silence, bigotry and corruption.

At first, the directors thought they might stage Part 1: Millennium Approaches at Round House and Part 2: Perestroika at Olney. But the idea proved unfeasible. “Trying to use the same cast and the same designers at two different theatres just wasn’t going to work,” says Rilette, during a break from rehearsing Perestroika, which opens this weekend (Millennium has been playing for a month). Round House was chosen as the spot for Angels to land, with an agreement that the following season, the theaters would work on an equally ambitious, as yet unnamed project, at Olney. Loewith undertook directing duties for Millennium, and Rilette helms part two. 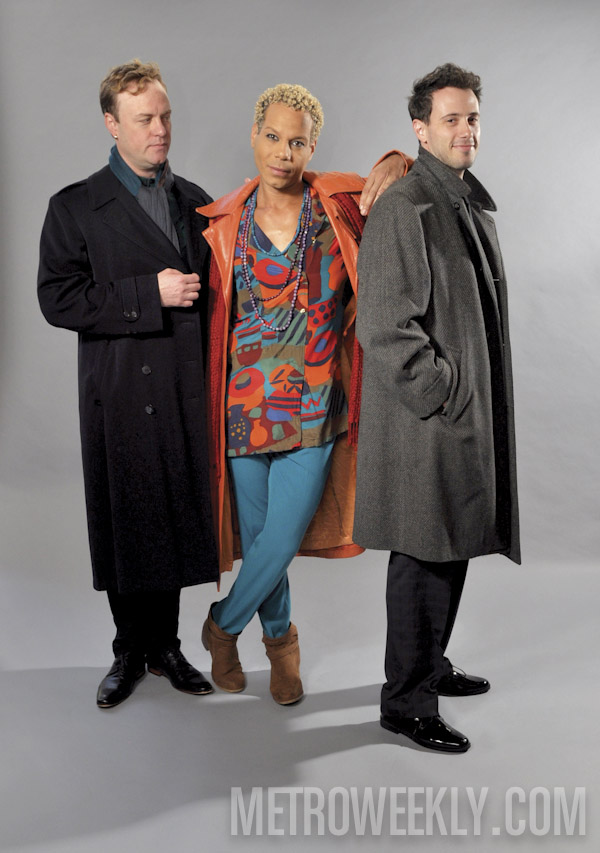 Prior, Belize and Louis, Angels In America at Roundhouse — Photo: Todd Franson

“That decision happened quite easily,” says Loewith. “I tend to be very drawn to strong narrative as a director, and Ryan is drawn to things that scare the shit out of him. That very easily meant that, ‘Oh, I’ll take part one, and he’ll take part two.’ It wasn’t even a conversation.

“Part one is really just one long descent until the angel arrives and says, ‘Let’s go,'” Loewith explains. “Everything moves to that moment. Her arrival throws the world into disarray. Perestroika is very purposely much more sprawling, much more theatrical. The dreams and hallucinations that begin to tear the fabric of reality in Millennium rip it wide open in Perestroika and seem to take over. The cosmology that Kushner created about who this angel is, what her job is, and why she’s come to Prior, gets explained. The entire second act is pretty much Prior’s retelling to Belize of what his meeting with the angel was, and how bizarre and crazy it all was. It’s very different in structure and extremely intense.” 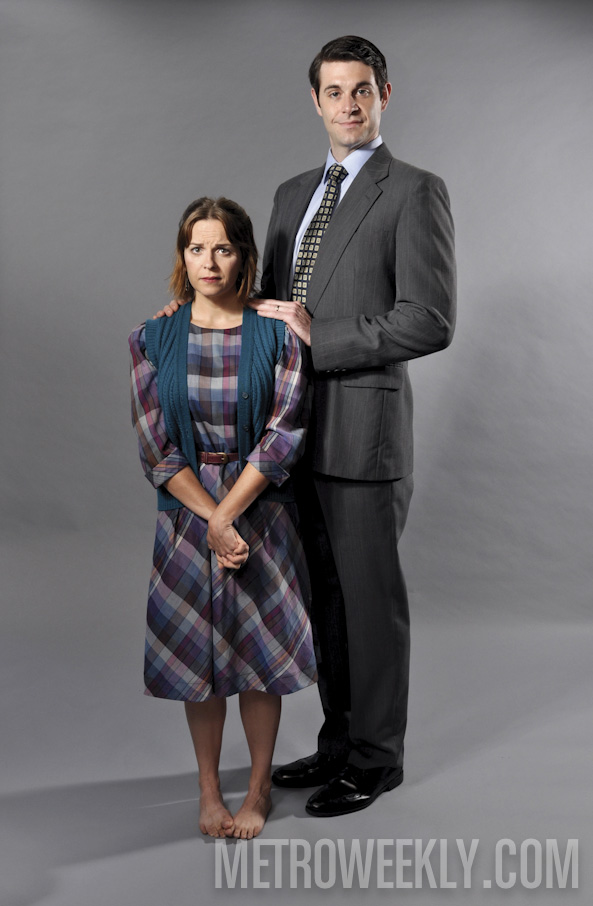 “Wait until you see Perestroika,” says Rilette. “I’ve produced over a hundred plays at this point in my career, and I’ve never seen anything like what we’re doing with this.”

Pooling resources helped them achieve the “Broadway quality epicness that the play asks for,” Rilette says. “How could you possibly do that on a normal regional theater budget?” Judging from Millennium Approaches, they’ve more than achieved their goal, with a handsome, expansive setting by James Kronzer, lush, evocative lighting by York Kennedy, and chilling, subtly unnerving projections by Clint Allen. “The first time he put the projections up, everybody in the theater — and I mean all these people who do this all day long, every day — went, ‘What the hell is going on?'” says Rilette. “I said, ‘I hope nobody shows up to this show tripping, because they’re going to really have a bad trip if they come into this.'” 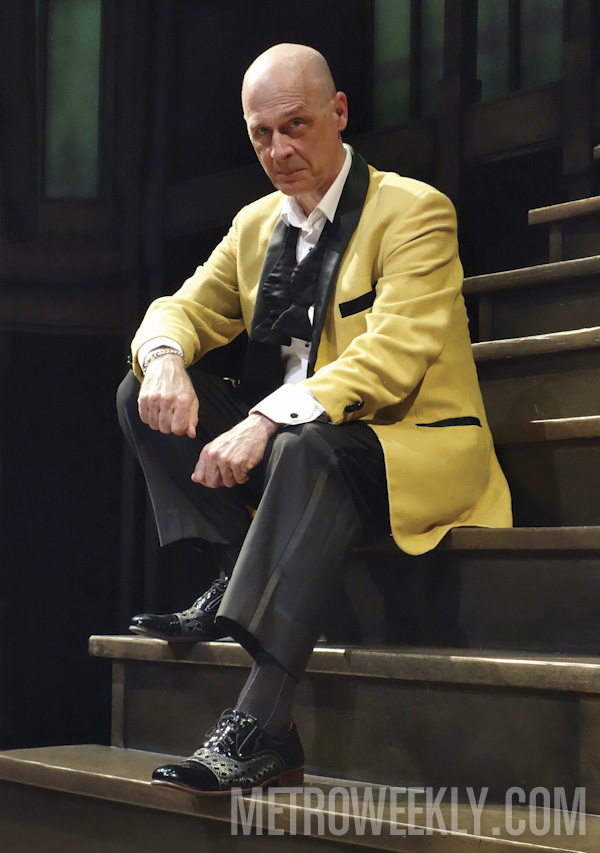 It is, ultimately, the cast who provide the soul of any dramatic production, and Loewith and Rilette have assembled one of the strongest in recent history. Many are familiar to regular theatergoers as the best in the business, including Tom Story, who all but steamrolls one’s emotions in Millennium with a funny, gripping, heartbreaking portrayal of Prior Walter, a man afflicted by a strange new “gay disease” that, as the evening progresses, covers his body in horrific, purple, cancerous lesions. Jon Hudson Odom brings the perfect amount of snap, sarcasm and charm to the scene-stealing role of Belize, Mitchell Hébert is a vicious, self-serving Roy Cohn, and as Louis and Joe, Thomas Keegan and Jonathan Bock play out their own personal torments in craven, selfish ways, inevitably confronting demons that, in Perestroika, turn their worlds inside out. Sarah Marshall deploys a disarmingly impish but fully malevolent gaze and stops the show as the ghost of Ethel Rosenberg, and Kimberly Gilbert brings full-throttle anguish to Harper, a Mormon woman whose shaken beliefs lead her down a well of madness. Finally, there is The Angel. We only get a glimpse of the elegant Dawn Ursula, suspended high above the stage, in Millennium, her expression filled with anger and grave portent, but there’s more to come in Perestroika. Much more.

“We’re really lucky we got kind of the dream cast,” says Rilette. “This is one of those projects that’s on everybody’s bucket list. Everybody wants to have a shot at it at some point, and we were able to find the ideal people to play these roles.” 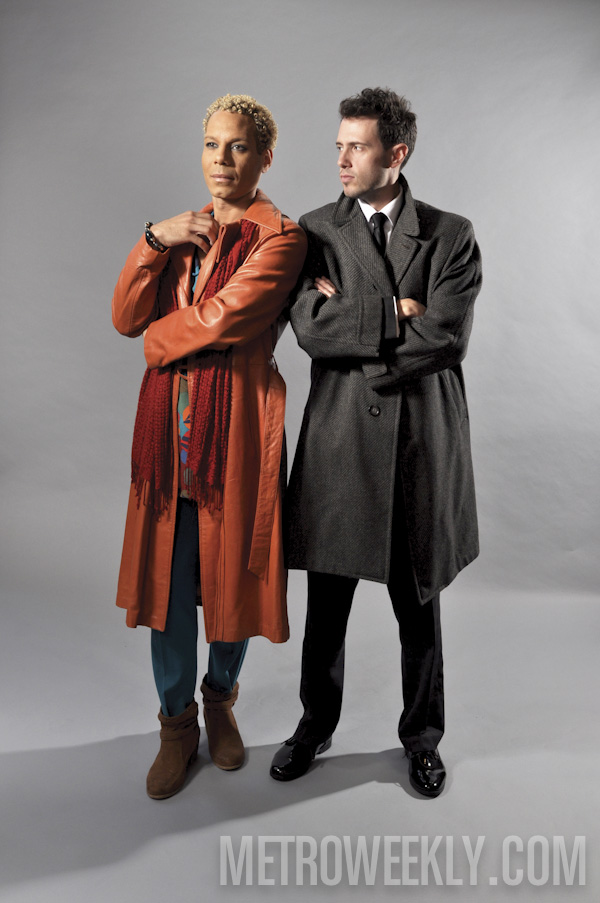 For those who might dismiss Angels in America as an out-of-date AIDS play, Loewith and Rilette offer thoughtful insights.

“I like to think that The Normal Heart is the greatest AIDS play ever written,” says Loewith. “I like to think that Angels in America is one of the greatest American plays ever written. Kushner calls it a gay fantasia on national themes, and that’s why it is extremely relevant now. As somebody who came of age as a gay man during the AIDS crisis, I’m extremely familiar with the history and the terror and the sense of AIDS as a death sentence. Our young assistant director was like, ‘Oh, yeah, my group of friends think of AIDS as just any other STD. You just go to the doctor and get the drug.’ Which is just shocking to hear for anybody who lived through it. 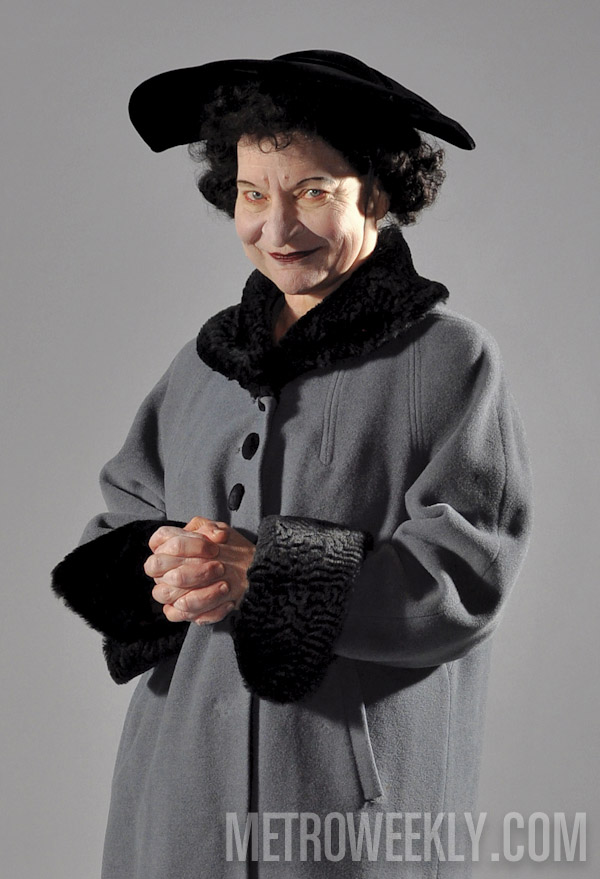 “The AIDS crisis — and this play as a marker in the AIDS crisis — heralded an incredible civil rights movement that has culminated in the Supreme Court making gay marriage the law of the land. [But] the play insistently talks about race relations, and why that civil rights struggle has not moved forward at nearly the same pace or with the same success. The parts of the play that resonate most to me are the conversations that Belize has with Louis, one in Millennium, and one in Perestroika, about race relations in America. They’re stunning in their prescience, and they take everybody to task.”

“I think Tony Kushner is our greatest living political playwright, and Angels in America is the best play ever written about American political life,” adds Rilette. “The beautiful thing about Angels is that, yes it is a play about a very specific time and about a very rough time in American life, a time where hundreds of thousands of gay men were infected with HIV, tens of thousands had already died of AIDS, and yet the president had not even yet said the word AIDS. You had the [White House] press room making fun of reporters who were trying to ask questions about it. It’s a horrible period in American history. 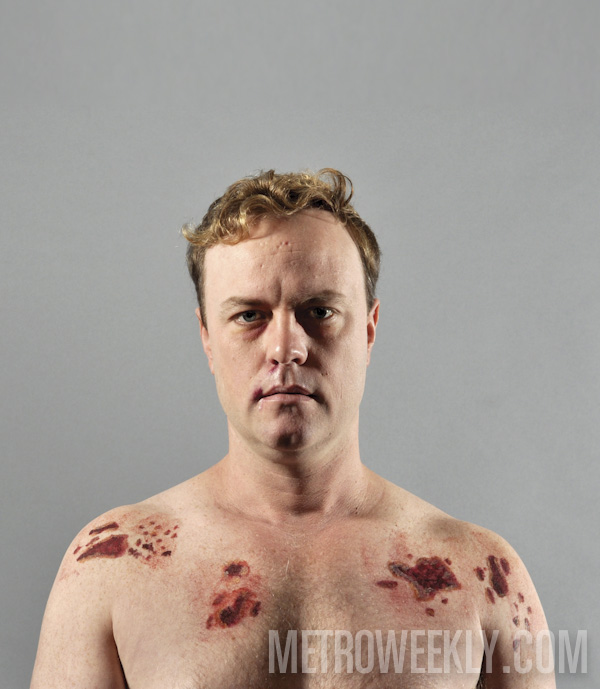 Prior, Angels In America at Roundhouse — Photo: Todd Franson

“AIDS is the lens through which Kushner examines our life in America,” he continues. “While we often think of it as an AIDS play, it is so much more than that. It is a play about our national discourse, and the ways in which we can become polarized. Ultimately, it is a very hopeful play because this is a play where all of the characters start off in their own little Balkanized worlds, where Republicans are with Republicans, where gays are with gays, where Mormons are with Mormons. By the end of Perestroika you have a world in which everyone has…recognized each other’s humanity. That is the ultimate message in Angels of America — a message that is deeply, sorely needed in our American political discourse right now.

“There are parts to this play that ring more true today than they ever have before — certainly with Trump’s nomination as the Republican candidate and with the Republican party passing the most anti-LGBTQ platform ever in the history of a political party. Reminding ourselves about our history, reminding ourselves that there was a time where we — as a government, as a country — were silent as hundreds of thousands of people — hundreds of thousands of our citizens — were dying, is extremely important. Because if we forget that history, we’re going to repeat it again. Sadly, it seems like we’re on a dangerous path right now, and at a more fraught time in our political life than we have been in many many years. 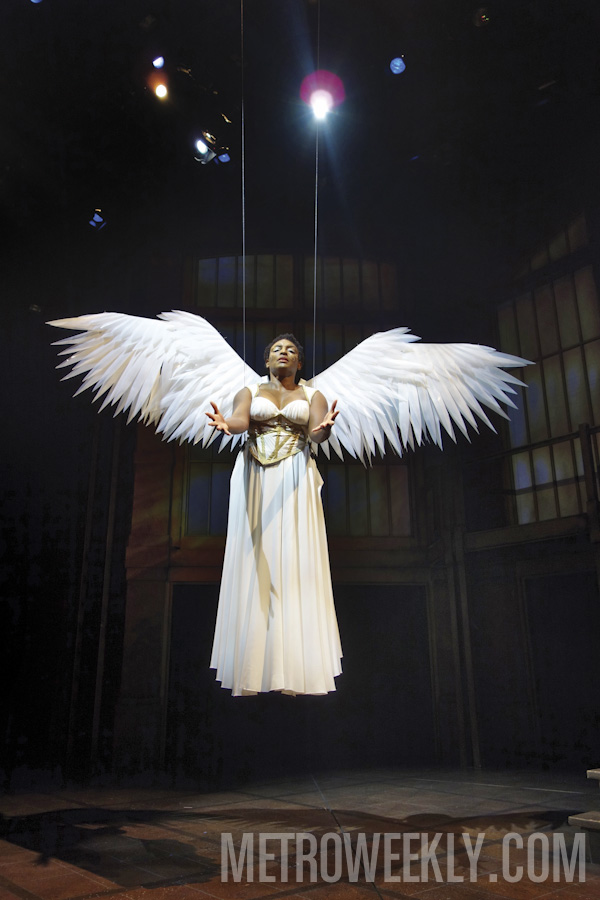 The Angel, Angels In America at Roundhouse — Photo: Todd Franson

“So, to me, this play is urgent,” Rilette concludes. “It’s not even a question of why revive it, or is it worth reviving? Yes, of course it’s worth reviving — it’s a classic play. But more than that, at this point in time, this play speaks volumes as to who we are as a country.”

Angels In America: Millennium Approaches and Perestroika run in rep through Oct. 23 and 30, respectively, at Round House Theatre, 4545 East-West Highway, Bethesda, Md. Tickets are $55 to $75. For a full schedule of remaining performances, including days on which both parts play, call 240-644-1100 or visit roundhousetheatre.org.

Randy Shulman is Metro Weekly's Publisher and Editor-in-Chief. He can be reached at rshulman@metroweekly.com.
← Previous Story 20 black LGBT leaders discuss the new African American history museum
Next Story → Transparent’s Jeffrey Tambor on the role of a lifetime: “It’s made me a better person”