Harmonic Indulgence: The Smith Sisters will combine music and art at The Birchmere 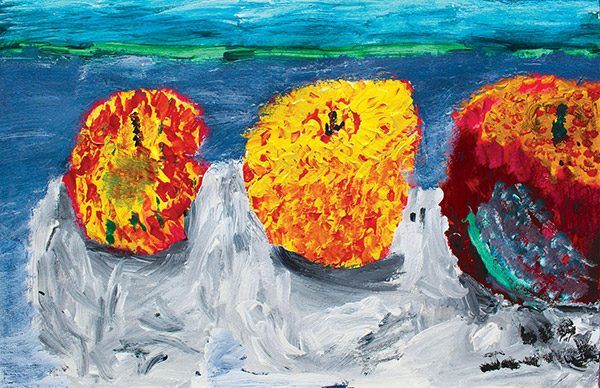 “My husband took him to see some bellydancers,” Debi Smith says of her son. “And he was getting up on stage and belly dancing. One of the dancers said, ‘He’s very free.’ He doesn’t have those kind of superimposed, ‘Who’s looking at me? What do they think?’ He just doesn’t have it. What a relief that is, when you think of it.”

Smith’s son, Lee Jaworek, has Asperger’s autism. As such, he lacks self-criticism, particularly when it comes to professional artistic endeavors. The 26-year-old Fairfax native is a graduate of the Art School of Washington and has had his colorful, often abstract paintings displayed in the Virginia State Capitol Building, the Athenaeum in Alexandria, and on CBS This Morning. “He just sits down, he knows exactly what he’s doing, he goes straight to his work. He does it and then when he’s finished, ‘That’s it. I’m done,'” she says. “I can anguish over this or that in a painting, he’s just fearless.”

Paintings by both mother and son — and Debi’s sister, Megan — will be on display when Debi and Megan perform next Thursday at the Birchmere. “It will be kind of fun for us because we’ve never done anything like this before,” Smith says. The evening marks a milestone for the tightly harmonizing folk group The Smith Sisters. “It is a 35th — I’m choking on that — a 35th anniversary show of when we started touring,” says Smith, also a member of the comedy folk group The Four Bitchin’ Babes. “The thing that’s really fun with Megan is the harmonies — there’s a lot of twining in and out. People can’t always tell who’s who.” Grammy-winning guitarist Al Petteway will also perform at the anniversary show, adding “a third harmony.”

And Lee himself may also take the stage, if he feels the spirit move him — “He had an amazing choirboy voice when he was younger,” says Smith — but his chief focus will be on displaying his art. “His paintings are heavily based on the colors of the rainbow in their purest form,” Smith says. “That’s a really interesting way his autism plays out in his art.”