Home / Arts + Entertainment / Stage / Theater Reviews: “Come From Away” and “The Last Schwartz”

Theater Reviews: “Come From Away” and “The Last Schwartz” 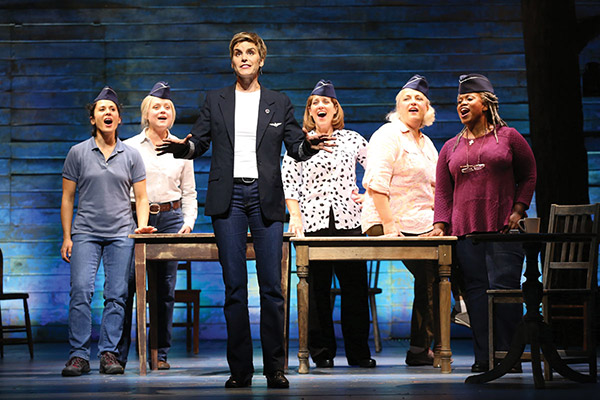 Come From Away — Photo: Carol Rosegg

Maybe you heard about the small town of Gander in Newfoundland, Canada, where nearly 7,000 stranded passengers from around the world were welcomed with open arms on 9/11 fifteen years ago? The town’s seemingly endless grace and generosity was unnerving to at least a few of their American guests. As portrayed in Come From Away (

), the welcome even extended to two gay men both named Kevin. After drunkenly letting slip that they are a couple, the Kevins are greeted with a “praise be to god” by a woman whose daughter, it turns out, is gay. Her admission is followed by other townies rattling off gay relatives. An uncle. A sister. “We somehow ended up in the gayest town in Newfoundland,” one of the Kevins says.

Penned by Irene Sankoff and David Hein, and directed by Broadway veteran Christopher Ashley, it’s an ensemble show through and through, with a dozen actors taking on on multiple roles, alternating between Gander citizens and visitors. It gets a little confusing from time to time to remember when Jenn Colella is Annette from Gander or when she is Beverley, the first-ever female pilot for American Airlines. The fact that we don’t learn this intriguing detail about Beverley until end of the musical, when she sings “Me and he Sky” says a lot about the show’s overall approach. The personal stories become little more than a footnote. 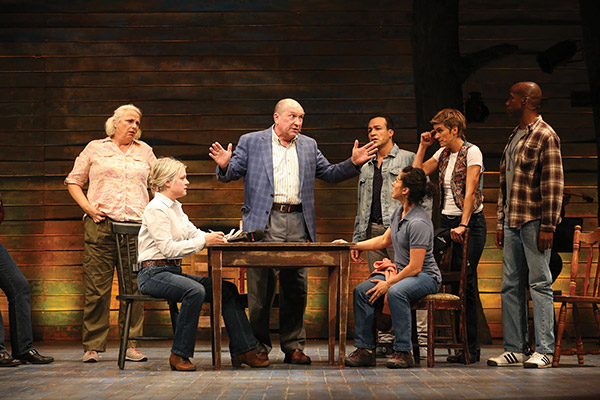 Come Away From — Photo: Carol Rosegg

The true focus of Come From Away is to offer a composite of Five Days in Gander for the unexpected Gander visitors during a time of stress and confusion. We are greeted by two handfuls of locals in the show’s rousing opening number, “Welcome to the Rock,” and a few of them pop up again here and there — yet they’re little more than supporting players telling a bigger story about their welcoming way of life.

It’s no small accident that Come From Away‘s lasting spotlight is on the culture and music of Newfoundland. Celtic folk and rock runs through the blood of these descendants of English, Irish and Scottish immigrants — or at least through Sankoff and Hein’s score. The music is joyous and vibrant, and you look forward to the evening’s big group sing-alongs. It never sinks to the level of schmaltz, instead breaking your heart with tales of loss and things missing among its dozen characters in the immediate aftermath of 9/11. Come From Away never gets graphic in rehashing what actually transpired, making it all the more emotionally resonant.

Ford’s Theatre just announced an extension of the musical, which travels to Gander and Toronto before landing on Broadway in February. The musical’s future is promising. It’s more likely to be the next Once than a Hamilton. Still, you’d be remiss not to welcome it with a visit while it’s in our backyard. 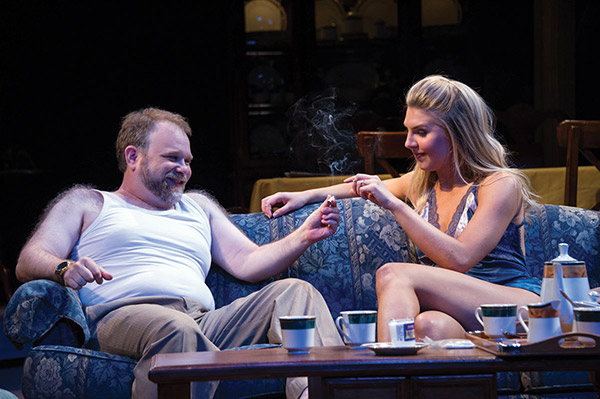 ), focused on a family falling apart. “You may find yourself questioning whether this family will survive,” Immerwahr writes in the program notes, “whether Judaism will survive, and whether any of it will matter if our planet won’t survive.” Oh vey.

We meet the Schwartzes at reunion for the first anniversary of the family patriarch’s death. Only one of the four children, the eldest girl, Norma (Barbara Pinolini), much cared for their hardliner of a father. The Schwartzes are secular Jews who follow no particular traditions and date and marry outside the tribe. And it is the two non-Jewish significant others — Bonnie (Anne Bowles) and Kia (Emily Kester) — that generates the most tension. And the most laughs, from the emotionally volatile Bonnie’s story about conjoined twins that initially sets the play’s tone to Kia’s lighting of a joint using Papa Schwartz’s yahrzeit candle.

In that regard, the play bears a resemblance to Joshua Harmon’s Bad Jews, which played Studio Theater a few years ago, even though the particulars are different. The Last Schwartz isn’t as riotously funny as Bad Jews, but you’ll be tickled and stirred just the same.

Although he seems out of place and says precious little, Simon Schwartz (Andrew Wassenich) is the last Schwartz we see. An undiagnosed autistic, Simon doesn’t let his increasing state of blindness get in the way of his ambitions of being an astronomer. It is his blase attitude about everything — derived from his conviction that the end of humanity is drawing near — that sticks with you.

Doug Rule covers the arts, theater, music, food, nightlife and culture as contributing editor for Metro Weekly. Follow him on Twitter @ruleonwriting.
← Previous Story “More Than A Mouthful” kicks off African-American Collective Theater’s 25th season
Next Story → “Sense and Sensibility” at Folger (review): It doesn’t get much better