“Angels in America” at Round House (review) 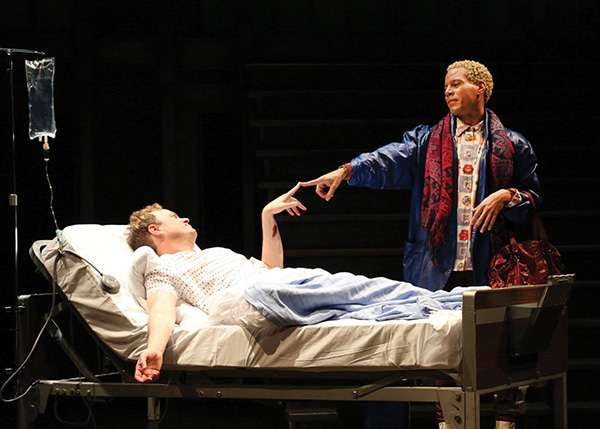 Twenty years after protease inhibitors helped transform AIDS from a death sentence disease to a chronic condition, why are we still talking about Tony Kushner’s two-part saga, Angels in America?

It’s a silly question, of course, for so many reasons. Yet some people have been asking it ever since two of Maryland’s leading theater companies, Round House and Olney, announced a partnership to jointly stage both plays. Anyone who doubts the relevance of Kushner’s astounding epic twenty-five years after the first staging of part one, Millennium Approaches, obviously has never seen the audacious, supremely theatrical work.

Any such doubter also clearly has not been paying attention to the rise of Donald Trump, who wouldn’t have had the success he’s had if it had not been for closeted conservative Roy Cohn, who mentored and groomed Trump to become the Manhattan megalomaniac he is today. Trump may not appear in Angels in any way, but more than a few times you can imagine him saying what Kushner has written for Cohn, though far less eloquently.

It’s one of many details that makes Angels timely — yet it is the overall quality of the staging at Round House that makes Angels in America essential for any serious lover of theater, including that of politics.

) is a wonder to behold. This is a collaboration, however, not a competition. It’s hard to imagine anyone who sees Millennium Approaches not also yearning to see Perestroika, as part one ends on a potent, startling cliffhanger.

The chief thrill of Millennium is its exquisite exposition, with Kushner presenting ideas on weighty topics such as history, race, ethnicity and politics in a lively, energized manner. One such debate finds the gay, Jewish Louis (Jonathan Bock) talking at — but not hearing or respecting — the gay, black Belize (Jon Hudson Odom) in an all-too familiar pattern. And Mitchell Hebert plays Roy Cohn as a blustering bully, a force to be reckoned with, largely on account of sheer will and self-confidence. He never betrays a sense of doubt or regret even as he physically falls apart. Tom Story, meanwhile, is perfectly cast as the play’s troubled hero, Prior Walter, so riddled with self-doubt and regret, so in need of a guardian angel, he begins to lose touch with reality.

Every actor takes on multiple roles, displaying impressive sensitivity and dexterity in quick character and costume changes. We don’t see quite as much of Dawn Ursula or Sarah Marshall as we do the others, but there is perhaps no moment more indelible than Marshall as a soft-spoken, malevolent Ethel Rosenberg haunting Cohn in a hallucinatory moment of utter panic.

Set designer James Kronzer has opened up Round House’s massive stage to accommodate moments in which two scenes overlap and the actors become intertwined in testy exchanges. At one point two characters who otherwise don’t meet in Millennium Approaches, end up in a twin hospital bed together — rubbing shoulders metaphorically, revealing similarities of their personal predicaments. Lighting designer York Kennedy, sound designer Joshua Horvath and projectionist Clint Allen do astonishing work throughout, though their crowning achievement comes during the arrival of the Angel. The show takes flight, fantastically, magnificently, sending a raw, emotional three-hour shock wave through your system.

"Angels in America: Millennium Approaches" at Round House and Olney Theatres

Doug Rule covers the arts, theater, music, food, nightlife and culture as contributing editor for Metro Weekly. Follow him on Twitter @ruleonwriting.
← Previous Story “Sense and Sensibility” at Folger (review): It doesn’t get much better
Next Story → “Urinetown” at Constellation Theatre (review)