He's sexy. He's self-assured. And he has a thing for Spain.

By Randy Shulman on October 2, 2016 @RandyShulman 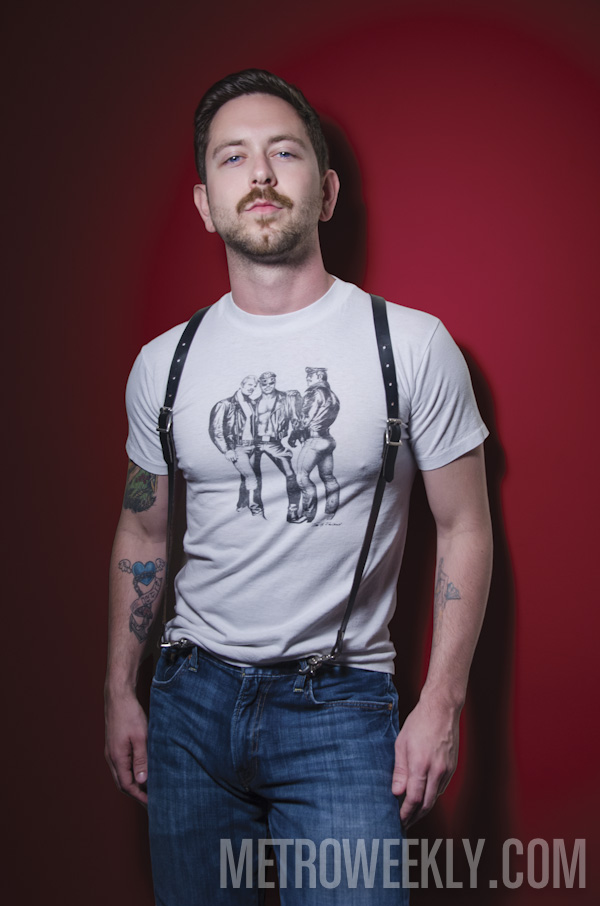 “I’m the wretched claims adjuster,” says David. “That’s me.” Though he’s playfully self-deprecating — a trait that continues throughout an hour-long talk — he genuinely loves his job in the insurance industry. Still, he says, “society views me as the bad guy. The relationship is very adversarial when dealing with insurance. It’s a contract of what we said we would cover. Then you’re dealing with an open market contractor who is working within a different profit margin. There’s a lot of miscommunication. It can get confusing.”

The 29-year-old, who in a former life was a bartender at a Columbus, Ohio bar called The Exile, is also Pagan. “It’s an earth-based religion,” he explains. “We revere the earth and the cycles and everything like that. We don’t believe in the concept of Satan.” Paganism provides David, who came out when he was 12 (“I was pretty self aware. I was a little shit”), a feeling of inner-solace.

“It’s helped me deal with the inevitable cycle of life in all senses,” he says. “You will get old. You will get feeble. You will not get compliments one day. You could die tomorrow. And it will start over. I’m constantly aware of that.” 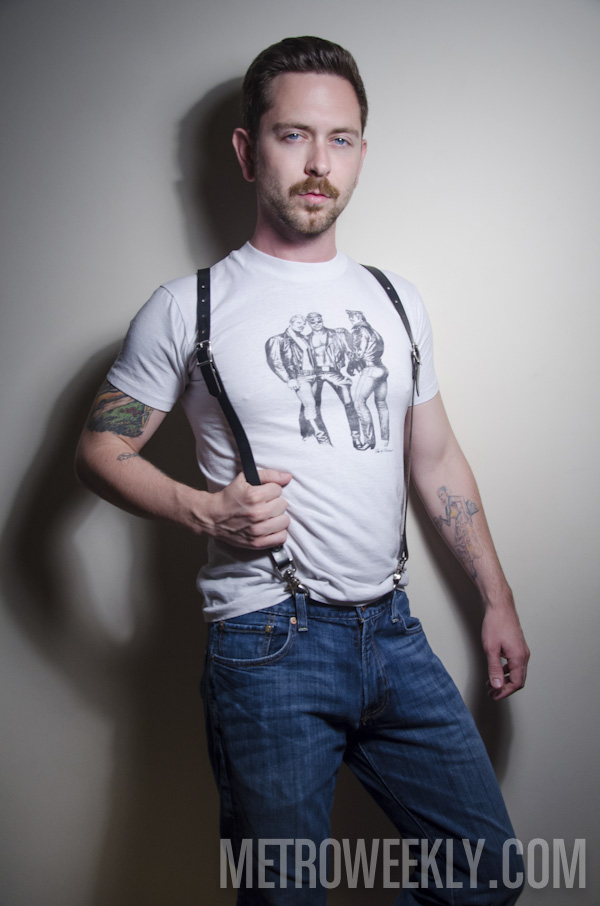 What’s on your night stand?
A book — The Sea Priestess by Dion Fortune — and condoms.

Condoms on the nightstand?
Yeah, yeah, yeah. It’s more like an old antique chest. My bed’s on the ground. Very feng shui.

Are you a night owl or an early riser?
Early riser. I live off very little sleep. Just being a workaholic, I think, sometimes it’s just hard to sleep. I see it as wasted time.

What’s the last thing you bought — before the donuts you brought to this interview?
I bought fast food late night because I smashed it. I’m gross. I will slingshot into morbid obesity once my metabolism kicks because I eat all the time.

If you could have any superpower, what would it be?
Telekinesis or mind control. A Jean Grey, if I’m really being honest. 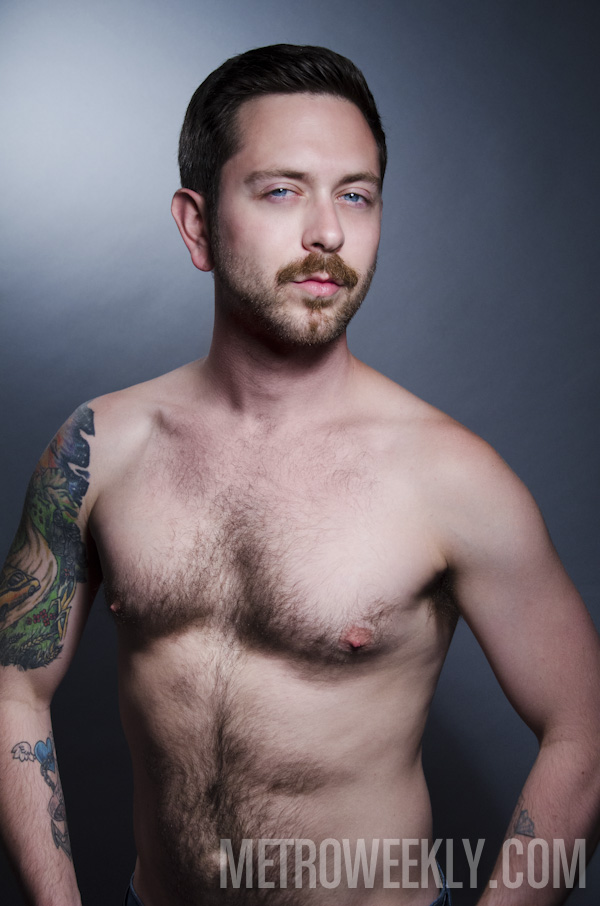 What would you do with it?
I’d live in a cabin in the woods and be by myself. I don’t think I would do anything nefarious with it.

You could at least mind control Donald Trump for a while. Get him to leave the country for the next two months. What was the last thing you binge-watched?
Rick and Morty. It’s a sci-fi cartoon about a drunk grandpa who’s a super genius and his grandson who isn’t very smart and is really awkward.

What was the last movie you saw?
I hate going to the movies. The last one I saw was Ex Machina. I’m the lamest person alive.

Get David’s Wraparound Coverboy Mug! Sale: 50% Off for a limited time. Click here.

Who was your first celebrity crush?
It’s embarrassing to say, but it was Mr. Clean. He’s hot. He’s all muscled. He’s ready to do the job.

He’s drawn.
Yes, but seeing him was probably the first time I understood myself.

What are your three favorite night spots?
I love Larry’s. It’s such a hole in the wall, and it’s perfect, and everyone’s nice. Uproar — I like their rooftop patio. Freddies, because it’s near where I live and they serve food. 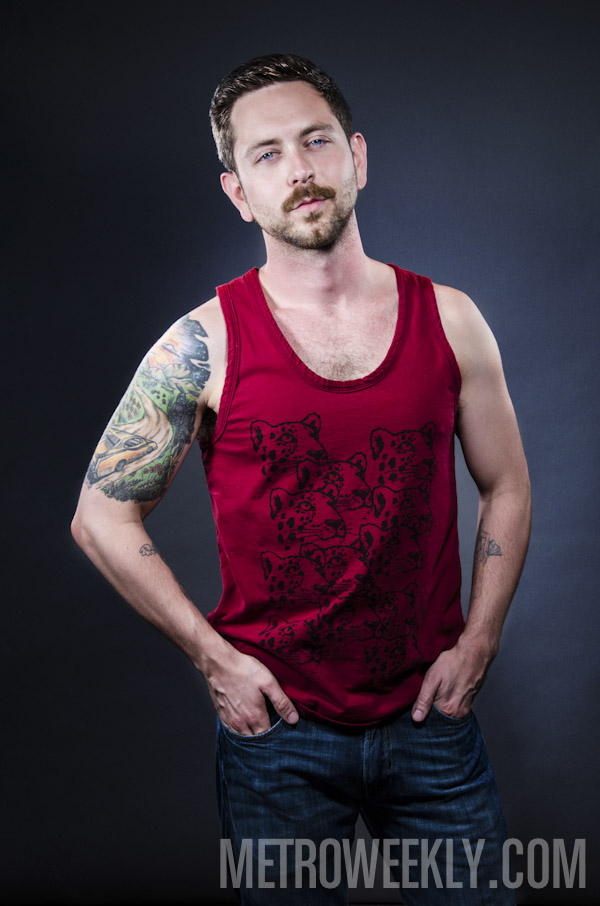 What makes an hour happy?
Not being the drunkest person there. Literally seeing someone sadder than myself there is the kind of happy hour I want to be in.

Pick three people living or dead you’d like to have bourbon on the rocks with.
Tan Mom, from The Howard Stern Show. Elliot Smith, who was a folk singer who passed away. And my great grandmother, Noni. It would be such a shit show.

What animal would you be?
A raccoon. They’re cute but crafty.

Boxers, briefs, or other?
I like boxers. I need a flow.

Grindr, Scruff or in person?
In person, then Scruff.

How many dates have you had this year with guys you’ve met on an app?
A lot. Wait — define date. What’s a date? Are you saying we go out and have coffee? If so, honestly, still a reasonable amount. Maybe 20. Some were completely platonic. 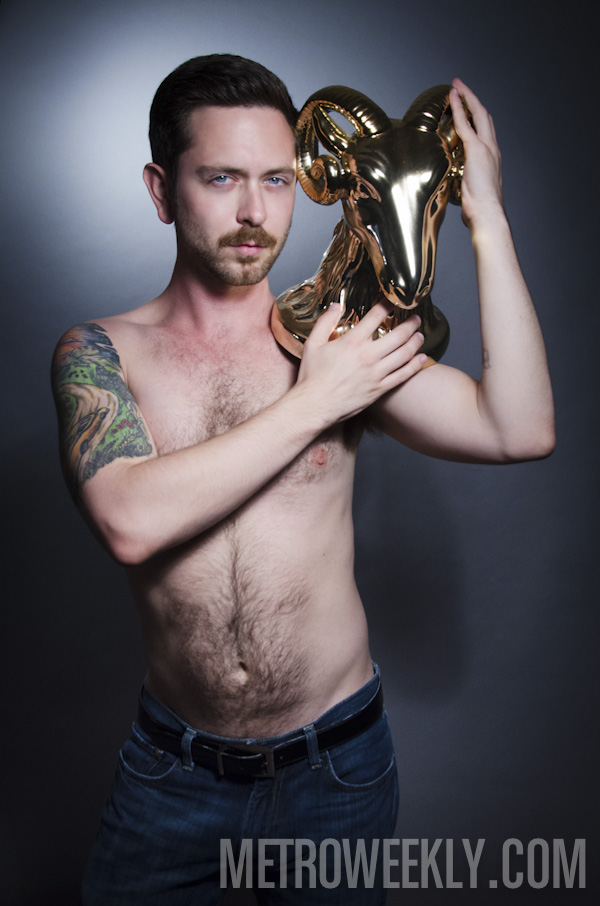 How many of those were good dates?
A couple. To me, it’s the more about the longevity of the friendship. I’m not going to judge someone from one meeting, because I think that’s a little harsh. Maybe they were having a bad day or weren’t feeling well.

What’s your biggest turn on?
Confidence.

What’s your biggest turn off?
People who don’t want to do hard work.

Describe your dream guy.
He’s confident, he’s hyper-intelligent, he’s quiet. But when it matters he tells me no, tells me to shut up. I need that kind of person.

Given your Mr. Clean thing, he probably also needs to be good with a mop.
Yeah, I envision my perfect guy as a plumber who owns his own company. I’m not joking. That’s what I view. A man who starts his own business and builds it up I have a lot of respect for. That’s a ballsy guy.

Define good in bed.
Self-secure, with a condom. 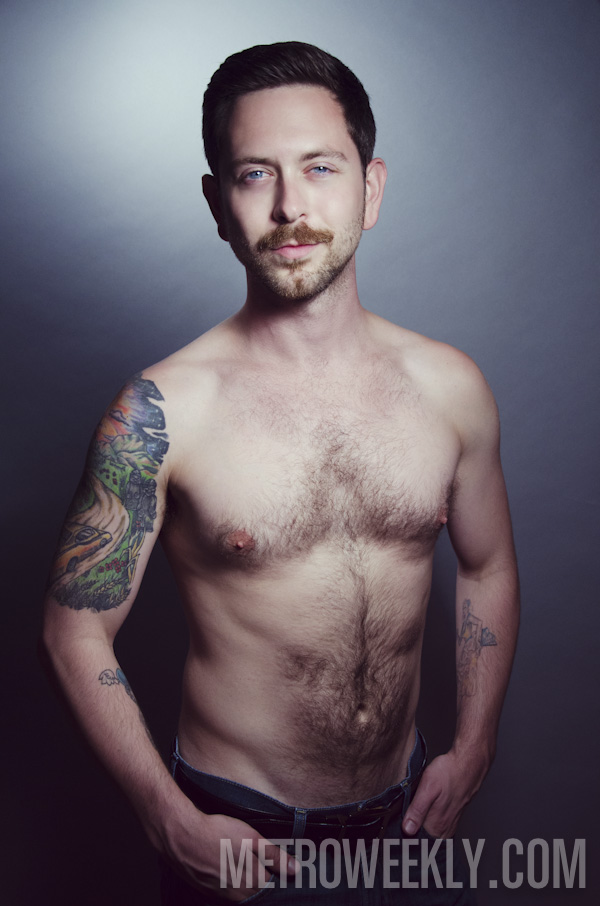 What’s the most unusual place you’ve had sex?
When I was younger, my ex-boyfriend and I went skeet shooting on his grandfather’s property. We made love next to the bay on a blanket with our shotguns around us. I’ll never forget it because the calla lilies were up, and I was thinking, “Man, if anyone catches us, we’re both armed, so I guess I don’t really care.”

What’s the most memorable pickup line you’ve ever heard?
I never get a legitimate pickup line. I get really bad ones. On apps, I get a super sad, creepy old man saying something filthy, knowing it’s not going to work, but he’s just casting a wide net. It’s always gross, it’s never lovely. When I was a bartender, they’d say what a nice tight little white ass I had, or “I’m real hungry, come sit on me.” Stuff so vulgar, I just erased it from my memory.

What’s your favorite make out music?
I hate to say it but really, really gross Def Leppard hair rock. Bad ’80s music while I’m being hiked up against some pool table. That’s the fantasy in my head today. Tomorrow, it’ll be like Enya lullabies.

What’s your dream vacation?
I love Spain and have been twice. I love being there.

Apple or Android?
Apple now. I was Android forever.

You look glum about it.
Because I was bullied into it. I was like, “Okay I’ll do it,” and now I like it — but there’s things I don’t like about it. I don’t know. I can’t explain it. I’m just being a brat.

Marvel or DC?
You know what? I don’t know the difference.

Star Trek or Star Wars?
Star Trek because there’s so many different versions.

Salad or Big Mac?
Both. But salad now actually since I had a Big Mac last night.

Clinton or Trump?
Clinton. I’m so over talking about it.

Can he win?
His name is on the ballot. He can win.

What happens if he wins?
Honestly, I think he would quit. I don’t even know why he wants the job.

Which of these daddies do you want to get a spanking from — Hugh Jackman, Tom Selleck, or Idris Elba?
Hugh Jackman, even though Elba is a close second. I want them both. They could just meld together it would be perfect. 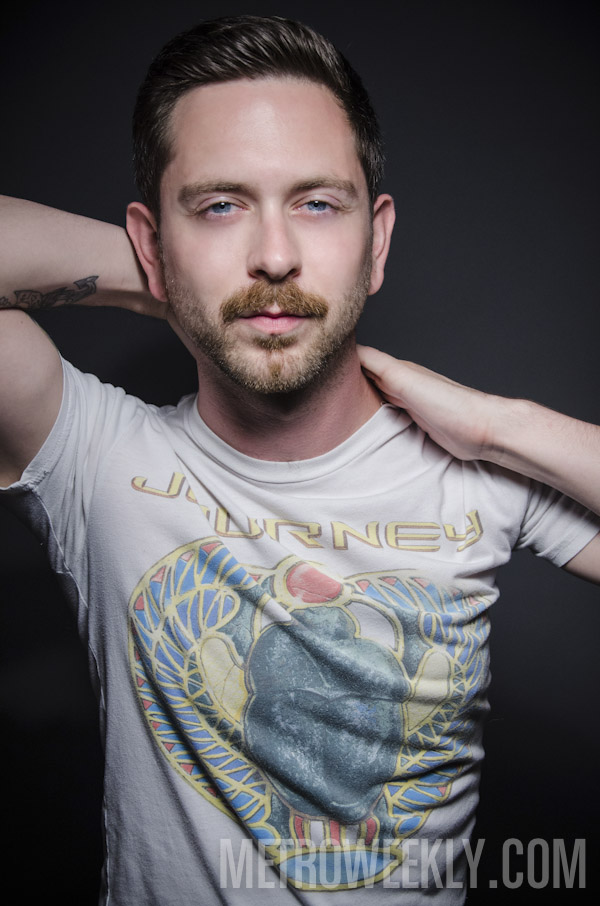 Have you ever faked it?
Yeah, I’ve faked it. Sometimes it’s just over or they’re finished and you’re not going to get there, so it’s just the polite thing to do. They never realize you faked it.

What era do you think you belong in?
Two thousands years in the future. I want to see humans with expanded craniums living in a virtual world.

If your home were burning, what’s the first thing you’d grab while leaving?
A handmade dreamcatcher made by my best friend. There’s no glue or adhesives — it’s all animal hide and a branch from her apple tree that she whittled into a circle. It’s with feathers that she found from birds from around where she lives. It’s pretty awesome.

What’s your greatest fear?
Being a burden.

What would you like to be remembered for?
Never knowing what was going to come out of my mouth. Sometimes I’m an irreverent person. I feel like sometimes people meet me and they’re like, “I’ve never met someone like you.

What are you most grateful for?
My family, definitely.

Would you rather live longer or wealthier?
I’d say live longer, but that doesn’t technically mean better, so that’s a hard question. So, I’d live wealthier, because you can buy health. That would be my devil’s gamble.

Finally, what is your philosophy of life?
There are some things you can’t change and you just have to let them go, because you’ll be a lot happier.

Randy Shulman is Metro Weekly's Publisher and Editor-in-Chief. He can be reached at rshulman@metroweekly.com.
← Previous Story Coverboy: Christian
Next Story → Coverboy: JR