Other area bars, from Annie's to Town to Ziegfield's follow suit after brewer announces support of Trump/Pence ticket

By John Riley on October 27, 2016 @JohnAndresRiley 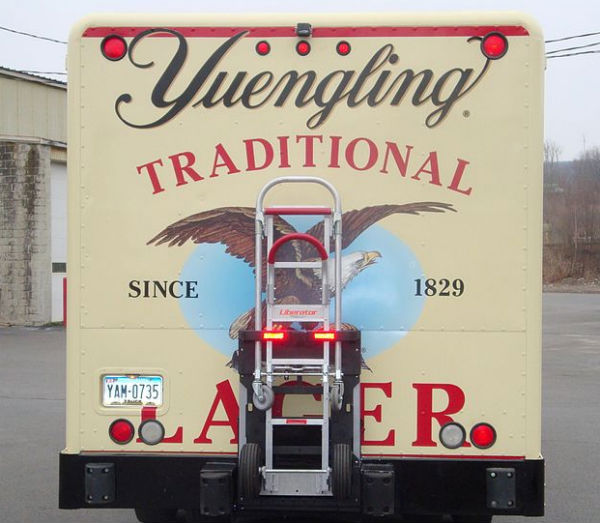 David Perruzza, the manager of JR.’s Bar & Grill, sparked the movement by posting a video of himself literally removing Yuengling’s beer tap.

“So, Richard Yuengling and his company feel they should support Trump,” Perruzza says in the video. “Well, this is a gay bar. And I am a gay bar manager, and we do serve Yuengling, but, from this point on, because Trump has Pence, and Pence is one of the biggest idiots ever, and very anti-gay, probably one of the most anti-gay politicians ever, I am doing this.” He then unscrews the tap head.

Other area gay bars have since followed suit on social media, including Level One, who wrote “In light of Yuengling’s support of Donald Trump & Mike Pence, whose anti-gay views are in direct contrast to the gay lifestyle, Level One will no longer sell their product,” and The Green Lantern, which notes it has “taken the Yuengling tap off the bar effective immediately.”

Number Nine posted a video to Facebook of one of their bartenders emptying out Yuengling bottles into two large orange buckets, with the caption: “Byeeeeeee.” 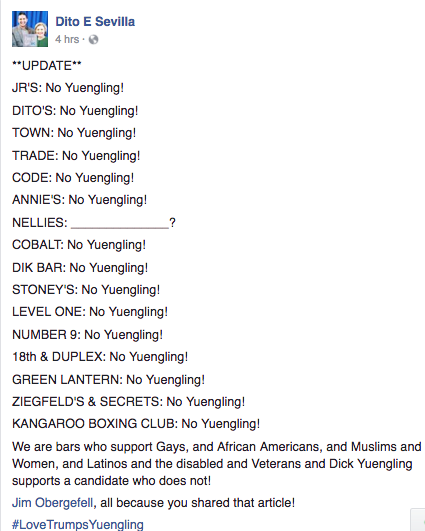 Jon Parks, general manager at Ziegfeld’s/Secrets, was torn over whether to pull the lager from his shelves, noting that Dick Yuengling did not say he was endorsing the Trump-Pence ticket because of anti-LGBT views. Still, after consulting owner Alan Carroll, Parks yanked Yuengling from the bar.

“This in some ways brings back that time when I lived in Hollywood, and I did indeed go down Hollywood Boulevard in protest of Anita Bryant’s ridiculousness,” says Parks, referring to the former Florida Citrus Commission spokesmodel who spearheaded a 1977 campaign to rescind an LGBT-inclusive nondiscrimination ordinance in the state. The Yuengling boycott is the first he can remember based on a company’s support of a political candidate, rather than a company’s actions, such as support of an anti-gay ballot initiative. But he doesn’t foresee it setting off wars between liberals and conservatives over which bars they choose to support.

John Riley is the local news reporter for Metro Weekly. He can be reached at jriley@metroweekly.com
← Previous Story Us Helping Us Honors Ron Simmons at Gala
Next Story → BREAKING: Supreme Court will take up Gavin Grimm case