Jeffrey Hurant, former CEO of Rentboy.com, faces up to five years in prison and a $10 million fine 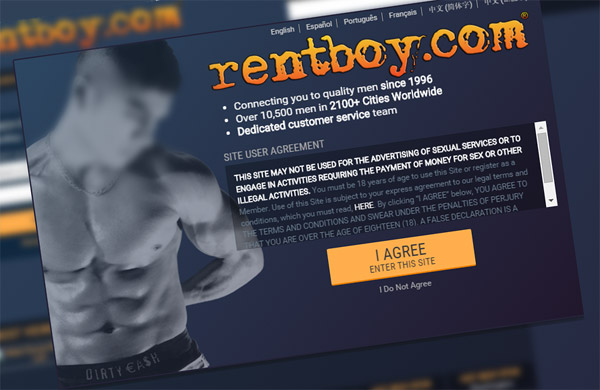 The founder and CEO of Rentboy.com has pleaded guilty to promoting prostitution.

Jeffrey Hurant, 51, told Brooklyn’s Federal Court last week that he knew ads on his website were for male prostitution. He now faces up to five years in prison and a $10 million fine for conspiring to launder the proceeds of the adverts through another corporation, New York Daily News reports.

Rentboy.com’s headquarters were raided by federal authorities last year, with Hurant and six other employees arrested. After public outcry from LGBT advocates, who questioned why Rentboy.com was targeted over other similar sites, charges against the six employees were eventually dropped.

Catch up on all the details of the case here

Hurant founded Rentboy.com in 1996, targeting primarily gay men. The site would allow escorts or masseurs to advertise their services, with clients paying membership fees to contact them.

The website carried several disclaimers saying that the escorts were intended for companionship and not sexual services. But prosecutors in Brooklyn insist that the site was simply promoting prostitution.

But the trial hasn’t been without criticism.

“It was a completely sketchy, outrageous prosecution in the 21st century,” activist Bill Dobbs told NY Daily News. “I presume [Hurant] was backed into a corner by [U.S. Attorney General] Loretta Lynch and company.”

Hurant has agreed not to appeal his sentence if Federal Judge Margo Brodie orders two years or less in prison and a fine no greater than $10 million.

Last year, Metro Weekly spoke with an escort who advertised on Rentboy.com. Nick Kinkand advocated for the legalization of sex work, saying it was the only way to improve the lives of those who engage in it. He also opened up on what escorts could earn — and what he witnessed as an escort on the site.