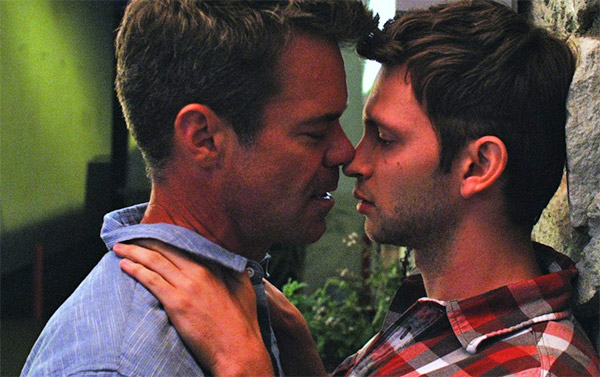 Opening this year’s Reel Affirmations festival is a movie that initially bursts with potential. Retake pulsates with mystery, danger and the sense that we’re getting a fresh take on typical LGBT cinema fare. Unfortunately, it peters out during its 90-minute runtime into something altogether more cliched.

Retake opens on Jonathan (Tuc Watkins, Desperate Housewives), as he lands in San Francisco and immediately proceeds to source a male prostitute. It’s here that Retake is at its strongest, as Jonathan demands the man wear a wig, a certain cologne, and roleplay as a specific person. It’s a tense opener — unaware of his ultimate motives for the roleplay, this has all the makings of murder, or something similarly sinister.

Jonathan fails to satisfy his needs, however, and returns to the prostitute hangout the following night for another shot. There, he picks Evan (Devon Graye, Dexter), and begins the scenario — wig, cologne, roleplay — once more. After spending the night together, Jonathan asks Evan to join him on a three-day road trip to the Grand Canyon, all expenses paid (and a hefty deposit up front). For any sane audience member, alarm bells will start to ring, but Evan willingly accepts.

Director Nick Corporon, who co-wrote Retake, maintains his strongest grasp on the film to this point. Unfortunately, it’s easy to suss out why Jonathan wants Evan to dress a certain way, act a certain way, stand a certain way for photos, which only makes the rest of the film feel overly long. It’s as though the first ten minutes and the big reveal were planned together, with the remaining 75 minutes stretched out into a road trip movie.

Thankfully, Watkins and Graye work well together, with the right amount of uncertain chemistry as they spend more time on the road. Watkins maintains one steely expression for most of the film, but he can convey changes in Jonathan’s mood with the flick of an eyebrow, the slightest of smirks, or the dart of an eye — it’s a subtle, reserved performance that makes the most of what we presume was the simple direction “be mysterious and ambiguous!” Graye has the harder task, forced to play dumb long after the audience has guessed the film’s big reveal, but his Evan is likeable, energetic, magnetic (particularly after a much-needed and plot-dependant haircut).

Both men are working with a script that seems to think it is far more complex and mysterious than it actually is. As Evan and Jonathan work their way into the desert and gradually grow closer, we’re asked to believe that at no point would Evan refuse the money and just go home — even as Jonathan throws out “I’m paying you, do what I want” with the frequency of a Kardashian social media post. It’s all the more disappointing that Retake‘s strong opening makes way for a slow slide into the sort of indie pap that LGBT cinema is overflowing with.

Corporon shows himself more than capable of containing his actors, controlling their scenes well, and making the most of the incredible vistas and tight interiors that comprise the various locales in the film. What he fails to do, however, is end the film ten minutes early. There’s the chance for a more daring, less obvious and explanatory resolution, one more befitting of Retake‘s promising opening, but it instead resorts for saccharine redemption. Retake is by no means a bad film — indeed, it has several strong moments — but it feels like a missed opportunity to craft something truly daring and different.

Rhuaridh Marr is Metro Weekly's online editor. He can be reached at rmarr@metroweekly.com.
← Previous Story A Complete Guide to the Films in the 2015 Reel Affirmations Film Festival
Next Story → AWOL