By Randy Shulman on November 17, 2016 @RandyShulman

A native of North Carolina, Brian is vocally ashamed of his home state. “It is such a big gay hate state,” the 24-year-old student says in a charming, mild southern drawl. “And with them doing the HB2 bathroom law, I’m like, ‘I’m so glad I don’t live there anymore.'” Growing up was a challenge for Brian, who, even as a teen, wore flamboyant outfits like badges of honor.

“In my middle school years, I was bullied, I was beat up. I was literally tripped right in front of a teacher when I was in sixth grade and literally busted my nose on the floor, and she did nothing to acknowledge it,” he says. “Nothing. I literally just picked myself up and ran behind some lockers and cried my eyes out that whole day until I went home.” It kept him in the closet for years.

These days, things are considerably better for Brian, who is in school with ambitions of becoming a microbiologist, is fully comfortable in his worldview. “I’m gay until the day I die,” he smiles. “I’m going to wear makeup. If I want to run around in stilettos, I’m going to run around in stilettos. I’m going to do me…. I just love fashion and I love standing out, I love being that one character that whenever I’m walking down the street, you get that first glimpse and then it’s like, ‘Oh, no. I got to take a second glimpse back. I got to figure out what the hell just walked past me.'” 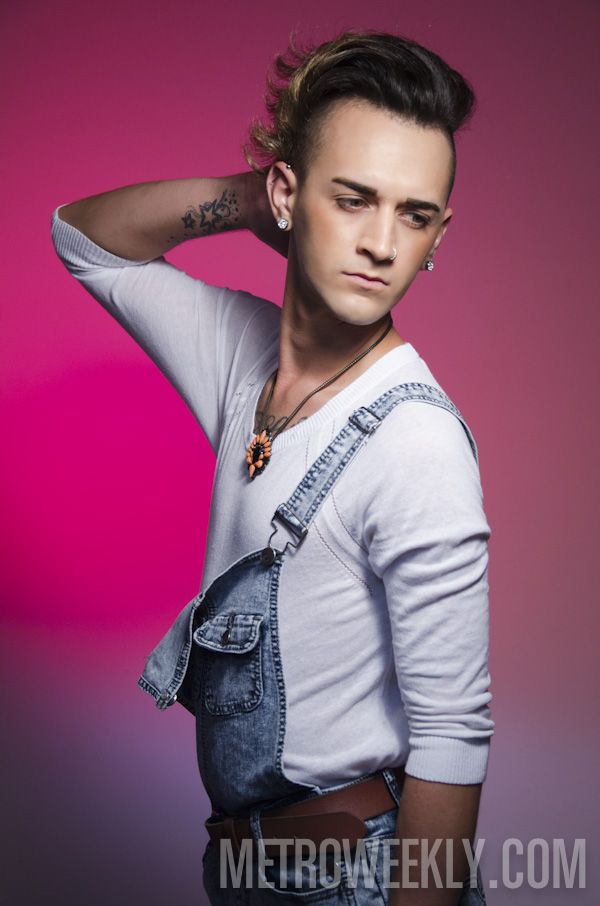 What’s on your nightstand?
My iPhone, and a holiday picture that I had taken with my boyfriend and one of his coworkers and her boyfriend. We were plastered that night.

What’s in your nightstand drawer?
Fun toys. Lube, because you never know when you need it. And this amazing strawberry-flavored douche that you can put on your anus that is just absolutely immaculate. I didn’t taste it on somebody, it’s been tasted on me, but I’ve tasted it. Oh, my god, I never thought I would love strawberry as much. I hate the fruit but I love the gel.

And toys, you said. Are they good toys?
They make this fairy get really, really happy and excited.

What’s the last thing you bought?
Makeup. I love the expensive brands, so I bought it from Mac, Urban Decay, and Sephora. I’m recently starting to jump on the board with getting some of Jeffree Star’s products.

If you could have any superpower, what would it be?
The superpower to wish for anything I wanted and it would come to me.

What would be your first non-sexual wish?
I would wish for a career of being a very popular and famous model. It’s not a career that I want to do for the rest of my life, but if it gets me to fame quickly, I’m all game for it.

What did you last binge-watch?
Archer. It’s so funny. Malory is my favorite character, because she’s just the old drunk that is like, “I’m the boss-ass bitch. You guys are going to do what I say while I sip on my alcohol and still be able to walk a straight line.”

Who was your first celebrity crush?
Adam Lambert.

What are your three favorite night spots?
Green Lantern, Black Whiskey, and Trade.

What’s your drink of choice?
I love pina coladas.

What’s your biggest turn-on?
Having broad shoulders, like a football player build structure.

Define good in bed.
Making me climb the walls like Spider-Man. You’ve got to have a lot of stamina, because I’m the kind of person where I’m like, I don’t want to hurry up and finish sex.

What’s the most unusual place you’ve ever had sex?
The couch. Because the shower, I don’t find unusual, I find that amazing, as long as the water doesn’t get in the area that’s being penetrated. I want to keep my tightness, I don’t want to be loosey goosey there. We’re not going to try to run a train through an anthill.

That’s one way to put it. What’s your favorite makeout music?
Really dirty, nasty sex music, where it’s actually talking about different things you want to do to the person.

What’s your dream vacation?
To visit Paris. That Eiffel Tower, I just love it. I eventually want to get the Eiffel Tower tattooed on my body.

Which of these daddies would you want to get a spanking from: Hugh Jackman, Idris Elba, or Tom Selleck?
Hugh Jackman.

Claws in or out?
Out. Let the scratching prevail, because I’ll do my own scratching, too.

If your home were burning, what’s the first thing you’d grab while leaving?
My sugar glider. She’s a marsupial, four months old, and is part of the flying squirrel family.

You have a squirrel for a pet.
She’s really, really little. Her name is Miss Penny, but I call her Prissy Penny because she has to be like me — prissy, sassy, and knows that she’s everything.

Does size really matter?
I’m indecisive with that. I’m not really hell-bent on long dick, small dick — if you just know how to work that thing and know how to make me say your name in syllables, then you got me.

What era do you feel you belong in?
The Renaissance. Primarily because I would try to be the first gay queen. I would be the most medieval bitch walking down that muddy street — except, of course, I would have a scarlet red carpet rolling down to the village. If got on my nerves, I’d have to pull out an antibacterial wipe and rub your chest. That means get away from me.

They didn’t have antibacterial wipes back then.
That’s just me being very optimistic and hoping. I could be the one that actually created that.

Maybe you could come up with the pop-up canisters as well.
I would’ve been a notorious gay queen known for two very, very useful items.

You would’ve saved everyone from the plague.
See? I’m thinking like a microbiologist!

What would you like to be remembered for?
For my bright personality, the character that I am.

Is Donald Trump your president?
No, sir, he is not. He’s a chump. My president will forever and always be Hillary. Until Michelle comes for 2020, and then boss is going to get the house.

Get Brian’s Wraparound Coverboy Mug! 50% Off for a limited time. Click here.

Are you worried for the next four years?
Actually, I am. I am not fearful for my life, but I definitely think there will be a drastic change, and some uncomfortable times that us gays are going to have to undergo. It’s inevitable.

Were you surprised by the results?
Yes, I was, because it made me sit there and say, “America, have you really stooped that low?” Go ahead and accept defeat now. That doesn’t mean the battle’s over.

What do you like best about your life?
I’m happy that I’m me.

Would you rather live longer, or be wealthier?
I want to be a little bit wealthier. Because I’m not scared of death. It’s coming for me. In fact, I’m going to have a fuckin party when I die, because there’s a bejeweled crown in Hell, if that’s where I’m going, waiting for me to slap on my head and just sit there looking luxurious.

What’s waiting for you in Heaven?
I’ll probably have a gorgeous mansion that’s splattered with the color of Pepto Bismol. My front lawn would be made of nothing but cake with sprinklers spraying out rainbow sprinkles that go on cake.

Wow, that was super gay.
I didn’t think it could get any gayer.

I’m sure if you threw in a unicorn…
With the pit crew from RuPaul’s Drag Race riding them.

What inspires you to be a better person?
My mom. I love my mom dearly. I am a hardcore mama’s boy, and I just want to get to that point in life where I can literally say, “Mom, I just bought us two tickets to the Bahamas. Let’s go.”

Finally, what’s your philosophy of life?
Just have fun, be you. There’s no point in walking in a world as a shadow. Don’t linger about. Life is meant to be lived. I don’t know what kind of party you’re going to, but I know what party I’m going to, because I’m living life right now. I’m not exactly at my full potential of where I want to be in life, but I’m living it. That’s it, just be yourself. Fuck what everybody else thinks.