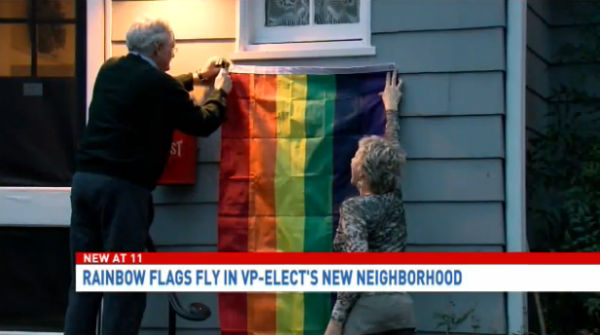 Some Northwest D.C. residents in D.C.’s Chevy Chase neighborhood are hoisting rainbow flags as a symbolic sign of protest against Vice President-elect Mike Pence, who has temporarily moved into the neighborhood, WJLA reports.

Pence will reportedly stay on-and-off at the house he is renting until January, when he takes the oath of office. He will then move into the vice president’s residence at the Naval Observatory.

In the meantime, though, his neighbors are making it known that they disagree with his stance on LGBT rights.

Ilse Heintzen, who thought up the idea, says hanging rainbow flags is a “respectful” way of showing she disagrees with his ideas about LGBT rights. Pence, as governor of Indiana, is probably best known for pushing a Religious Freedom Restoration Act that allowed businesses and other entities to discriminate against LGBT people under the guise of “religious freedom.”

Pence also has a long history of voting against LGBT rights, including the Employment Non-Discrimination Act, during his time in Congress from 2001 to 2013.

He opposed the repeal of the military’s “Don’t Ask, Don’t Tell” policy, which banned LGBT military members from serving openly. During his 2000 congressional run, Pence said in a statement on his website that “resources should be directed toward those institutions which provide assistance to those seeking to change their sexual behavior,” which many have interpreted as support for conversion therapy.

Currently, about a half-dozen Pride flags are hanging at houses along the block. WJLA reports that some other neighbors are planning to get in on the trend.

“I have no idea what he will think about, but I hope he will change his mind,” Heintzen said of Pence’s reaction to the flags.

“This is one way that I can show my disagreement,” she added.

John Riley is the local news reporter for Metro Weekly. He can be reached at jriley@metroweekly.com
← Previous Story Earline Budd steps back in to fill a void in transgender community
Next Story → Community Profile: Sis’tah Talk at the DC Center