By John Riley on December 13, 2016 @JohnAndresRiley 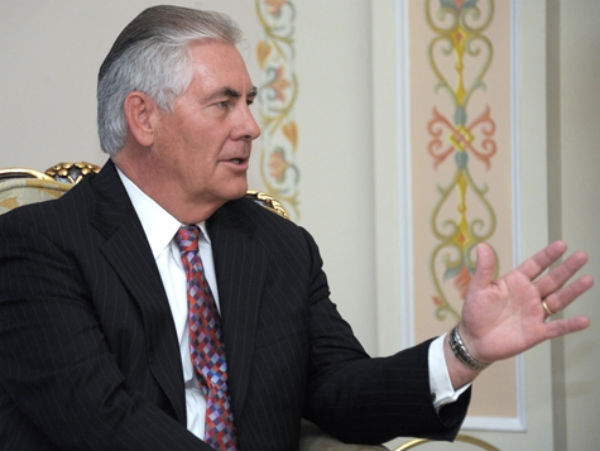 Tillerson – Photo: Office of the President of Russia, via Wikimedia.

LGBT record: Oversaw ExxonMobil when the company was dragging its feet on adopting protections for LGBT workers. He also pushed the Boy Scouts of America to accept openly gay Scouts during his tenure as president of the organization. While Tillerson’s record is mixed, his coziness with Russian President Vladimir Putin — known best for his propagation of anti-LGBT laws — could be concerning, particularly if he adopts a “hands-off” approach with Russia.

One of President-elect Donald Trump’s more eyebrow-raising picks is that of Rex Tillerson, the chief executive of energy company ExxonMobil, as Secretary of State. Trump officially announced his pick of Tillerson on Tuesday, praising the CEO’s backstory as the “embodiment of the American dream” and particularly praising the relationships that Tillerson has been able to cultivate with world leaders during his tenure as CEO of Exxon.

“[Tillerson’s] tenacity, broad experience and deep understanding of geopolitics make him an excellent choice for Secretary of State,” Trump said in a statement. “He will promote regional stability and focus on the core national security interests of the United States. Rex knows how to manage a global enterprise, which is crucial to running a successful State Department, and his relationships with leaders all over the world are second to none. I can think of no one more prepared, and no one more dedicated, to serve as Secretary of State at this critical time in our history.”

When Trump initially floated Tillerson’s name for the position this past weekend, he was criticized not only by Democrats but by Republicans, including Sens. John McCain (Ariz.), Lindsey Graham (S.C.) and Marco Rubio (Fla.), who expressed alarm at Tillerson’s close ties to Russian President Vladimir Putin. Tillerson was awarded the country’s Order of Friendship in 2013 after ExxonMobil signed a deal with state-owned Russian oil company Rosneft that allowed the company to drill for shale oil in Russia’s Arctic territories.

“I don’t know what Mr. Tillerson’s relationship with Vladimir Putin was, but I’ll tell you it is a matter of concern to me,” McCain said in an interview with FOX News. “You want to give the president of the United States the benefit of the doubt because the people have spoken. But Vladimir Putin is a thug, a bully and a murderer, and anybody else who describes him as anything else is lying.”

As a result, Trump can likely expect a heated confirmation fight that’s likely to draw fire from members of his own party, in addition to the expected opposition from Democrats. Another concern is that if the State Department, under Tillerson, pushes for lifting sanctions currently in place against Russia, ExxonMobil will reap the benefit, creating the appearance of a conflict of interest.

On LGBT issues, Tillerson served as president of the Boy Scouts of America from 2010 to 2012. During that time, he was reportedly an advocate of amending the organization’s policies to allow openly gay youth in Scouting.

Yet during that same time, and for three years afterward, ExxonMobil, under Tillerson’s watch, resisted calls to adopt employment protections for LGBT employees. According to ThinkProgress, the ExxonMobil board claims it did not need explicit protections for LGBT employees because of the company’s “zero tolerance” policy for harassment and discrimination. The company was later sue and accused of violating Illinois’ nondiscrimination law after an investigation by Freedom to Work found possible evidence of bias against out LGBT job applicants. That lawsuit is still pending before the Illinois Human Rights Commission.

In 2012 and 2013, the Human Rights Campaign gave ExxonMobil a rating of -25 on a zero to 100 scale for its Corporate Equality Index, making it the only company in history to earn a negative rating. The reason for the negative rating was not simply the lack of LGBT protections and benefits for LGBT couples or families, but because the company’s shareholders repeatedly voted against adopting such protections at a time when other corporations and Fortune 500 companies were doing so. In 2015, the company finally changed its policy to ban discrimination on the basis of sexual orientation and gender identity.

John Riley is the local news reporter for Metro Weekly. He can be reached at jriley@metroweekly.com
← Previous Story Arkansas Supreme Court won’t allow lesbian moms to be listed on birth certificate
Next Story → Churches drop lawsuit against Massachusetts transgender law