A leather titleholder, Peter is also a pup and a composer

By Randy Shulman on January 13, 2017 @RandyShulman 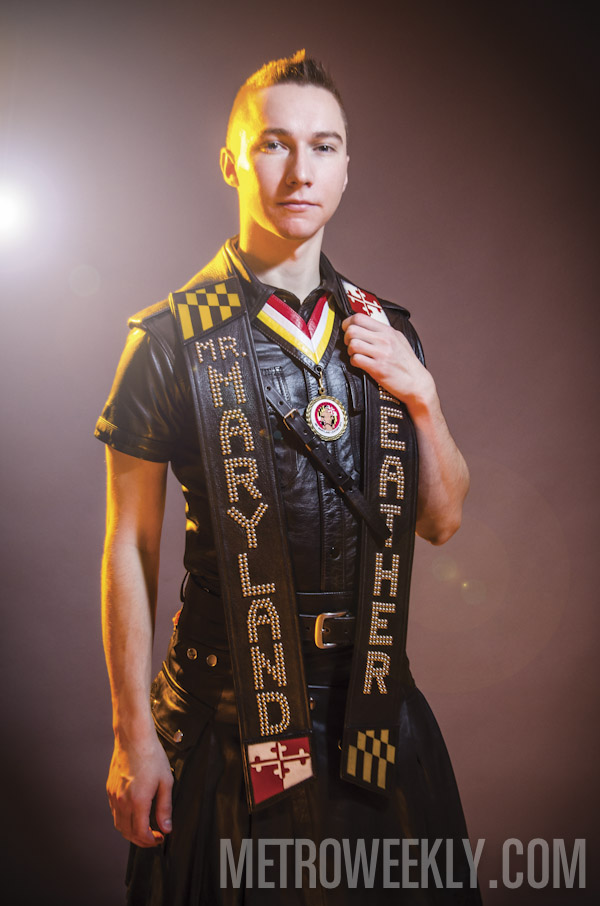 “It’s unfortunate I’m missing MAL,” sighs Peter. “I really wish I wasn’t.” The reason? The recently christened Mr. Maryland Leather has a commitment in New York associated with his work as a composer. While his Command MC brothers are fully understanding, he’s sorry to be missing one of the nation’s largest, oldest leather events — one he’s yet to attend. “It’s definitely an anxiety for me, that I’ve either disappointed people or actively upset them. I really want to make people proud, and I want to do positive things.”

As far as the pup side of Peter, who sports an orange hanky in his right back pocket (anything goes), the role play provides his life in leather “an element of whimsy — even though the origins of pup play are in humiliation.” It originated as a form of submissive punishment (“mitts for paws so you can’t use your hands, can’t verbalize, it’s taking away all of these agencies”), but Peter feels it’s evolved into something far more spirited, noting “the newer form of pup play, in my mind, is playful. It’s more about getting in touch with your animal instincts.”

What’s on your nightstand?
A Himalayan salt lamp — it gives off a beautiful warm glow and makes anyone look good in bed — and my external hard drive.

What might we find in there?
Condoms, lube, tail plugs, a few bondage things like tape and rope. 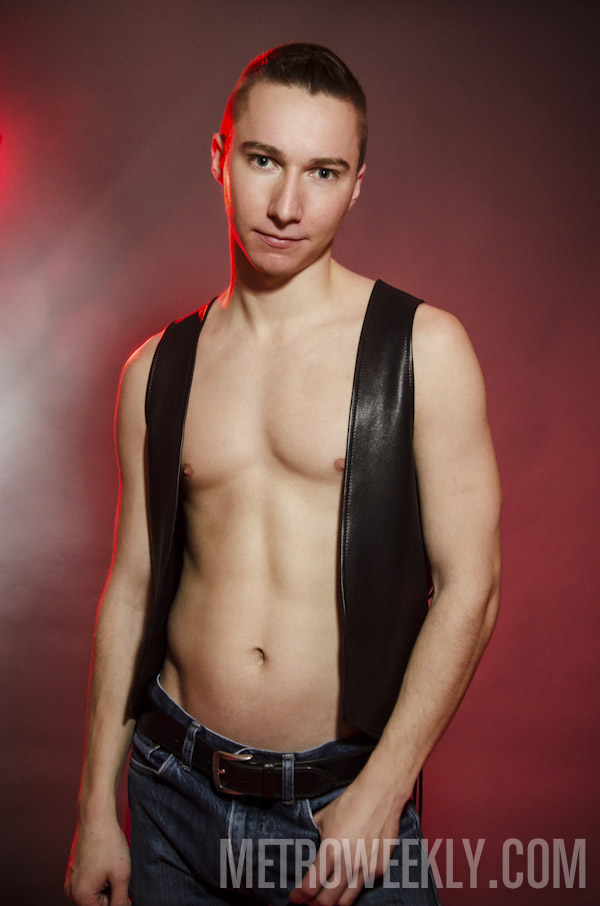 Are you a night owl or an early riser?
Early riser.

What’s the last thing you bought?
Dinner at the English Ivy in Indiana.

If you could have any superpower, what would it be?
To be able to use power tools. I consider that a superpower. I am terrible with my hands, but good with my fingers. I’m the definition of unskilled labor. 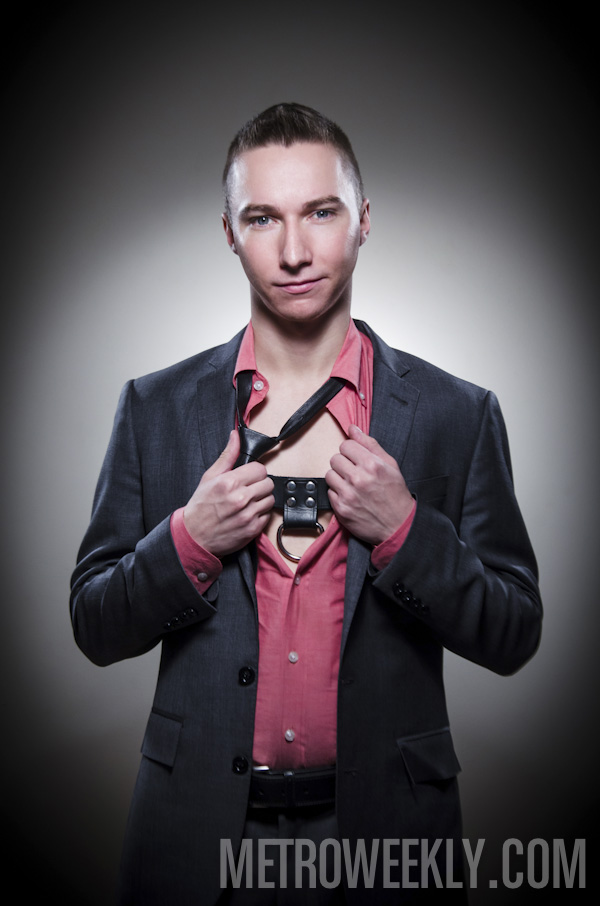 What did you last binge watch?
I love things with H. Jon Benjamin, so Bob’s Burgers and Archer are kind of my background radio while I’m doing dishes or cooking. I love his voice and I love the wit of those two shows.

Who was your first celebrity crush?
If we’re talking about very first, Mowgli from The Jungle Book. I really liked that red underwear. I’ve always had a thing for underwear.

What are your three favorite night spots?
Rock Bar in New York City — I’ve always had a great time there. The DC Eagle is great. And Grand Central, in Baltimore. I’ve got an event there on Friday the 20th.

Inauguration Day.
I’m figuring people will want to not watch the TV, get out of their houses and maybe drink a little bit or find someone to have a good time with to take their mind off of things.

What’s your drink of choice?
I’m easy. I’ll usually take a vodka tonic or whiskey on the rocks. 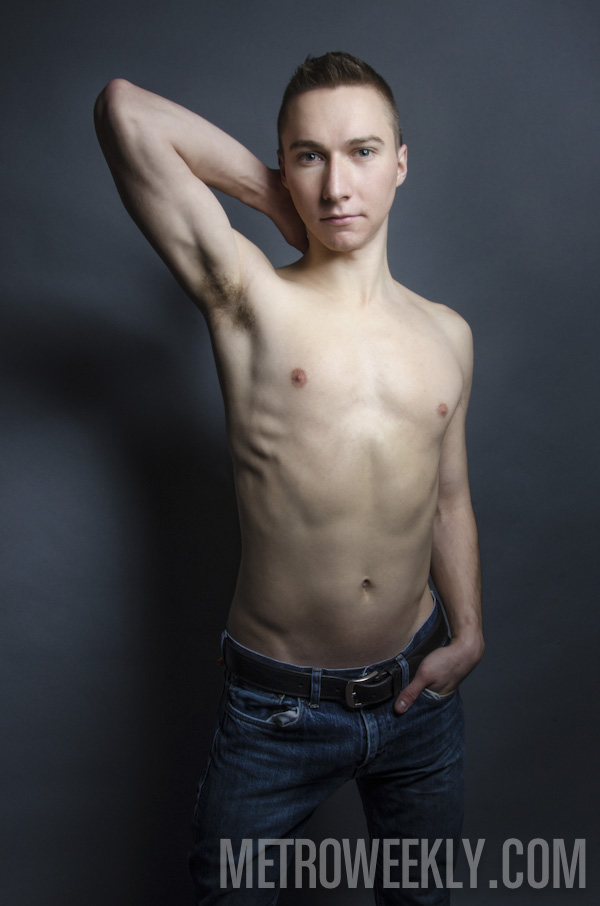 Pick three people living or dead that you would like to have a drink with.
Stephen Fry, Hugh Laurie, and Graham Chapman from Monty Python’s Flying Circus.

What’s your pet peeve?
“Definitely” spelled with an a.

What’s your favorite food?
There are some foods that I can’t stop eating once I’ve started, like ginger snaps. I have no self-control when it comes to them.

What animal would you be?
I’d be a dog. One of the happy breeds, like Labs. Humans love and take care of them.

Boxers, briefs, or other?
Jock straps.

What’s your biggest turn-on?
Pit smell is a big thing for me. 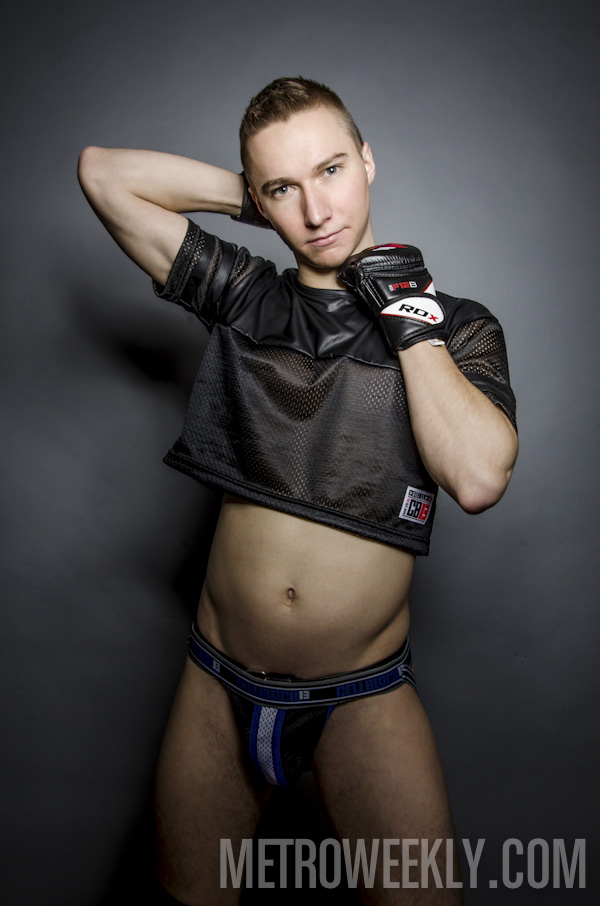 Someone who doesn’t honor consent.

Describe your dream guy.
I like guys along the age and body type spectrum. It’s more the personality. A similar adventurousness, open-mindedness, who usually has a lot of kinks going on as well, so that there’s a big palate of interesting things to draw from.

Define good in bed. That’s a fun one.
I usually want a memorable experience. Something I’d want to tell my close friends about, because joy should be shared.

What’s the most unusual place you’ve ever had sex?
I’ve had a lot of sex outdoors. By a river, in a lake, behind hay bales.

What’s the most memorable pick up line you’ve ever heard?
I haven’t heard that many memorable ones honestly. The thing about pick-up lines is that they’re either sort of ironically funny, like, “If I said you had a beautiful body would you hold it against me?” or they’re just bad. If I say I’m a composer or an artist, I’ll sometimes get, “You’re so talented,” and, of course, they haven’t heard any of my music. So how could they know from anyone else how good I am?

What’s your favorite make-out music?
I like deep house. That whole genre is good for that. But honestly, I don’t need music. I like the sounds of two — or more — bodies. 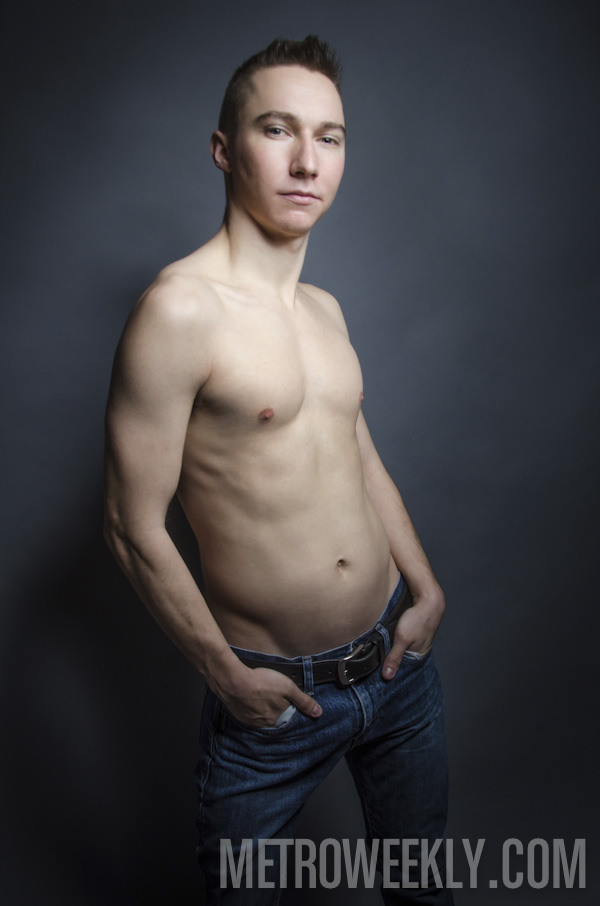 I’d love to go back to Japan. I got to go there in 2013 and visit a friend, and it was just mind-blowingly beautiful.

Marvel or DC?
Not a comic person.

Which of these daddies would you want to get a spanking from? George Clooney, Hugh Jackman, or Tom Selleck.
I saw Tom Selleck in a previous one, and I was hoping he would still be there. 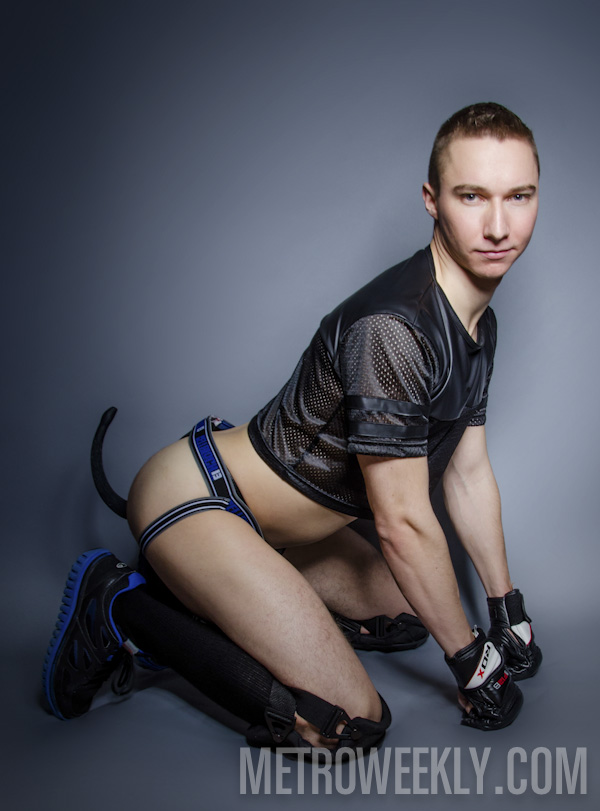 Tom Selleck now, or Tom Selleck back in Magnum PI days?
Magnum PI days, and I’d want him to kiss my ass after he spanked me so that the bristles of the mustache activated all of those tender nerve endings.

I’m sure Tom Selleck would be happy to do that.
I would hope so.

What’s your greatest fear?
It sounds dumb to say dying, but it’s more that there will be still so many wonderful things or beautiful things that I haven’t seen or experienced before I go.

Does size really matter?
Size always is a factor. It’s not the only thing that matters. It’s not like bigger is better. Regardless of size, it’s how you use it.

What era, apart from now, do you think you belong in?
The beginning of the 20th century, like 1890 to 1920-ish. All my favorite composers are from then. Paris at that time was exploding with art and poetry and music. It’s like Stephen Fry says in one of his sketches, “When the world was in uproar and to a young man everything seemed possible.”

How are you feeling about soon to be President Donald Trump?
His past behavior does not dignify the seat of the presidency. I’m afraid for many people because of his presidency and the political agenda that seems to be coming with it.

Are we obligated to respect him as president?
We are obligated to hold him to the standard that has been established for the presidency. When he falls beneath that, he should be held accountable.

What would you like to be remembered for?
For making others feel welcome and a part of things.

What are you most grateful for?
My family. The support that they’ve had for me along every step of my life, really. 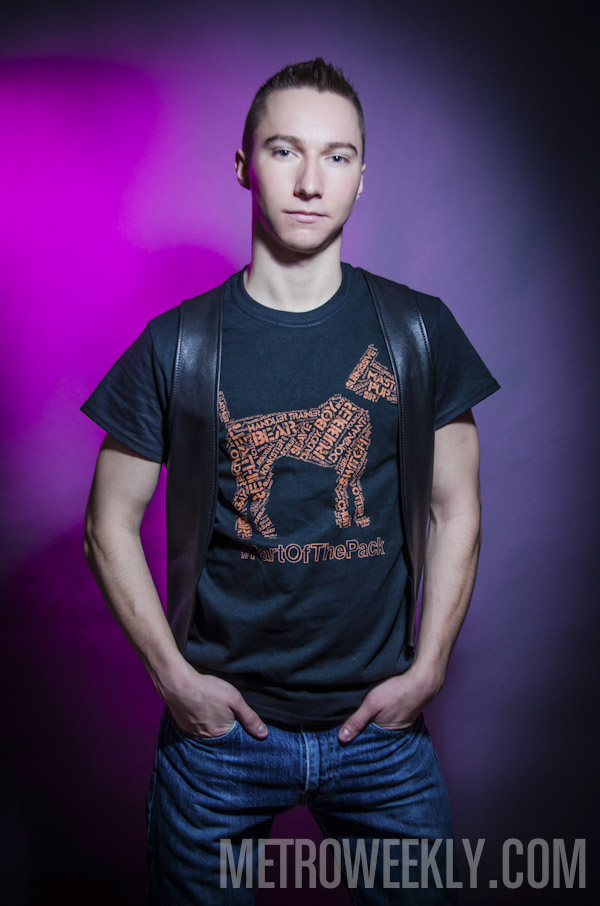 Would you rather live longer or be wealthier?
Live longer. I’d hope to be dynamic and active throughout the rest of my life as much as my physical and mental capabilities permit.

What inspires you to be a better person?
My leather club brothers. Their empathy, their work in the community.

What is your philosophy of life?
Be open, be thoughtful, be forgiving.

We’re seeking Coverboy candidates for 2017. If you live in the D.C. metro area and are over 18, apply at metroweekly.com/coverboyapp.

Randy Shulman is Metro Weekly's Publisher and Editor-in-Chief. He can be reached at rshulman@metroweekly.com.
← Previous Story Announcing the three Coverboy of the Year finalists and their prize packages!
Next Story → Nightlife Coverboy: Nic