Home / News + Politics / From the Editor / Editorial: Sign of Hope

The Women's March on Washington was a galvanizing moment in a new, burgeoning resistance

By Randy Shulman on January 26, 2017 @RandyShulman 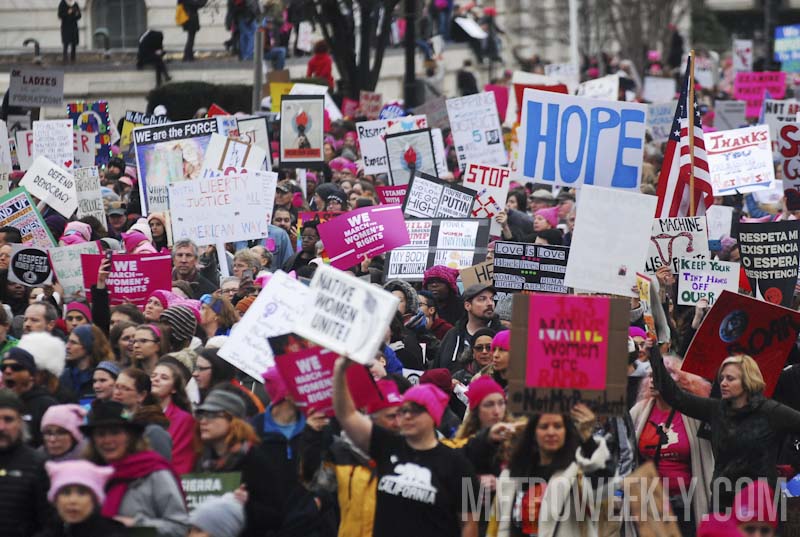 As I sifted through the 3,000 photographs taken by Ward Morrison of those who attended Saturday’s historic, ground-swelling Women’s March on Washington, one picket sign kept catching my eye. It expressed a sentiment in a one large, blue, hand-painted word: Hope.

The sign, which stood out for its simplicity and inexplicable feeling of warmth, fittingly encapsulated the feeling this remarkable, magnificent event generated among its half-million participants. The march gave shell-shocked people a place to gather their discontent and fire up the rallying cry — loud and clear — against an incoming administration that may be as dangerous to our country as we feared.

It’s an administration that, while it may do some good, more than likely means us harm. Harm to the LGBTQ community. Harm to hard-working immigrants who arrive on our shores seeking the American Dream. Harm to our relationships with our global allies, both near and far. Harm to a woman’s right to choose. Harm to health care. Harm to the planet and the countless species we share it with.

When Donald Trump, in his alarmingly dark, jingoistic inaugural speech, said it was time to put “America first,” he was ignoring the fact that we all share this world together, that many of us seek common solutions for common good. Yes, there are those who would obliterate the good in the name of their own beliefs and we must be aggressive in our approach to dealing with those factions. But shutting out the world is not the answer. And how can we trust a president whose advisors tout “alternative facts,” who won’t release his taxes, who won’t divest himself of potential conflicts because “I’m president and I don’t have to”? The administration of Donald J. Trump will not be known for hope. Rather, it will be known for the “carnage” it will inflict upon American policies and social advancements that have come so far over the past eight years.

Scene: View our 327 photos from The Women’s March on Washington

Every time Trump uttered the word patriot in his unsettling speech, it was impossible not to replace it with the term “White Supremacist.” If there is “carnage” in Donald Trump’s America, it lies within the dark hearts of those who are bigoted, those who hate without reason, who would have LGBTQ people stripped of their rights, including the right to get married, the right to a workplace free of discrimination, the right to use a bathroom that corresponds with their true gender.

The administration has already made its intentions clear on so many fronts. And while it’s been silent so far on LGBTQ issues, the brusque, immediate removal of any mention of LGBTQ on the White House website and of John Kerry’s recent historic apology to State Department employees for enduring years of discrimination reveals where their true sentiments toward us lie. It’s fine. There’s no closet big enough in which to hold us all. You can try to erase progress, but you can’t stop it once it’s moved as far as it has. Setbacks are merely part of the greater push forward. “Good did not win this election,” said Madonna in her speech at the march. “But good will win in the end.”

The next four years are going to be a fight, perhaps the biggest of our lifetimes. That’s good for us, because the one thing the LGBTQ community knows how to do well is fight — fight hard, fight tirelessly, fight not just for our causes, but for causes shared by all. Our mantra has never been “LGBTQ first.”

As you sift through the pages of march photos in this issue — and 327 online in Metro Weekly’s Scene section — remember that even if you weren’t there, you can make a difference in the days, weeks, years to come.

All you need is hope.

Read: Women’s March on Washington: “Welcome to the revolution of love”

Randy Shulman is Metro Weekly's Publisher and Editor-in-Chief. He can be reached at rshulman@metroweekly.com.
← Previous Story Hell to the Chief: Don’t celebrate Trump, but don’t ignore him either
Next Story → From the Editor: Basking in Moonlight