Home / News + Politics / From the Editor / Hell to the Chief: Don’t celebrate Trump, but don’t ignore him either

Hell to the Chief: Don’t celebrate Trump, but don’t ignore him either

How do you celebrate the Inauguration of Donald Trump? By ensuring our voices are heard, loud and strong.

By Randy Shulman on January 19, 2017 @RandyShulman 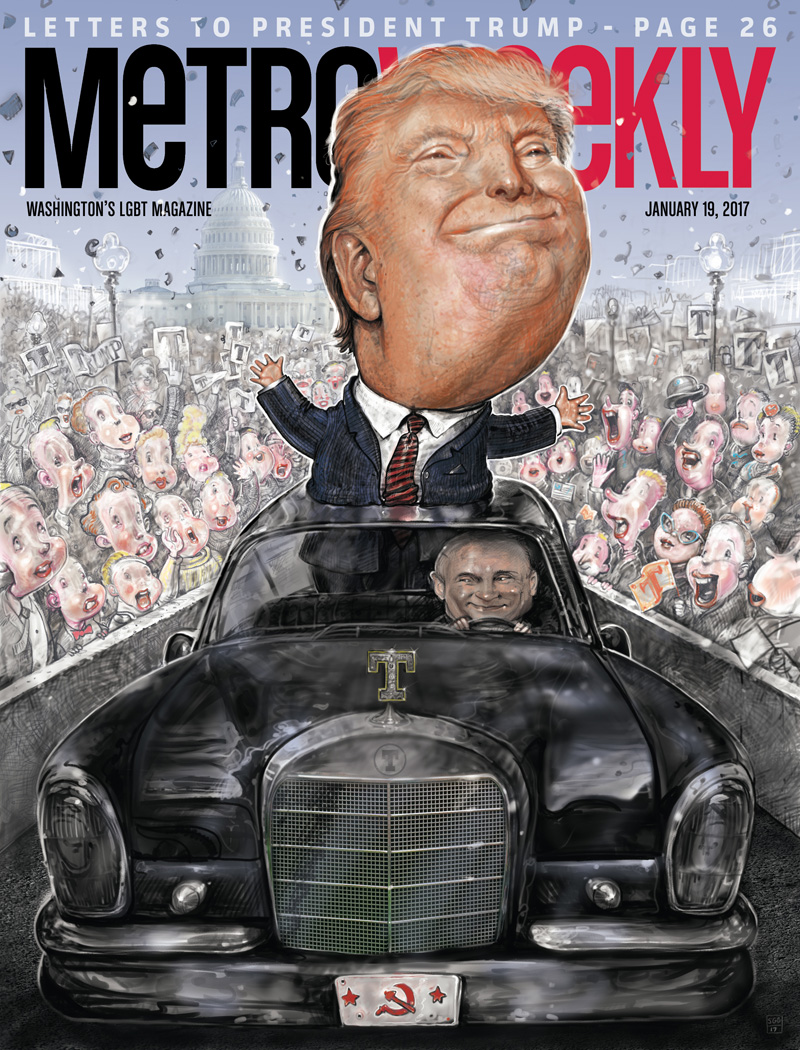 Inauguration Weekend should be a time of celebration.

But how do you celebrate an incoming president who has the temperament of a schoolyard bully, with skin thinner than a tomato, who tweets derisively at anyone and everyone, including celebrities and civil rights leaders?

How do you celebrate an incoming administration that appears eager to disrupt, dismantle and disregard every shred of progress America has made over decades, not merely in the area of LGBT rights but in all realms of life, from climate change to health care?

How do you celebrate a leader who clearly values self-interest above all else, who won’t apologize or accept blame, and shows no interest in repairing a nation he helped fracture with hateful, bigoted rhetoric.

How do you celebrate a leader who appears to have more regard for the Russians than his own government?

You don’t. Nor, however, do you ignore it.

The next four years have taken on a significance unlike any other in modern history. And not just for the LGBT community, but for all Americans, including the supporters of Trump who might find their self-delusion dissipating faster than the froth on a cappuccino. I would love to be proven wrong — Donald J. Trump could turn out to be a considered, thoughtful leader — but I doubt it. And so do many others.

For this issue, I asked both local and national members of the LGBT community — and a few allies — to express their feelings about the incoming president in letter form. The 32 responses were as varied in their sentiments as they were in their approach — one person even wrote his in the form of verse.

It’s doubtful Trump will ever read any of them, but I wish he would. He might learn something. Some are angry, some are bitter, some are fearful, and rightfully so. But others offer the incoming president cautious guidance and advice that he would do well to heed. Only Trump can prove us wrong. But were he truly serious about accepting the highest office in our land, he would have revealed his tax returns or, at the very least, divested himself fully of his company. A very greedy bird has just landed in the ultimate controlling perch, the valiant eagle replaced by a vulture.

I’ve lived in Washington through the administrations of Ford, Carter, Reagan, Bush One, Clinton, Bush Two and, of course, Obama. I had hoped to live through a second Clinton administration, and not a shred of doubt remains in my mind that Hillary would have made an amazing, historic, healing president, one who wouldn’t take such obvious glee in tearing apart an already ruptured country.

Hillary may not have been able to instantly heal all of America’s wounds, but she would have made an immediate effort, which is more than Trump and his merry band, including Kellyanne Conway, Reince Priebus, Sean Spicer and Mike Pence, all masters of delusion and spin-filled distraction, have done. Their argument — their rationale — is merely that they won. The rest of us need to get over losing. As for the media, we’re all fake news, we’re all crooked. Unless your name is Rush. Or Laura. Or Breitbart.

There is an antidote to this reality TV virus called Trump: Democracy. And if it works, everything will (eventually) turn out okay. Because real Americans don’t cower or kowtow. Real Americans emblazon their words of protest with meaning, purpose and resolve. Real Americans believe in the greater good, and not just the one percent.

The next four years are going to see Democracy enter a battlefield the likes of which will test it to its fullest extent. It will be, at times, hell.

But if it’s hell that Trump wants, then it’s hell Trump will get.

Randy Shulman is Metro Weekly's Publisher and Editor-in-Chief. He can be reached at rshulman@metroweekly.com.
← Previous Story No Returns: With Trump, America Made a Bad Choice
Next Story → Editorial: Sign of Hope