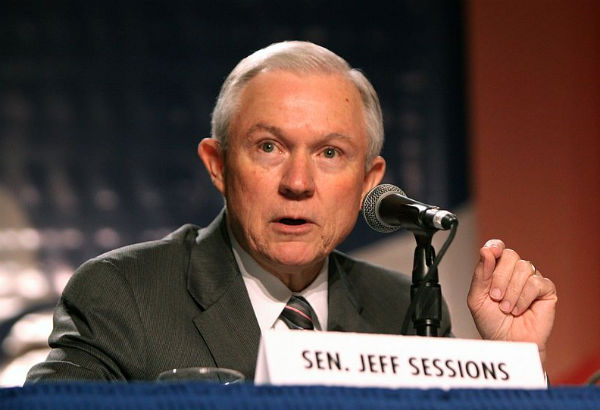 Sen. Jeff Sessions, (R-Ala.) President Donald Trump’s nominee for Attorney General, has offered a glimpse at how the Department of Justice might enforce existing laws related to LGBT rights should Sessions be confirmed.

Sen. Al Franken (D-Minn.), who sits on the Senate Judiciary Committee, sent the AG nominee a questionnaire in which he asked multiple questions probing Sessions’ views on LGBT rights, including the Alabama senator’s support for what Franken calls the “deceptively named” First Amendment Defense Act.

Following Donald Trump’s election, Sens. Mike Lee (R-Utah) and Ted Cruz (R-Texas) promised to reintroduce FADA, which is intended, primarily, to allow individuals — defined broadly to also include religious organizations, churches and even certain corporations — to discriminate against LGBT people if they have religious or moral objections to homosexuality, same-sex marriage, or LGBT rights. A version of FADA was introduced last year, but failed after conservative interest groups pulled their support over a broadly-written amendment that could have allowed discrimination against heterosexual couples. Although a new version of FADA has not been introduced yet during this congressional session, it remains a priority of many social conservatives. On the campaign trail, Trump promised to sign such an act into law should Congress approve it — a promise that remains on his campaign website.

“Some have argued that FADA is necessary to protect pastors, ministers and churches who fear that they’ll be forced to marry gay and lesbian couples,” Franken writes in his questionnaire to Sessions. “But the First Amendment already prevents clergy or churches from being forced to marry a couple if doing so is contrary to their beliefs. It always has. The Supreme Court’s decision in Obergefell v. Hodges, which recognized that same-sex couples have the right to marry in all 50 states, did not change that.

“Why do you believe that a bill like FADA is necessary? And how do you reconcile your support for FADA, which would sanction discrimination against lawfully married gay and lesbian couples, with your claim to ‘understand the demands for justice and fairness made by the LGBT community?'”

Taking issue with Franken’s contention that FADA is “deceptively named,” Sessions responds: “During the oral argument in Obergefell, Justice Alito asked former Solicitor General Donald Verrilli whether a private university or college could lose its tax-exempt status if it opposed same-sex marriage. General Verrilli responded: ‘It’s certainly going to be an issue. I don’t deny that.’ Thus, the purpose of the legislation was to prohibit the federal government from taking discriminatory actions against any person based on their belief or action in accordance with a religious or moral conviction.

“I supported this legislation because I believe that we can, and should, protect the rights of all citizens — including LGBT individuals and those with traditional views of marriage,” adds Sessions. “I do not see freedom as a zero-sum game. I understand the critical and historic role of Department of Justice in upholding our nation’s civil rights laws. If I am fortunate enough to be confirmed as Attorney General, I will enforce those laws to the letter.”

Sessions promises that the Department of Justice’s Civil Rights Division will continue to defend the civil rights of all Americans, particularly the most vulnerable, should he be confirmed. In response to a question from Franken regarding past statements refusing to acknowledge the threat posed to the LGBT community by hate crimes, and his opposition to the LGBT-inclusive Matthew Shepard and James Byrd, Jr. Hate Crimes Prevention Act of 2009, Sessions insists that he was simply working “based on information available to me at the time,” and promises to “work diligently to ensure that all Americans receive equal protection under our laws.”

Sessions dodges the issue of hate crimes that go underreported, vowing only to “learn more about this issue” while refusing to lobby for changes to federal law that would require state and local law enforcement to report hate crime incidents to the FBI. He also explains his past opposition to reauthorizing the Runaway and Homeless Youth Act by saying: “I was concerned with what I believed to be overly broad and vague language in the bill that could have discriminated against faith-based organizations that help form the fabric of the United States’s social services, and would have undermined the goal of the bill by making it more difficult to protect and provide services for at-risk individuals.”