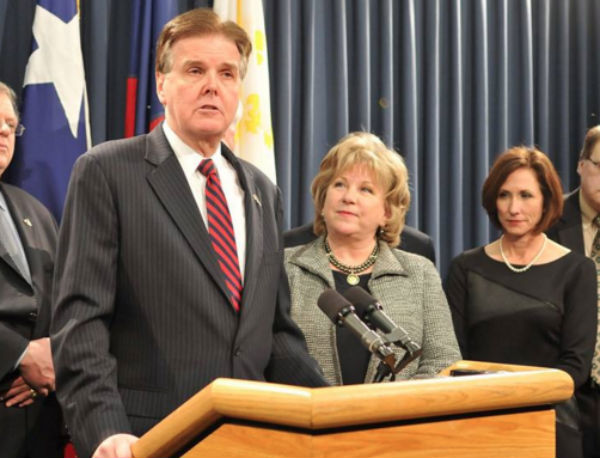 Texas Lt. Gov. Dan Patrick is pushing for a North Carolina-style bill dictating transgender people’s access to restrooms, despite being warned about the economic impact.

Working with State Sen. Lois Kolkhorst (R-Brenham), Patrick has made the bill one of his top priorities for this year’s upcoming legislative session.

Dubbing the bathroom bill the Orwellian-sounding “Texas Privacy Act,” he has insisted that it is needed to protect men from going into women’s restrooms.

In a defiant press conference at the state Capitol in Austin on Thursday afternoon, Patrick, quoting Martin Luther King, Jr., said “Our lives begin to end the day we become silent on things that matter.”

“The people of Texas elected us to stand up for common sense, common decency, and public safety,” he continued. “You can mark today as the day that Texas is drawing a line in the sand and saying, ‘No.’ The privacy and safety of Texans is our first priority, not political correctness. We will not respond to threats from the left-wing national groups that are demanding policies that make no sense and that Texans do not support.”

The bill would prohibit local governments from passing nondiscrimination ordinances that would prevent private businesses from setting their own restroom policies, and from denying government contracts to businesses that choose to mandate customers or employees to use only the bathroom that corresponds to their biological sex.

At a press conference, Kolkhorst said that government buildings and schools would have to require people to use facilities that correspond to their biological sex, though she did not elaborate on how that would apply to transgender people who have had gender confirmation surgery and who have had their birth certificate changed to reflect their gender identity.

There are exceptions to the “biological sex only” rule for custodial staff, emergency responders, and those assisting minors or disabled people with restroom use.

There is also an exception for instances where a government entity, such as a convention center, stadium, or other venue is leased to a convention or private business for a particular event, in which case the individual business or organization’s policies temporarily apply.

School districts will still be able to make accommodations — such as the use of single-stall restrooms or curtains for changing areas — for transgender students who request additional privacy measures, as they have previously done, Kolkhorst said.

The bill allows any individual who feels uncomfortable sharing a space with a transgender individual, or believes that a government entity or school is violating the law, to report their concerns to the attorney general, who can asses civil penalties against the locality or school district.

Lastly, the bill enhances the penalties for existing crimes by one degree if the crime, such as an assault, is committed in a public restroom, shower or changing facility.

At the press conference, Patrick accused left-wing groups and the press of spreading misinformation about the bill and of fear-mongering.

He expressly rejected the premise that the state would be punished in the same way as North Carolina was for passing its HB 2 law, which limits transgender people’s access to bathrooms.

Citing the defeat of the LGBT-inclusive HERO ordinance by voters in Houston in 2015, Patrick said that he was not aware of any businesses that refused to move to Houston because of the defeat of HERO, and even noted that the city is set to host this year’s Super Bowl.

Patrick also noted that North Carolina lawmakers have refused to repeal HB 2, in spite of the alleged negative economic impact that the bill has had on the state, pointing out that the state is still considered the second-best for business by Forbes magazine.

But a recent study commissioned by the conservative Texas Association of Business found that Texas could face up to an $8.5 billion decline in GDP and lose an estimated 185,000 jobs if a bill that was interpreted as targeting the LGBT community for discrimination were to pass.

Some business interests worry that such a bill would lead to similar cancellations of shows and conventions, the loss of sporting events, such as the NCAA tournament scheduled to be held in Dallas in 2018, and could even prompt some companies to scuttle relocation or expansion efforts in the Lone Star State.

“Discriminatory legislation is bad for business,” Chris Wallace, president of the Texas Association of Business, said in a statement pointing to the findings of the organization’s study. “We must ‘Keep Texas Open for Business.’ We cannot slam the door on the Texas Miracle of openness, competitiveness, economic opportunity and innovation.”

John Riley is the local news reporter for Metro Weekly. He can be reached at jriley@metroweekly.com
← Previous Story Historians move 2018 conference to Baltimore from Charlotte over HB 2
Next Story → New Jersey transgender man sues Catholic hospital for denying him a hysterectomy