By Doug Rule on February 9, 2017 @https://twitter.com/ruleonwriting 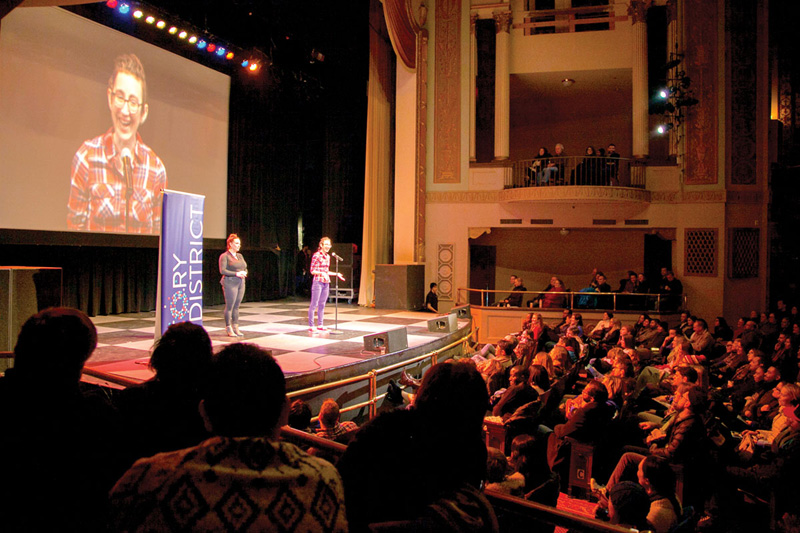 Stephanie Garibaldi has long thought of herself as “the Charlie Brown of Valentine’s Day.”

“[It] used to be my least favorite holiday in general,” Garibaldi says. “I thought it was very communist to order people to be romantic on a specific day. And it works against the nature of romance, which is inherently spontaneous. So I just thought, it’s no wonder that this never works out well. It was always a huge disappointment.”

Garibaldi’s disdain lasted until 2009, when she took matters into her own hands and produced Sucker for Love, an annual Valentine’s Day-themed showcase from Story District. “I was just tired of not having a date on Valentine’s Day, so I thought we’d do a show so I wouldn’t have to feel bad about that.”

As Story District’s director of education, Garibaldi works with Mike Baireuther to hand pick eight Sucker for Love storytellers. This year, two identify as LGBTQ, and few are professional performers or writers. “They have all kinds of different jobs,” Garibaldi says, “and we work to help them tell their story in the most compelling way.” Garibaldi and Baireuther coach each storyteller and direct them as a group in a series of rehearsals leading up to the big night at the Lincoln Theatre. “I won’t let anyone get up there [and] bomb or not do well,” she says. “That helps no one.” The goal is to whip the stories into a natural, not theatrical, shape, as if “your smartest, funniest friend were telling you a story.”

Garibaldi also coaches those who appear at Story District’s popular theme-driven monthly shows at Town Danceboutique, including the Worst Date Ever Contest, which takes place this year on Valentine’s Day. But Sucker for Love is a more involved, tightly organized show, one presenting a broader look at the entire spectrum of love. “We usually have at least a couple stories that end happily,” says Garibaldi, adding, “I always tell people, ‘If you’re having a really hard time with love, there will be at least somebody up on that stage who has it worse.’ So that kind of makes you feel better about your own.” –Doug Rule

Doug Rule covers the arts, theater, music, food, nightlife and culture as contributing editor for Metro Weekly.
← Previous Story Kate Bornstein speaks at Sixth & I
Next Story → David Frum on “How Trump Could Build an Autocracy”