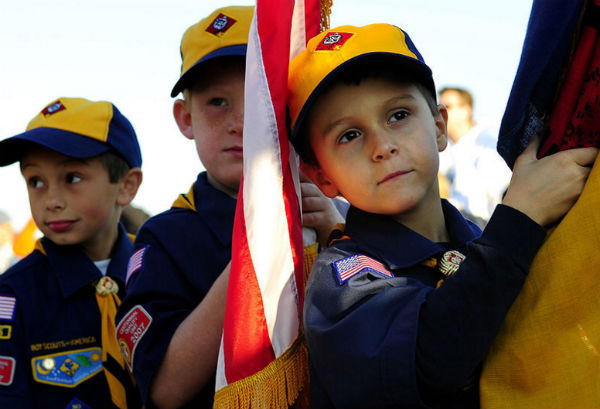 Joe Maldonado, an 8-year old transgender boy from Secaucus, New Jersey, has been invited to rejoin his Cub Scouts troop after being kicked out late last year.

The move comes after the Boy Scouts announced this week that they were officially changing their entry policies to allow transgender boys to participate in all-boy programs.

“For more than 100 years, the Boy Scouts of America, along with schools, youth sports and other youth organizations, have ultimately deferred to the information on an individual’s birth certificate to determine eligibility for our single-gender programs,” the organization said in a statement. “However, that approach is no longer sufficient as communities and state laws are interpreting gender identity differently, and these laws vary widely from state to state.”

Maldonado was ejected from his troop in December due to his gender identity, with Kristie apparently told by an official that other parents had complained about Joe’s participation in Cub Scouts.

“Not one of the kids said, ‘You don’t belong here,’” Kristie said at the time, blaming the parents who complained for creating problems where none existed.

“It made me mad,” Joe said. “I had a sad face, but I wasn’t crying. I’m way more angry than sad. My identity is a boy. If I was them, I would let every person in the world go in. It’s right to do.”

“I’m so grateful. I really am that they’re accepting and that there won’t be any issues. [Other transgender youth] won’t have to go through what my son went through,” she said. “It’s a big change for everybody that all are accepted now … I’m so delighted that they finally called and they did say this, but I’m still angry.”

Zach Wahls, co-founder of Scouts for Equality, called the Boy Scouts’ reversal in policy “an important step forward for this American institution” in a post on social media.

We are incredibly proud of Joe Maldonado — the transgender boy from New Jersey whose expulsion last year ignited this controversy — and his mother Kristie for their courage in doing what they knew was right,” he wrote. “We are also proud of the Boy Scouts for deciding to do the right thing.”

The Scouts lifted their ban on gay youth in 2013, with a ban on gay adult members lifted in 2015.

The Girl Scouts have accepted transgender members for some time — something bigots have long complained about.

Rhuaridh Marr is Metro Weekly's managing editor. He can be reached at rmarr@metroweekly.com.
← Previous Story Trump nominates Neil Gorsuch for Supreme Court
Next Story → Gay couple viciously attacked in Ohio: “I thought I was going to die”