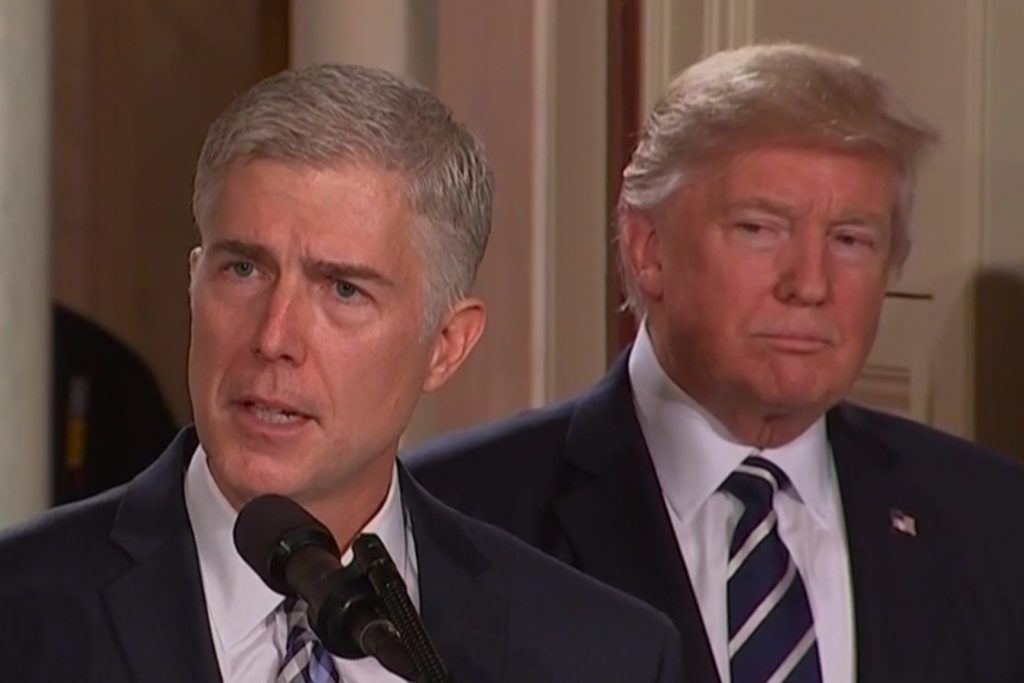 A coalition of LGBTQ advocacy organizations has come out in strong opposition to Neil Gorsuch, Donald Trump’s choice to replace the deceased Justice Antonin Scalia on the U.S. Supreme Court.

In a letter sent to Sen. Chuck Grassley (R-Iowa), the chairman of the Senate Judiciary Committee, and Ranking Member Dianne Feinstein (D-California), the groups outlined some of their concerns about Gorsuch, namely concerning his professed “originalist” approach to interpreting laws, which they note would completely discount LGBTQ people, as the Founders did not acknowledge differing sexual orientations at the time the Constitution was written.

“After a comprehensive review of Judge Gorsuch’s record, we have concluded that his views on civil rights issues are fundamentally at odds with the notion that LGBT people are entitled to equality, liberty, justice and dignity under the law,” reads the letter from the advocates, which was drafted and circulated by Lambda Legal.

“We wish to call to your attention the following aspects of Judge Gorsuch’s record and philosophy that are of particular concern to our organizations and our constituents, and that raise crucial questions of grave consequence to LGBT people, everyone living with HIV, and anyone who cares about these communities.”

The groups take issue with Gorsuch’s writings, including a book he penned on assisted suicide, which they argue reveal an “open hostility” to the idea of constitutionally protected fundamental rights beyond what is explicitly mentioned in the Bill of Rights. For instance, they say, it is likely that Gorsuch would refuse to recognize the right to privacy, the right to autonomy and self-determination, the right to parent, the right to engage in private consensual adult relationships, and the right to marry. All of those rights, though not explicitly mentioned in the Bill of Rights, have been essential to advancing LGBTQ equality.

“These are the rights that have been the lynchpin of our legal progress and that underlie the series of decisions — from Lawrence to Windsor to Obergefell — that have transformed the place of LGBT people in our society,” the letter reads. “Based on his extensive record, there can be no doubt that, had he been on the Court, Judge Gorsuch would have rejected each of these basic rights. Indeed, as discussed further below, he has been openly critical of same-sex couples for even seeking to vindicate their constitutional rights, including the right to marry, through litigation.”

Another point of contention is the question of Gorsuch’s decision in the Hobby Lobby case, where the Supreme Court decided an employer’s religious objections trumped their employees, and thus, employers were not required to provide insurance coverage for contraception due to Hobby Lobby’s “pro-life” views. The LGBTQ advocates note this is even a more extreme belief than that held by Scalia.

“In Employment Division v. Smith, Justice Scalia wrote that the First Amendment has never given individuals a right to opt out of laws that, in their view, burden their exercise of religion. Yet, in his 10th Circuit decision in Hobby Lobby, Judge Gorsuch insisted instead that any individual should be able to opt out of any law that, in that person’s view, makes them ‘complicit’ in conduct of another considered to be immoral, regardless of how compelling the state’s interest in enforcing the law,” the letter reads.

“The Committee should interrogate Judge Gorsuch on his position in this area, as his views on ‘religious complicity’ go well beyond anything that currently exists in American jurisprudence. For example:

“The American people are entitled to know more about Judge Gorsuch’s views on these subjects, so that they can understand how his approach could potentially impact their rights and their daily interactions with employers, physicians, and other service providers.”

The advocates also question whether science would play a role in Gorsuch’s interpretation of law, such as whether denying a transgender inmate medically necessary care makes them suffer “irreparable harm,” or whether the latest knowledge about HIV transmission would be taken into account in cases where outdated state laws on disclosure of one’s HIV status are being challenged. In either case, as well as several other examples, LGBTQ people could be negatively impacted if Gorsuch discounted science and only applied a strict “originalist” approach when making decisions.

“We urge the Committee to demand complete answers from Judge Gorsuch to the important questions that we and others have raised,” the advocates concluded. “Only by insisting that Judge Gorsuch answer these questions will the Committee fulfill its responsibility to the American people, and reveal the extent to which his nomination jeopardizes rights and liberties that many Americans believe are secure.”