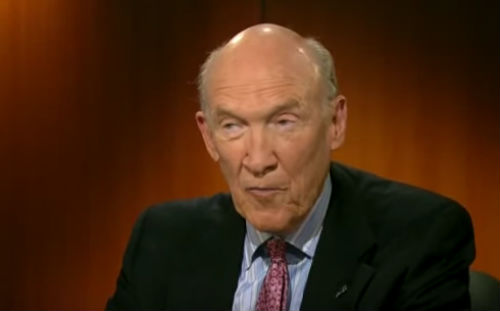 A former Republican senator has taken to the op-ed page of The New York Times to plead with President Donald Trump not to sign a “religious liberty” executive order that would allow people to discriminate against LGBTQ people, women and religious minorities based on their purported religious beliefs.

As a presidential candidate last year, Trump had promised religious conservatives that he would sign an executive order that establishes their right to refuse to participate in or facilitate actions or behaviors — such as same-sex marriage — toward which they hold moral objections. Earlier this year, a copy of a draft “religious liberty” executive order was leaked to the press, prompting a backlash against some of the order’s provisions.

Still, at the recent Conservative Political Action Conference in Washington, Ken Blackwell of the Family Research Council, who served as domestic policy adviser to the Trump transition team, said that the White House is redrafting a proposed religious liberty order, which will eventually be signed into law by Trump.

While some have dismissed the idea that Trump would sign any anti-LGBTQ order into law, former Sen. Alan Simpson has decided not to take a risk, writing an open letter to the president urging him not to follow through with what Blackwell claims the administration is promising religious conservatives.

“I wish it were as simple as pointing out that supporting discrimination against anyone is just a bad idea and that doing so in the name of religion is hypocritical as well. But just for good measure, I’ll offer a few more reasons,” Simpson writes in the Times. “The prospective executive order would authorize wide-ranging, taxpayer-funded discrimination against women, gays and members of minority faiths across federal programs and services. For example, a Social Security Administration employee could cite his religious beliefs to refuse benefits to the surviving spouse of a married same-sex couple.”

Simpson points out that the idea of religious exemptions is generally unpopular, receiving only 30 percent support in a poll by the Public Religion Research Institute. He also points to the backlash that states like Indiana and North Carolina have received after passing laws that were widely perceived as hostile to the LGBTQ community. Simpson then notes that the unpopularity of such measures could end up sinking the GOP in the long term by permanently typecasting Republicans as anti-LGBTQ and bolstering the Democratic Party. Lastly, he notes, such an executive order could be grounds for a lawsuit and could potentially be overturned by the courts.

“If you still aren’t concerned about dragging the entire party into another swamp of political quicksand, then let’s focus on what you do care about: the art of the deal,” Simpson writes. “What would you get out of signing this executive order? You would placate a vocal minority that includes some certified hate groups and far-right activists who are truly out of step with most Americans and many Republicans across the country. What would the other side get — or in other words, what gifts will you be handing to Democrats and others on a silver platter? A great cause, new supporters, new energy and money, the mother’s milk of politics.”

Simpson concludes his editorial, writing: “I would respectfully suggest that you expend your time and energy on other issues — the solvency of Social Security, the cost of health care, humane immigration reform, building infrastructure and educating kids to succeed — that Republicans could leverage for broad support and for more praise for you and the party as it creeps closer to the midterm elections in 2018. Please consider this a little helpful advice, offered from one maverick Republican to another.”

Chad Griffin, the president of the Human Rights Campaign, responded to Simpson’s op-ed on Twitter, tweeting: “Wise advice from a former GOP Senator to @realDonaldTrump: There will be consequences for attacking #LGBTQ people.”

Wise advice from a former GOP Senator to @realDonaldTrump: There will be consequences for attacking #LGBTQ people. https://t.co/QcSdY8SW4E

“The freedom of religion is a core national value, and so is treating others the way you want to be treated,” Sejal Singh, the campaigns and communications manager at the Center for American Progress, said in response to Simpson’s op-ed. “That is why a majority of Americans, including many Republicans like former Senator Simpson, oppose religious exemptions measures that would allow people and businesses to turn away LGBT people and religious minorities simply because of who they love or who they worship.”