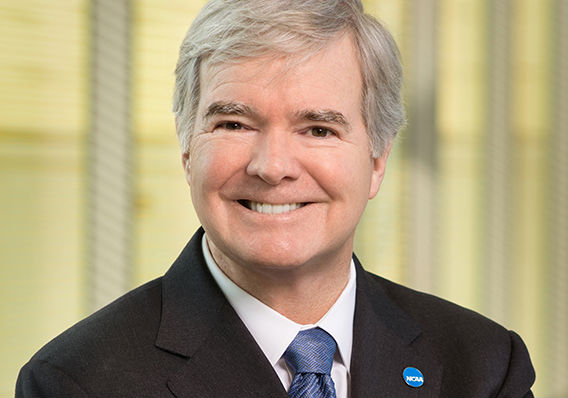 LGBTQ advocates and their progressive allies have a message for NCAA President Mark Emmert: Don’t be fooled by this so-called “repeal” of North Carolina’s HB 2 law.

On Thursday, with an NCAA-imposed deadline looming, lawmakers in the Tar Heel State removed the anti-LGBT law that restricted transgender bathroom access, capped the minimum wage in the state, and prohibited localities from passing LGBT-inclusive nondiscrimination ordinances from the books. But the legislation passed by North Carolina’s General Assembly prohibits any nearly any public or state entity from explicitly allowing transgender people to use facilities matching their gender identity, and places a 3 year, 8-month moratorium on LGBT-inclusive nondiscrimination ordinances that deal with employment or access to non-restroom public accommodations.

Following passage of the so-called “repeal,” Emmert held a press conference, during which he opened the door to the possibility of awarding NCAA sports championships to North Carolina, even though some of HB 2’s most problematic provisions remain in law.

When asked if he considered the bill a true repeal, Emmert responded: “Technically, obviously it is. They repealed a bill. HB 2 is gone and no longer the law of the land. We made clear that absent any change in the law we weren’t going back to North Carolina. They’ve changed the law.

“Now the question is…whether or not this new bill has changed the landscape sufficiently that the board’s comfortable in returning to North Carolina. Again, a place everybody likes to go. This isn’t about North Carolina not being a hospitable place for events. It is. But can we conduct them in a way that’s consistent with our values?”

Emmert’s comments also appeared to back away from the NCAA’s previously strong stance on not awarding championships to places with anti-LGBT laws, saying that the board will review the General Assembly’s actions, even though “the NCAA…does not consider itself an entity that has any business telling a state what their laws should be.”

“The fact that the board only identified one state that it didn’t want to go to, while recognizing there were 49 other states with various degrees of support or restrictions around LGBT rights and other civil rights issues, it certainly meant that they saw North Carolina as distinctive,” he added. “And the question that’s going to be before them: Is it now still so distinctive that we don’t want to go there? Or is it close enough to where everybody else is in the country that it makes sense to be there?”

But LGBTQ groups are incensed over the failure of their legislative allies not to demand a clean repeal of HB 2. And they’re now focusing their efforts on informing the NCAA — that the so-called “compromise” reached by North Carolina lawmakers is utterly unacceptable if the NCAA truly cares about LGBTQ equality.

“The reason for the rush was obvious — the NCAA is choosing locations for the next five years’ championship games this week, and it has indicated that it could not subject its players and its fans to the discrimination mandated by HB 2,” Mara Keisling, the executive director for the National Center for Transgender Equality. “Make no mistake: North Carolina still has state-sanctioned discrimination on the books. We call on the NCAA to stand firm and to continue to withhold championship games from North Carolina until the discriminatory anti-transgender law have been completely repealed.”

Keisling also blasted the underlying premise of both the original HB 2 measure and the provision that prevents anybody from passing laws regulating bathroom access that haven’t been vetted first by the General Assembly.

NCTE, along with the Human Rights Campaign, Equality NC, the Freedom Center for Social Justice and the North Carolina NAACP, cosigned a statement calling the “repeal” bill “shameful” and saying it does not resolve any of the issues that caused the NCAA to put North Carolina on notice in the first place.

“This bill is anti-worker, anti-access to the courts, and anti-LGBTQ. It violates all basic principles of diversity, inclusion and basic civil rights,” the joint statement reads. “Fundamentally, any moratorium on civil rights is not a compromise, it is a contradiction with the principle of equal protection under the law and our moral values.”

Rev. Dr. William Barber, the president of the North Carolina NAACP and member of the national NAACP board, said the provision placing a moratorium on local governments’ ability to pass their own ordinances governing discrimination in employment and public accommodations only takes power away from local officials whom voters had entrusted to represent their interests.

“This so-called compromise is not a repeal. It’s a Trojan horse,” Barber said. “It is a furtherance of discrimination. This is a bait-and-switch.

“Above all, any moratorium on civil rights is not a compromise,” Barber added. “It is a contradiction with the principle of equal protection under the laws, and our moral values.”

John Riley is the local news reporter for Metro Weekly. He can be reached at jriley@metroweekly.com
← Previous Story Cooper signs HB 2 “repeal” bill but anti-LGBT restrictions stay intact
Next Story → Tennessee anti-gay marriage and bathroom bills dead until next year