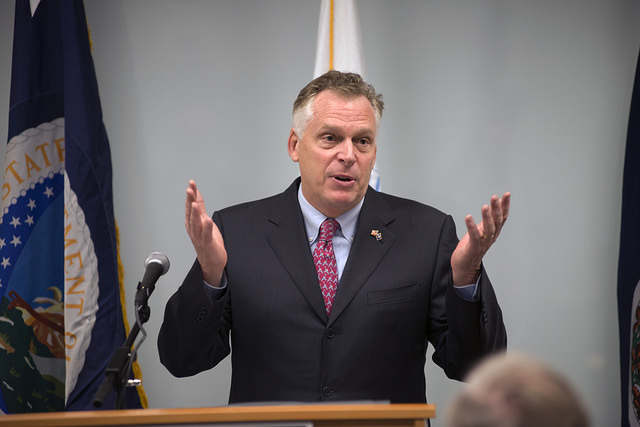 On Thursday, Virginia Gov. Terry McAuliffe (D) vetoed a pair of bills that would grant religious exemptions for those with religious objections to same-sex marriage. The bill would hamstring the government from imposing any penalty, fine, contract, or certification on a person who either refuses to solemnize, or provide services for, a same-sex wedding.

Republicans have insisted the bills are essential to preserving religious freedoms for people who object to homosexuality. But LGBTQ advocates say the measures are unnecessary, because ministers and others who already enjoy First Amendment protections that protect them from being “forced” to perform same-sex wedding ceremonies. They also object to the idea that a business that opens itself up to the public could be allowed to discriminate against LGBTQ people or same-sex couples.

“Although couched as a ‘religious freedom’ bill, this legislation is nothing more than an attempt to stigmatize,” McAuliffe said in a statement. “Any legitimate protections afforded by Senate Bill 1324 are duplicative of the First Amendment to the Constitution of the United States; Article I, Section 11 of the Constitution of Virginia; and the Virginia Religious Freedom Restoration Act.  Any additional protections are styled in a manner that prefers one religious viewpoint — that marriage can only validly exist between a man and a woman — over all other viewpoints.  Such a dynamic is not only unconstitutional, it equates to discrimination under the guise of religious freedom.”

The move does not come as a surprise: last year, McAuliffe vetoed a pair of nearly identical bills, something he referenced in this year’s veto message. Before the legislative session started, McAuliffe had promised to veto any bill that could be interpreted as hostile to LGBTQ rights, arguing that such bills are unpopular with the business community and can potentially stymie economic opportunity in the commonwealth.

“Businesses and job creators do not want to locate or do business in states that appear more concerned with demonizing people than with creating a strong business climate,” McAuliffe said, alluding to the economic backlash experienced by North Carolina in the wake of the passage of its infamous HB 2 law. “We need only look at the damage these types of laws are doing in other states to understand the harm this bill could bring to our Commonwealth and its economy. … Accordingly, I veto this bill.”

The bills now go back to the Republican-controlled legislature, where lawmakers will likely attempt to override McAuliffe’s veto. However, Democrats have enough members to block any override in both the House and the Senate, making the effort futile (though likely giving Republicans an issue to appeal to their base for November’s upcoming elections).

James Parrish, the executive director of Equality Virginia, applauded McAuliffe’s decision to keep his promise by vetoing the proposed bill.

“We recognize that religion is a vital part of many Virginians’ daily lives, but HB 2025 does not protect religious liberty,” Parrish said. “Instead, it provides a license to discriminate against loving LGBTQ families; furthermore, its broad and vague definition of ‘person’ would set a dangerous precedent for discriminatory individuals and groups to be protected by our religious freedom laws.”