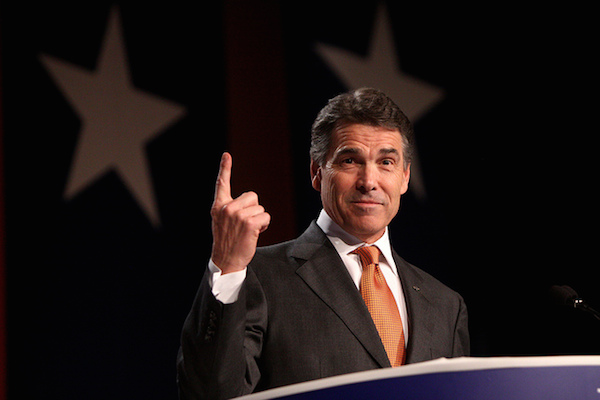 A Trump administration cabinet member has inserted himself into the middle of an ongoing dispute over a student election at Texas A&M University, publicly declaring that the election was stolen by the university’s openly gay student body president.

According to The Washington Post, U.S. Secretary of Energy Rick Perry, himself an alumnus of Texas A&M, has accused Bobby Brooks, an openly gay junior, of stealing the election and charged that university officials helped him do so in a “quest for diversity” by having his chief opponent disqualified. Perry, the first A&M alumnus to serve as governor of Texas from 2001 to 2015, wrote a lengthy op-ed expressing this belief and submitted it for publication in the Houston Chronicle.

The student whom Perry has accused Brooks and university officials of stealing the election from is Robert McIntosh, the son of a wealthy Republican fundraiser in Dallas who campaigned for President Trump during last year’s election. In Perry’s mind, the only way Brooks — who didn’t even campaign on his sexual orientation — could possibly have won was because university officials put their thumb on the scale with the intent of rigging the election results in the name of political correctness.

“When I first read that our student body had elected an openly gay man, Bobby Brooks, for president of the student body, I viewed it as a testament to the Aggie character,” Perry wrote. “I was proud of our students because the election appeared to demonstrate a commitment to treating every student equally, judging on character rather than on personal characteristics. Unfortunately, a closer review appears to prove the opposite; and the Aggie administration and SGA owe us answers.”

Texas A&M officials deny that there is any such conspiracy.

“Honestly, we were just surprised to see that the Secretary of Energy would take the time to weigh in in detail,” Amy Smith, the school’s senior vice president of marketing and communications, said in a statement to the Texas Tribune. Smith also noted that student government elections are run by the students, not administrators, and that Perry’s “understanding of the election rules of student body president elections doesn’t reflect the facts.”

McIntosh, the wealthy Republican donor’s son, came in first in the election, but was disqualified by the student election commissioner after accusations of voter intimidation surfaced, A&M’s student newspaper, The Battalion, reported.

A&M’s judicial court overturned McIntosh’s disqualification on the grounds of voter intimidation, saying there wasn’t enough evidence to sustain such a charge. But the court unanimously upheld an additional charge, that he failed to disclose financial information for glow sticks briefly featured in a campaign video. As a result, McIntosh remained disqualified, and Brooks, the second-place finisher, was named the winner.

“Brooks’ presidency is being treated as a victory for ‘diversity,'” Perry wrote in his screed. “It is difficult to escape the perception that this quest for ‘diversity’ is the real reason the election outcome was overturned. Does the principle of ‘diversity’ override and supersede all other values of our Aggie Honor Code?”

The Secretary also claimed that McIntosh’s disqualification would have not occurred if he were black, gay, or non-white, a charge to which Smith, the university’s spokeswoman, strenuously objected.

Cal Jillson, an expert on Texas politics and a political science professor at Southern Methodist University, told the Chronicle that the “extraordinary part” about Perry’s interference into the disputed election results is “that he took the time to do this when he should have so many bigger fish to fry in his current job.”

Sarah Kate Ellis, president of GLAAD, sent out a series of tweets blasting Perry and defending Brooks, writing: “It takes a lot of nerve for 67 year old @SecretaryPerry to bully a college junior for fairly winning an election.”

It takes a lot of nerve for 67 year old @SecretaryPerry to bully a college junior for fairly winning an election #TXLege https://t.co/Ulu2h0yqcW

As a mother who works daily to protect children, I am disgusted that a father like @SecretaryPerry would stoop this low. #TXLege

Some advice for @SecretaryPerry: Kids like Bobby Brooks are the future, and should be encouraged, not harassed. #TXLege

. @SecretaryPerry Here, we fixed your op-ed for you. #TXLege pic.twitter.com/BJP78lVU1g

What’s your favorite utterly embarrassing moment from @SecretaryPerry? Retweet this and tag him in your response! pic.twitter.com/rV9eSAbb9o

Perry has a long history of anti-LGBTQ animus. He opposed same-sex marriage and same-sex adoption as governor of Texas, as well as nondiscrimination legislation. He even refused to allow his state to process benefits for same-sex military couples who were stationed in Texas. Perry has compared homosexuality to alcoholism and supports conversion therapy, believing homosexuality to be behavior that can be altered or changed. He also supported Texas’ unconstitutional anti-sodomy laws, and proposed “religious freedom” legislation that would have allowed people with strong beliefs opposing homosexuality to refuse to provide goods or services to LGBTQ people.

Perry also famously tried to shore up his anti-gay bona fides in a campaign ad during his first run for the presidency in 2011, saying: “You don’t need to be in the pew every Sunday to know that there’s something wrong in this country when gays can serve openly in the military but our kids can’t openly celebrate Christmas or pray in school.”

John Riley is the local news reporter for Metro Weekly. He can be reached at jriley@metroweekly.com
← Previous Story Exclusive: Rep. Alan Lowenthal on why Congress must pass the Equality Act
Next Story → Trump appoints anti-transgender think tank director to HHS post