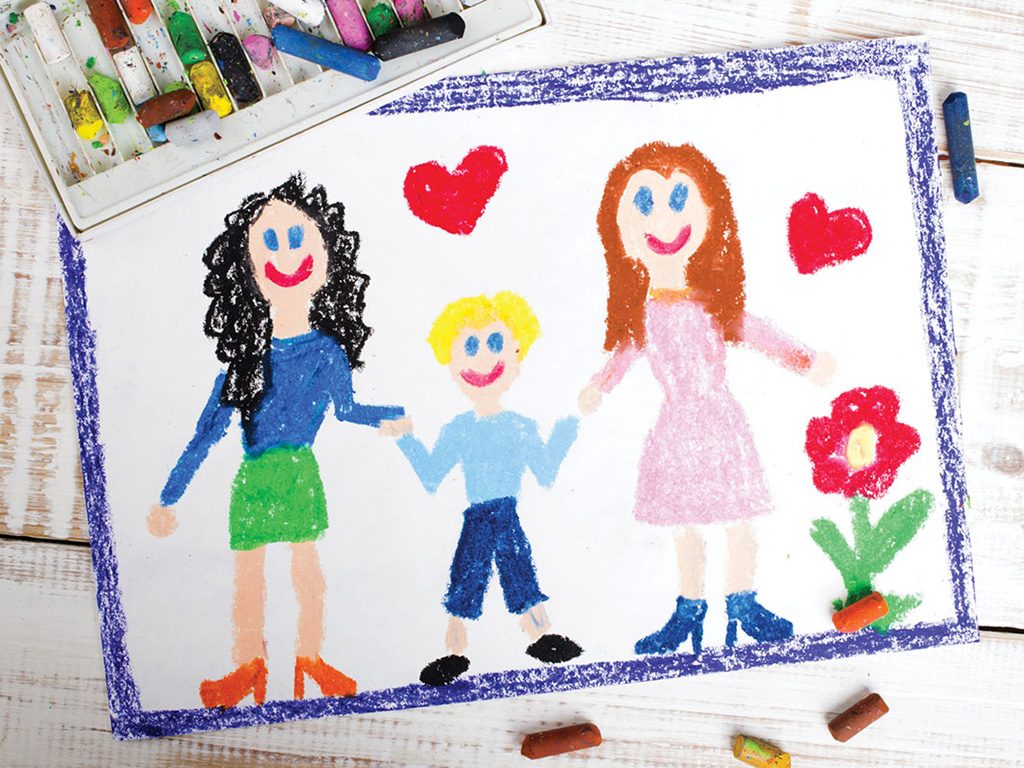 Melissa and Meredith Weiss learned how crucial birth certificates can be for same-sex parents during a vacation in Florida in 2011.

“My youngest was three, and fell and cracked his head on a lamppost,” Melissa recalls. “We had to take him to the emergency room for stitches, and the hospital would not allow us both in the back room with him.”

Even though the Weisses had obtained power of attorney for their children, had a court order recognizing them as the parents of their eldest son, and Meredith had gone through a second-parent adoption of their younger son, they had none of the paperwork with them when they left for vacation. As a result, they clashed with emergency room staff who couldn’t believe — or didn’t want to recognize — that two lesbians could be mothers of a child.

Unfortunately, that was not the only time the Weiss family found themselves on the receiving end of discrimination. Starting with the birth of their first son in 2006, their home state of North Carolina refused to list two same-sex parents on the birth certificate. Meredith, who donated the egg, was left on the certificate, but Melissa, who carried the child, was left off entirely.

“I carried my son in my body for nine months,” says Melissa. “I went through all the trials and tribulations of pregnancy, went through childbirth, ended up with a C-section, gave birth to this beautiful baby….

“His birth certificate came in the mail, and it didn’t have my name on it. I just burst into tears, uncontrollably sobbing. It produced so much anger and sadness in me at that point. It was frustrating to feel so hopeless, that we couldn’t do anything.”

Melissa and Meredith were advised not to pursue any legal action regarding the birth certificate, because at the time the courts in North Carolina were stacked with judges who would have ruled against same-sex parents. Additionally, both women feared they could lose the court order they had obtained that listed them as the mothers of their older son.

“Everyone we talked to said, ‘You’re not going to win. You’re going to lose everything, and you may even lose the court order,'” says Melissa.

Unfortunately, after the birth of their second son, a similar situation arose — except this time it was Meredith who was omitted from the birth certificate.

After North Carolina’s ban on same-sex marriage was overturned, the Weisses were advised to sue in order to have their sons’ birth certificates amended. They won, but the corrected birth certificates didn’t arrive until September of 2016, a month after the family had moved to Midlothian, Va.

The Weisses never experienced any discrimination while in North Carolina, yet they frequently worried that someone would question their parental rights whenever they had to prove their legal relationship with their children — whether it was for doctor’s visits, school registration, or sporting activities.

“Each time you have that experience, when you present a birth certificate, there’s always that stress of that person being in charge at that moment,” says Melissa. “They have power over you, and they can decide whether they’re going to accept all of this paperwork. We did not personally face discrimination, but there was always that fear that we would.”

Even after the family moved to Virginia, they had to go through an identical process to register their sons for school, because North Carolina took so long to mail the corrected birth certificates.

“We waited 10 years to get accurate birth certificates,” Melissa says. “But it also felt good, once we got them, to bring those to the school [in Virginia] so they could make copies, so it could never be questioned.”

The Weiss family’s experience is not unique. In recent years, same-sex couples from Iowa, South Carolina, Wisconsin and Arkansas have clashed with state officials over the exclusion of one parent from the birth certificate, despite the fact that same-sex marriage is legal nationwide. In the first three cases, the dispute was resolved successfully, but the Arkansas case is another matter entirely.

Three lesbian couples in Arkansas sued to have the non-biological parent listed on the birth certificate, and a lower court judge ruled in favor of the couples. But state officials appealed the ruling to the Arkansas Supreme Court, which overturned the decision and stated that Arkansas’ policy of omitting the non-biological same-sex mother reflected the state Health Department’s interest in recording biological lineage. Justice Josephine Linker Hart wrote that listing a same-sex couple on a birth certificate would fail to “acknowledge basic biological truths.”

As a result, the Arkansas decision has sounded alarm bells for LGBTQ advocates, who view the decision as an attempt to undermine the entire concept of marriage equality.

“I would place this case in a troubling minority, but nonetheless impactful, form of government and judicial resistance to treating same-sex married couples as truly married, and as people,” says Susan Sommer, associate legal director and director of constitutional litigation for Lambda Legal.

“There’s no rhyme or reason for why the Arkansas Supreme Court did what it did. This decision suggests a failure to apply Obergefell faithfully,” she adds, noting that federal courts have ruled in favor of same-sex couples in cases where the parents have both sought to be listed on their children’s birth certificates. She argues that the Arkansas Supreme Court’s logic is flawed.

One of the cases that was consolidated into the final Obergefell challenge to same-sex marriage bans was the Henry case out of Ohio, where the state refused to place a non-genetic same-sex parent on a child’s birth certificate. Obergefell required the state to grant same-sex couples the same benefits given to opposite-sex couples. Thus, if the state will extend the presumption of parentage to a non-biological father married to a biological mother, they must do the same for a non-biological lesbian mother.

Sommer, who worked with those Ohio couples whose lawsuits were rolled into the Obergefell case, says the lack of accurate birth certificates holds significant implications for same-sex couples. One lesbian mother took her son to the emergency room after he began wheezing and having trouble breathing. Upon arrival, she was forced to wait for an hour, her son still in distress, while the hospital tried to contact her wife, who, as the biological mother, was the only parent the hospital would recognize. Another couple, legally married in New York, adopted a child from Ohio, but were petrified of even traveling to the Buckeye State for fear that state authorities might take their child away because their marriage was not recognized under Ohio law.

“These things truly happen. This is real. And this is what Obergefell was supposed to eradicate,” says Sommer. “The Arkansas supreme court has allowed this to linger on. It’s important for the Supreme Court to take the case, nip this in the bud, fix it for people in Arkansas, and ensure that there is no confusion anywhere else.”

Two people who know the stress and complicated legal process of ensuring their family has legal rights are Jessamy and Chelsea Torres, of Madison, Wis. Together for seven years, married for five, they have a 2-year-old son, Asher, and are expecting a second child in May.

Even though same-sex marriage was legalized in Wisconsin prior to Chelsea’s pregnancy, the Torres family still encountered resistance from the state after Asher was born.

“[We] had hoped that with the legalization of marriage, the birth certificate issue wouldn’t be as much of a fight, but clearly that was quite naive of us to think,” says Jessamy. “During the entire process of getting pregnant, and being the spouse watching my wife get pregnant, I never once felt like I was less of a parent to the child that we had created together. It wasn’t until after he was born, that the state sent this paperwork that eliminated any mention of me. That was the first time we realized that we still felt like equal parents, but it became clear that other people did not see me as an equal parent.

“It was just heart-wrenching,” she continues. “It just felt like a punch to the stomach. And even though I expected that might happen, that we’d get that denial from the state, I wasn’t expecting how I would feel. And I just started crying, and I felt like someone was trying to take my child away from me.”

The Torreses sued and won, forcing officials to not only amend Asher’s birth certificate, but to change their policy for other same-sex married couples. Jessamy and Chelsea empathize with the plaintiffs in the Arkansas case, who are being forced to take their fight to the Supreme Court — an option that both women once thought they might have to resort to if Wisconsin had appealed the court’s decision on birth certificates.

“Chelsea and I never saw ourselves as civil rights activists,” Jessamy concludes. “We were always the kind of gay couple who were like, ‘We’re gay, get used to it.’ We never got in anybody’s face or tried to argue about it — we just lived our lives. When it came to our child, that changed everything. People could discriminate against me, but when it came to my son, and people trying to influence his life, there was never any doubt in my mind about how important it was to fight.”