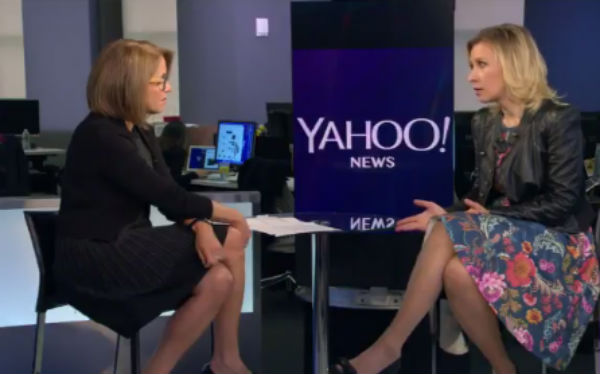 On Friday, Yahoo! News’ Katie Couric grilled a Russian Foreign Ministry spokeswoman about the ongoing persecution of gay and bisexual men in Chechnya and Russia’s response (or lack thereof) to the situation.

In the interview, Maria Zakharova became visibly perturbed after Couric attempted to highlight reports about the arrest, detention, and torture of men suspected of homosexuality in the predominantly Muslim Russian republic.

Couric questioned why Zakharova could not comment on an situation inside her own country.

Reading from The New York Times, Couric pointedly asked Zakharova what the Russian government was doing about the reports of arrests and torture that have led to the deaths of at least three men.

“Holding an investigation,” Zakharova said, “as normal countries do, in these cases.”

Couric then proceeded to read a passage from a Times editorial on Chechnya, while Zakharova attempted to cut her off, saying, “I just asked you. This is not my field.”

“You can’t speak about Chechnya?” Couric asked. She then continued reading the Times piece, which reads:

“This abominable crime by a Russian republic and its reprehensible cover-up warrant a strong response from Moscow and the international community. That would be a stretch for the Russian government, which is denying that there is evidence of any crimes and has sought to keep its own gay population invisible.”

Couric then asked: “All you can say is there is an investigation underway?”

Zakharova said she felt it was important to have an investigation, but could not provide additional details on the status of that investigation, or what it has uncovered.

John Riley is the local news reporter for Metro Weekly. He can be reached at jriley@metroweekly.com
← Previous Story GLAAD calls on Trump to condemn anti-gay persecution in Chechnya
Next Story → Russia arrested LGBTQ activists protesting treatment of gay men in Chechnya