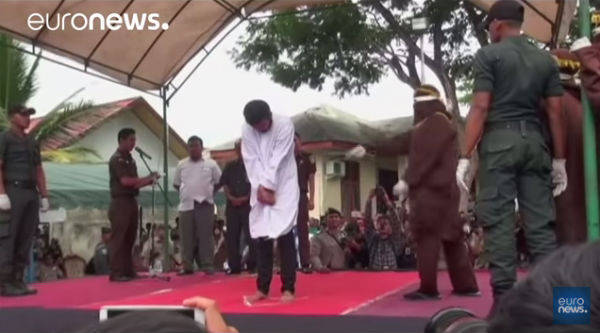 On Tuesday, two men in the Indonesian province of Aceh were publicly caned 83 times for engaging in consensual homosexual sex, marking the first time that gay men have been flogged under Sharia law in the province.

The men, aged 20 and 23, stood on a stage in the provincial capital of Banda Aceh, dressed in white gowns, while a team of hooded men lashed their backs with a cane. They had initially been sentenced to 85 lashes, but had the penalty reduced by two for the two months they spent in jail after their arrest, reports The Telegraph.

The couple was found together in bed by vigilantes who broke into their rented room in order to catch them having sex. While homosexual relations are not illegal in Indonesia, they are in Aceh province, which has been granted a special exemption to adopt and enforce laws based on a strict interpretation of Islam.

Four heterosexual couples in Aceh were also caned on Tuesday for showing affection outside of marriage, but received a far lesser number of strokes as punishment. More than 300 people in Aceh have been caned for other offenses that violate Sharia law, including gambling, drinking or selling alcohol, wearing tight clothes, or skipping Friday prayers.

The canings, which took place outside a mosque, drew a large crowd of observers, some of whom tried to capture pictures of the event on their smartphones. The crowd cheered as the lashes were dealt out.

Indonesian authorities insisted that the men convicted of homosexuality had gotten off easy, as they did not receive the maximum possible sentence of 100 strokes.

“The court’s less-than-maximum sentence of 85 lashes is no act of compassion,” Phelim Kine, deputy Asia director at Human Rights Watch, said in a statement. “It does not change the reality that flogging is a grotesque display of medieval torture.”

Josef Benedict, the deputy director for Southeast Asia and the Pacific for Amnesty International, also condemned the sentence, saying: “These men were subjects of an ambush by their neighbours who stormed into their home, filmed them and handed them over to the Shari’a police. Every human being has a right to privacy, a right to enter consensual relations, and a right to physical protection.”

The caning comes as police in other parts of the country have led raids on places where gay men congregate, resulting in multiple arrests. Earlier this month, 14 men were arrested in Surabaya and subjected to HIV tests. On Monday, 141 men were arrested in a raid on what police said was a “gay party” at a sauna in Jakarta. In both instances, the men who were arrested could face charges under Indonesia’s strict yet ambiguous anti-pornography laws.

John Riley is the local news reporter for Metro Weekly. He can be reached at jriley@metroweekly.com
← Previous Story Russian newspaper claims 26 gay men in Chechnya have been killed
Next Story → French president calls on Putin to protect gays in Chechnya