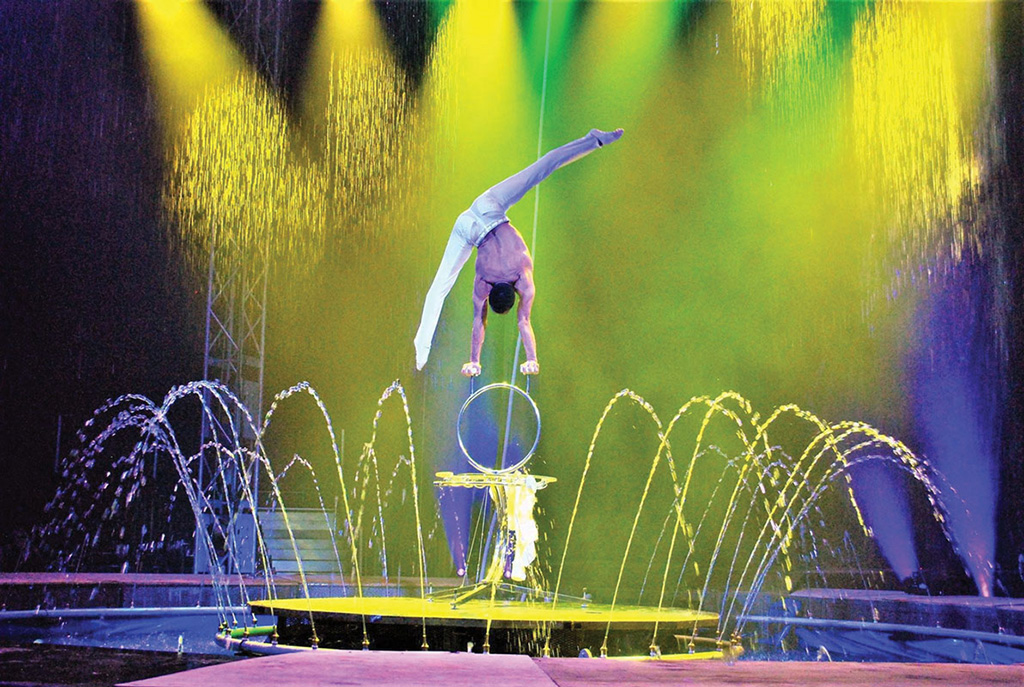 “The water, it kind of gives us a new type of animal in the business, I like to say,” says Chanté DeMoustas, the chief operating officer and producer of Cirque Italia. Dubbed the “Water Circus,” it’s a first-of-its-kind traveling production currently touring the states.

And while unaffiliated, comparisons between the Florida-based Cirque Italia and Quebec-based Cirque du Soleil often arise, given their focus on Broadway-style, multi-layered stagings and animal-free productions. “We focus on the circus arts of acrobatic talent and artists from around the world,” says DeMoustas.

Cirque Italia goes beyond Cirque du Soleil, however, in that physical artists work with water on a “custom-built, high-tech design stage.” It includes a digital water curtain, used to display graphics and images while the artist is performing.

Cirque Italia was founded by Manuel Rebecchi, a native of Milan, Italy, where his family runs Moira Orfei, one of the largest circuses in the world. Rebecchi wanted to move beyond the traditional and branch out to the U.S. He met DeMoustas, a trained dancer, in 2012 when he hired 14 dancers from her studio to develop his water circus concept. “We basically rebranded the company,” she says. “I saw a different image [based on] the response, what people were liking, and what they didn’t like.”

Under her guidance, Cirque Italia has evolved into a national phenomenon, with two big-top tent shows touring concurrently. The variety shows feature everything from clowns and contortionists to trampolinists and rollerskaters performing feats in water that defy gravity and imagination, causing spectators to wonder, as DeMoustas puts it, “How did they do a handstand bending backwards and shooting a bow and arrow, and then have the water aspect thrown into it?”

And as for the audience bearing witness to such watery wonders? DeMoustas laughs. “They may get a little wet.” –Doug Rule